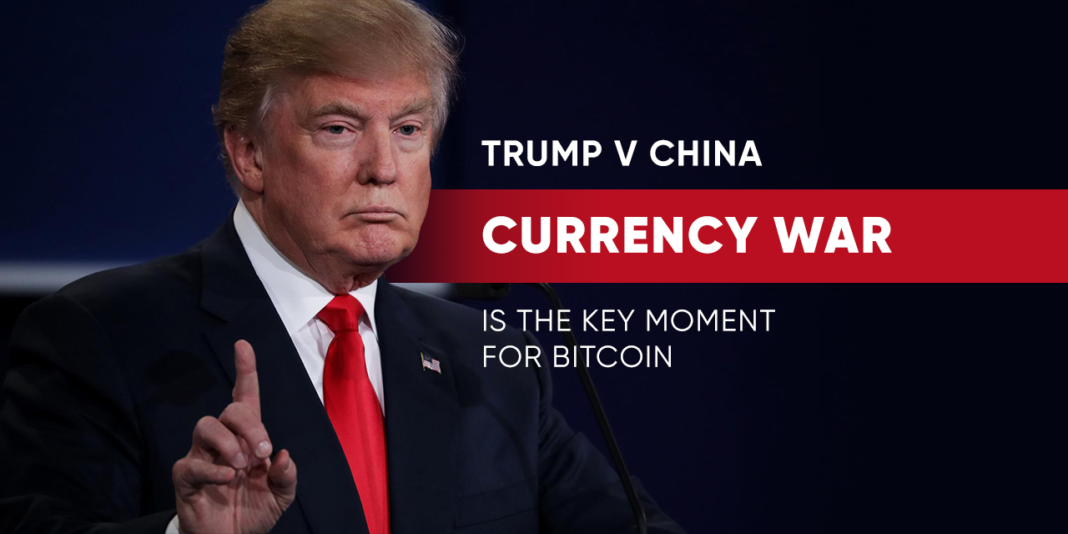 Commentator Micheal J Casey has said that Trump’s China currency barb will create a “moment to shine” for Bitcoin in the International economic arena.

Writing for CoinDesk, Casey, the chairman of CoinDesk’s advisory board and a senior advisor for blockchain research at MIT’s Digital Currency Initiative believes the growing tensions between America and China and the global economic and political turmoil that could engulf the globe is the perfect time for a shift to digital currencies.

The backdrop to this analysis came following yet another accusation by Trump towards China. After the RMB fell below 7 on the dollar, Trump accused China of being a “currency manipulator”.

The comments prompted the market to go into overdrive and talk of a currency war to match that of the trade war which has continued for much of Trump’s time in office. The currency manipulator tag could also allow the US to levy sanctions against China too.

These fears were quelled after the People’s Bank of China (PBoC) then bought into the RMB, lifting prices back to normal amounts.

Not only that, but the comment from Trump seemed harsh on reflection. Casey feels China has a good record economically and any attempts by the US to impose sanctions would surely be blocked by the International Monetary Fund or the World Trade Organization.

What are the implications?

Despite this, as we have seen in the past few years, international norms and neo-liberal institution’s powers are eroding. Brexit and the Greek crisis illustrate a failing European Union and Trump’s anti-globalization/America first message which brought him to office, show a changing mindset.

For Carey, this means markets can no longer put their faith in politicians and their actions. This could have implications for the market and he says, “don’t be surprised if we see even more extreme market turmoil over currency-war risk in the near future.”

With RMB falling, interest rates for other nations will follow a downward spiral. This could have serious implications for global economic welfare. The interest rate cuts will cause a negative consequence. Carey also pointed out:

“Bond markets are expressing investors’ worst fears: the yield on the 10-year U.S. Treasury note is now almost below that of the three-month T-bill, ominously close to an “inverted yield curve,” which has traditionally signaled impending recession and much weaker monetary policy from the Federal Reserve.”

Talk of a possible recession has been rampant. This has prompted Trump to announce that there is no recession in sight, yet many economists have suggested otherwise. Trump also definitely ruled out any deals with China, saying:

Clearly Trump is anti China, certainly economically, with the potential for it to be in other areas. Hong Kong, Taiwan and the reported treatment of Uigyhur Muslims in Xinjiang province are proving serious issues for China and their reputation on the world stage. Partner that with Trump’s volatile foreign policy and militaristic tendencies, for Carey, we could see a potential issue in a similar fashion to 80 years ago during the outbreak of the second world war.

Bitcoin can be a savior

Yet, what was a crucial difference between 80 years ago and now was the advent of Bitcoin. Much like Gold back in the 1930s, Carey believes “Bitcoin” will give people protection, “against wayward governments.”

With its “community of believers”, Bitcoin, unlike other altcoins, will provide security. The similarities it has between Gold are evident. Bitcoin’s, “digital properties are similar to those of “hard currencies” like gold: it’s hard to mine, provably scarce, fungible and transferable.”

It is clear for Carey,

“regardless of your own beliefs, a sufficiently large number of other people now believe bitcoin to be the best way to hedge against political-economic turmoil in the global financial system.”

Carey concedes that Bitcoin does have some issues to overcome though. Many governments may try to block it, fearing that it will cause an exodus of money. However, despite this, it will still be a viable option and give power back to the people, be it legal or not.

This view of Bitcoin as a savior against governments is mirrored by Nicholas Taleb, who wrote a piece on Bitcoin stating it is “an insurance policy against an Orwellian future.” Be it Authoritarian regimes or flailing democratic ones, the people have a way to circumvent their economic control.

Clearly in this world with heightened tensions and issues in economics and politics, the people affected by problematic governments need an outlet.

Bitcoin can and should be the answer.