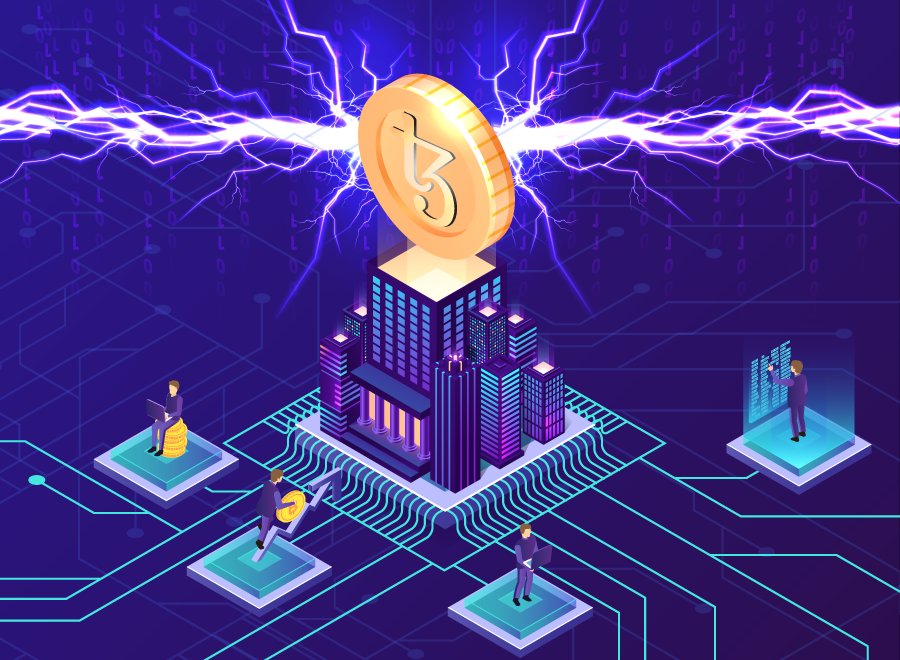 One of the most unique smart contract platforms that ever hit the crypto scene is Tezos (XTZ).

This digital currency and crypto project aims to solve the dreaded hard fork problem, which is prevalent in the crypto industry. The first cryptocurrency, Bitcoin, had gone through a total of 44 hard forks in its 11 years of existence.

Similar things have happened with many of the popular altcoins like Zcash, Monero, Ethereum, etc.

As hard forks are usually caused by disputes, the Tezos team intends to channel them in such a way that the best protocol ends up winning while the proponents of the ‘less popular’ protocol don’t move out of the network and create their own chain. Everyone knows we’ve got enough chains in existing already. There are over five thousand listed cryptocurrencies on CoinMarketCap.

In addition, the Tezos team believes that this makes the network future-proof, as the protocol amends itself through the mechanisms in place that work according to its users’ advantage.

Tezos (XTZ) is the creation of computer scientist Arthur Breitman.

Like Satoshi Nakamoto, Breitman published the Tezos whitepaper under a pseudonym, which he called “L.M. Goodman” in 2014. Afterward, he started Dynamic Ledger Solutions and passed on the intellectual property ownership of the Tezos source code to his company.

Arthur and Kathleen Breitman, his wife, tried to secure capital for the development of Tezos. After failing to attract private investors, they decided to launch an ICO instead.

In July 2017, the couple was able to raise $232 million, which was one of the largest ICO raised at the time. They later established the Tezos Foundation and appointed John Gevers, the founder of Crypto Valley ecosystem, as president.

Unfortunately, Breitman and Gevers had a falling out, which eventually led to class-action lawsuits from the SEC and Gevers stepping down from the Tezos Foundation.

Tezos is one of the most successful crypto projects to date. The blockchain platform was able to endure the crypto winter in 2018 and come out strong. Between October 2019 and February 2020, the price of tez had more than tripled.

To know more about the Tezos price movements, please see our XTZ Price and Analysis and Projections.

What is Tezos (XTZ)

Tezos is an open-source blockchain platform built for running assets and decentralized applications (dApps). It has a native asset, denoted as XTZ or tez, which is a cryptocurrency and smart contracts platform. In other words, it is programable money.

To date, there are probably more than a thousand crypto projects that utilize smart contracts and run dApps. If you’re familiar with the popular cryptocurrency, Ethereum, then you’d probably have noticed that it has a lot of similarities with Tezos. Does this mean XTZ is a copy of Ethereum? Absolutely not.

But what makes Tezos unique?

As a self-amending blockchain, Tezos contains an on-chain governance mechanism that allows the proposal, selection, testing, and activation of protocol upgrades without resorting to contentious hard forks.

Unlike most cryptocurrencies that are prone to hard forks (network splits), the team has found a method of allowing the Tezos network to upgrade by itself through an amendment process within the protocol. This process helps advance innovation quicker and drastically reduces the possibility of hostile hard forks.

In other words, only the best ‘branch’ wins during disagreements. At the same time, the losing branch still stays to support the winners.

In a way, this makes not only the on-chain governance but also the overall governance structure more decentralized as the project is decided by most users, not the leading developers or even the Tezos foundation.

According to the team, Tezos was designed to stand the test of time through this chain governance structure.

The Tezos protocol is written in OCaml, a general-purpose language with an emphasis on safety and expressiveness. OCaml enables the creation of high assurance software, which is used in mission-critical applications where a single mistake could cost millions.

OCaml has an extensive and standard library, effective for many applications and similar to Python. Furthermore, its robustness makes it suitable for large-scale computer engineering. This language is also used by large companies like Bloomberg and Facebook.

Similar to Ethereum’s Solidity, Tezos has its own smart contract language called Michelson. Michelson is a low-level stack-based language that contains no variables. It was designed to expedite what is known as ‘formal verification’, which enables users to provide proof of the properties of their smart contracts.

Unlike other programming languages, Michelson can be a little restrictive and not so easy to deal with. But that’s the purpose of its design since it also makes it so much easier to make formal verification of a smart contract program.

Essentially, formal verification is the process of proving or disproving the preciseness of a program under certain specifications. Simply put, it ensures that we can mathematically prove whether what we are trying to do will contain no errors.

Why is this important for Tezos smart contracts? Because Tezos and other cryptocurrency platforms hold value. They are digital currencies.

With that in mind, it is critical for programable money to be correct and flawless. Other means of verifying code correctness such as ‘unit testing’ does not cover all edge cases and errors that could occur in the real world, and hence, unreliable.

If we have to choose the Tezos blockchain’s biggest selling point, it would have to be its consensus mechanism, liquid proof-of-stake. Therefore, it is crucial to dig deep and see what separates Tezos from other proof-of-stake blockchains.

Proof-of-Stake (POS) is a type of consensus mechanism enables users to validate transactions according to the number of coins they hold.

Liquid proof-of-stake (LPOS) may have been derived from Ethereum’s POS, however, they work quite differently. LPOS must also not be confused with dPOS, the consensus algorithm of EOS, Tron, and many other blockchains.

The most important aspect to realized is that the objective of creating this new consensus algorithm is to maintain a modular system that can seamlessly facilitate effective on-chain governance. Again, the ultimate goal is to preserve the network and settle disputes without dividing the community.

When it comes to liquid proof proof-of-stake, we need to take note of two things: baking and delegation.

The first blockchain (Bitcoin) utilized an electricity-intensive operation called mining, which is the process of creating blocks by solving a puzzle. In the Tezos blockchain, it has a similar procedure of adding blocks in a ledger chain. But instead of mining, it’s called baking.

Bakers are users who supply the network with their computing power in order to validate transactions. And like in mining, they are rewarded with newly-minted coins (16 XTZ per block).

Basically, the higher the price of XTZ, the more bakers earn. And by bakers validating transactions, the Tezos network remains secure, censorship-resistant, and tamper-free.

In order to become a baker, you need to own at least 10,000 XTZ, which is equal to one roll. The more rolls you have, the higher your probability of winning the next block’s reward.

Not everybody wants to set up a computing rig to bake blocks nor does everybody have 10,000 XTZ. But that doesn’t mean they can’t participate in the Tezos network.

In this scenario, you can be called a delegator, since you are delegating your coin to a baker. Furthermore, you’ll get a huge chunk of the reward, with the baker taking around 10-20 percent off as fees.

Here’s a list of bakers you can delegate to.

One of the most common drawbacks of open-source blockchain projects is that when there are disagreements between the key members, they tend to split the network into two different versions and follow their own paths. Unfortunately, this causes undesirable repercussions such as a rift in the community and developers, which could impair the newly-separated project.

This has happened multiple times in the past with Bitcoin. First it was just Bitcoin. Then it forked, creating another coin, which is Bitcoin Cash. Then, Bitcoin Cash forked and a new one called Bitcoin SV came along. It will never end. And many other altcoins have had the same occurrences.

What Tezos aims to do is not to prevent the forks from happening; disagreements are normal. Their solution is to find an effective and formal procedure in determining which side wins. That way, the community does not have to split anymore.

So how does the Tezos consensus algorithm determine which side of two conflicting protocols wins? Apparently, based on the number of bakers that endorse the next block. Therefore, the protocol with the most baker votes become the canonical chain, while the losers are humbled down but remain on the network.

Bakers are incentivized to vote on the protocol they believe others will also vote for since they will be rewarded if their baker wins. So the best protocol wins, the network stays intact, and everything’s cool.

The Future of Tezos

Being a self-amending blockchain, the Tezos (XTZ) network will likely adapt and be able to navigate through the never-ending maze of crypto. Future problems are guaranteed to arise, but the protocol is built to withstand obstacles that come its way.

Tezos is continuously upgrading itself, with many of its developers exploring different to improve the network in terms privacy, better consensus algorithms, scalability, etc.

Some of the planned protocol enhancements include Tenderbake, Avalanche, sharding, and some Layer 2 (scaling) solutions.