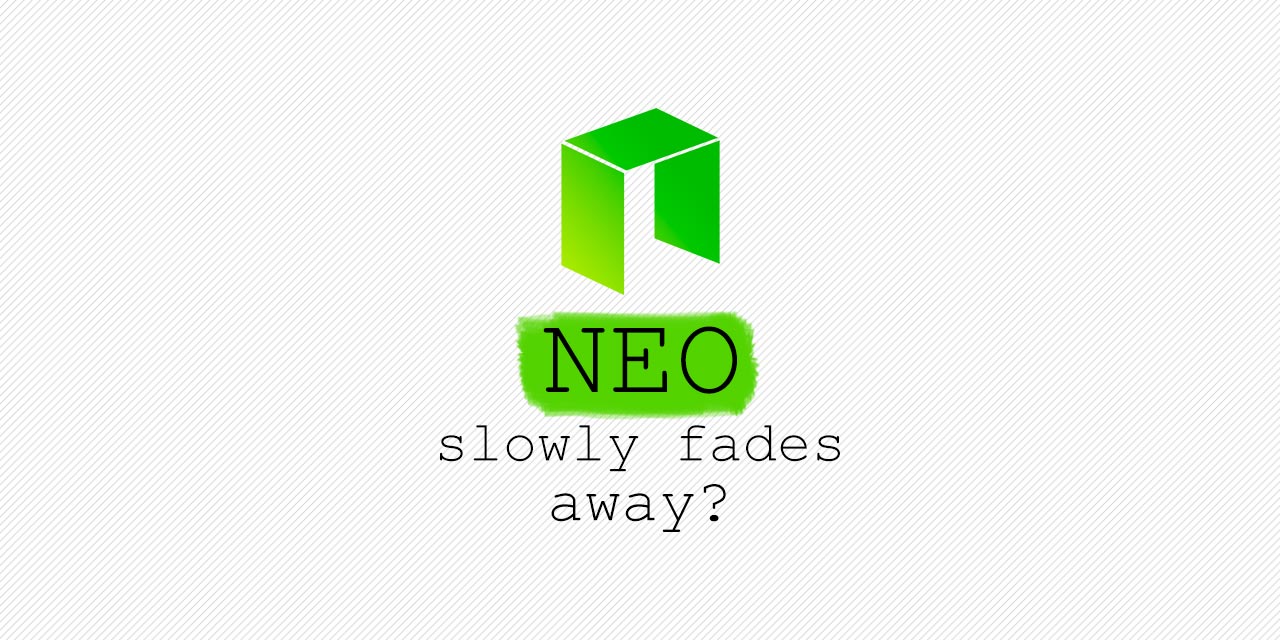 NEO, once dubbed “China’s Ethereum” appears to be in a gradual decline. Since its founding in 2014, it reached dizzying value heights of $194, as well as disturbing lows like the current price of $7.50, and its record low of $5.40. During its four or more years of operation, NEO has been a strong player in the field but has steadily met difficulties that it is not yet succeeding in getting over.

In 2014, NEO started with just 7 investors, with much of the work to grow the company being done by Da Hongfei and Wang Guan. Their early vision was quite different from the current operation that many have come to know. At first, they claimed to be all about digitizing assets and shifting things to peer-to-peer networks.

Their first ICO raised 2,100 Bitcoins from 186 accounts, which was quickly exchanged for 4,65 million RMB ($687,000). This money was used to expand the company, one result of which was their first original consensus algorithm. The full-time team also doubled in size, and the community grew to some 5,000 strong by August 2016.

The second ICO raised an amazing 5,539 Bitcoins in just 1 month ($3 288 000) — a big jump up from the first. But not long after these highs, the signs of conflict and division started to emerge and would dog the group’s development. The early vision wasn’t met with great success because of technical difficulties and regulatory roadblocks. Facing these issues, NEO changed course to favor creating a public chain for smart contracts and digital identity. This move was what first gave rise to NEO’s moniker as “China’s Ethereum.”

Their value started to rise rapidly during 2017, from $0.11 at the start of the year to $162 in January 2018. As they grew, the developed more organizations, including NEO Global Capital (NGC) and NEO Global Development (NGD). But more growth seemed to only generate more problems for the group. They were rattled by new competitors, even with their first-mover advantage. They were falling behind in technical performance and the development of a health DApp ecosystem. It was, in general, a lack of good strategy that was holding them back.

The typical public chain was focused on consensus algorithms, smart contracts, cross-chain technology, and related services, and their good work was reflected by a strong rate of transactions per second (TPS) and a friendly welcoming developer community. NEO made use of its own fault-tolerant consensus algorithm that proved effective in achieving a far-reaching node participation consensus. While most were using POW (Proof-Of-Work), NEO did their own thing, which is among their most impressive feats. In the lab, they even boasted a TPS rate of 1,000, though it was more limited in its application when you factored in the needs of security.

By July 2018 NEO had 7 consensus nodes but faced criticism for maintaining centralized control over them. It was only when the NEO developer community CoZ and Dutch Telecom company KPN elected to use the NEO nodes in July and October 2018 respectively that they finally decided to take the first steps to decentralization. This failure to get right on board with decentralization, for some, was a cardinal sin.

No power to the community meant not acting in the true spirit of the industry. Some disagreed with this, saying that a more cautious centralized approach, in the beginning, was a good move. Criticism still continues, however, when we see that the NEO Foundation controls 50% of the NEO tokens, and thus much of the voting power when creating new nodes in 2019.

Even while criticized for its centralized model, few have doubted the strength of NEO in the realm of smart contracts. Their NeoVM (NEO Virtual Machine) has been described as an industry-leading item, supporting many traditional development languages including C#, Java, and others. It doesn’t however, support Ethereum’s Solidity, so Ethereum developers have not taken to it in the same way.

In some ways, NeoVM reflects the company’s general problem when it comes to technology – they’ve improved key foundational aspects like security and reliability in smart contracts, but have done nothing to revolutionize the blockchain network.

Other big problems may explain why NEO is now being perceived as “disappearing,” the biggest of which is its developer community. Despite its reputation for community building, NEO has done little to create an ecosystem that attracts large numbers of developers to the platform. This, in turn, means there is less output to attract users.

Figures from TokenView show that NEO’s transaction volumes are in a downward trend, unlike those on Ethereum EOS and Waves which all show either stability or an uptick in transactions as developers continue to expand the ecosystem with new items.

Another problem they experience is in a lack of unity, with core team members splintering into other organizations like Onchain, which is now having considerable success. NEO has always encouraged entrepreneurship and independence as part of its ethos, but that may have backfired as core value-adding team members splintered, leaving NEO with a stagnant development and lacking the sparks of creativity that they need to succeed.

Faced with a lack of a good ecosystem for third-party developers, a poor marketing strategy, and divisions which have diverted away key talent, it’s hard to see how even the upcoming NEO 3.0 will save the company. NEO 3.0 doesn’t yet have a clear timetable, and there may yet be months until its release. Who knows what can happen in this dynamic industry during that time? Perhaps NEO will be left behind again.