Skyward Finance is a NEAR-based permissionless and open-source launchpad that enables projects to launch their tokens without the need for liquidity.

Any industry that is only exploited by deep-pocketed and well-connected entities cannot possibly flourish for long because of the deliberate restrictions of opportunities perpetrated by a few parties and individuals. This deep-rooted problem is one of the major things that Web3 wants to uproot by democratizing industries through blockchain technology and bringing an increased power and voice to the common people.

Skyward Finance was established to introduce a fair token distribution and price discovery for NEAR-based projects.

It wants to level the playing field between project founders with limited resources and participants with bigger funds during token sales to create a fair competition.

What is Skyward Finance?

Skyward Finance is a NEAR-based permissionless and open-source launchpad that enables projects to launch their tokens without the need for liquidity.

Skyward is integrated with the best price discovery mechanism and can endure high-damaging threats such as sybil attacks and bots.

Its main smart contracts are completely autonomous, which means that any project can create its sale anytime, without having to go through a tedious process and multiple entities. Also, project founders can create their preferred token pair and create a market for it, allowing them to gain profits as early as possible through a straightforward process.

Skyward protects projects from price manipulations that help founders increase their capital based on fair market share value established mainly by demand. Also, the platform prevents founders from being too tied up in one area of their venture as it facilitates a “hands-off” solution that helps participants continue developing their product (while) raising money at the same time.

And since it’s based on NEAR, Skyward can seamlessly link with the Protocol’s other decentralized finance (DeFi) components, which include Sputnik DAO, Ref Finance, and NEAR Web Wallet, platforms that will be briefly discussed later.

Influencers can also earn from this platform by supporting their preferred project through viral campaigns that provide clear and positive results.

They also have to pay a fee equivalent to1% of their token’s total supply which would help Skyward to be a sustainable platform for all stakeholders.

Skyward’s system was built to prevent bots’ automated reaction time from outsmarting platform users by making sales split linearly over the duration of the sale instead of being instant.

It also eliminates pump and dump activities by preventing users from reselling tokens in the same pool right away.

On top of these things, its system has no limit orders to prevent anyone from doing unethical things such as pumping a price by withdrawing their orders

SKYWARD is the native fungible token of Skyward Finance and has a max supply of 1 million tokens.

One notable thing about the token is its distribution model, where it did not go through the usual route of pre-sale and private rounds.

Instead, 90% of its tokens will be sold through public sales, making SKYWARD tokens more accessible to participants with limited funding and connection.

Proceeds of the sale will go straight to the Skyward Treasury, a component of the platform that implements a 1% charge on every sale made.

But projects that use SKYWARD tokens are exempted from the 1% treasury fee to encourage projects to use the native token.

Holders of SKYWARD will have the privilege of passively earning a 1% fee from ongoing and future sales on the platform.

NEAR Protocol and DeFi Projects Built on it

Here’s a quick refresher of what NEAR is and a background on some of the top Defi platforms using its blockchain.

NEAR Protocol is a proof-of-stake (POS) blockchain with three major features: 100,000 transactions per second, near-instant transaction finality, and up to 10,000 times cheaper transactions than Ethereum.

Sputnik DAO is a hub of decentralized organizations (DAOs) that helps strengthen the entire NEAR ecosystem and all its stakeholders.

The platform is equipped with advanced tools for on-chain representation, coordination, and decision making and rewards users who submit robust proposals on existing DAOs.

Ref Finance is a marketplace for NEAR-powered tokens and serves as an automated market maker, liquidity provider, and facilitates LP token staking. 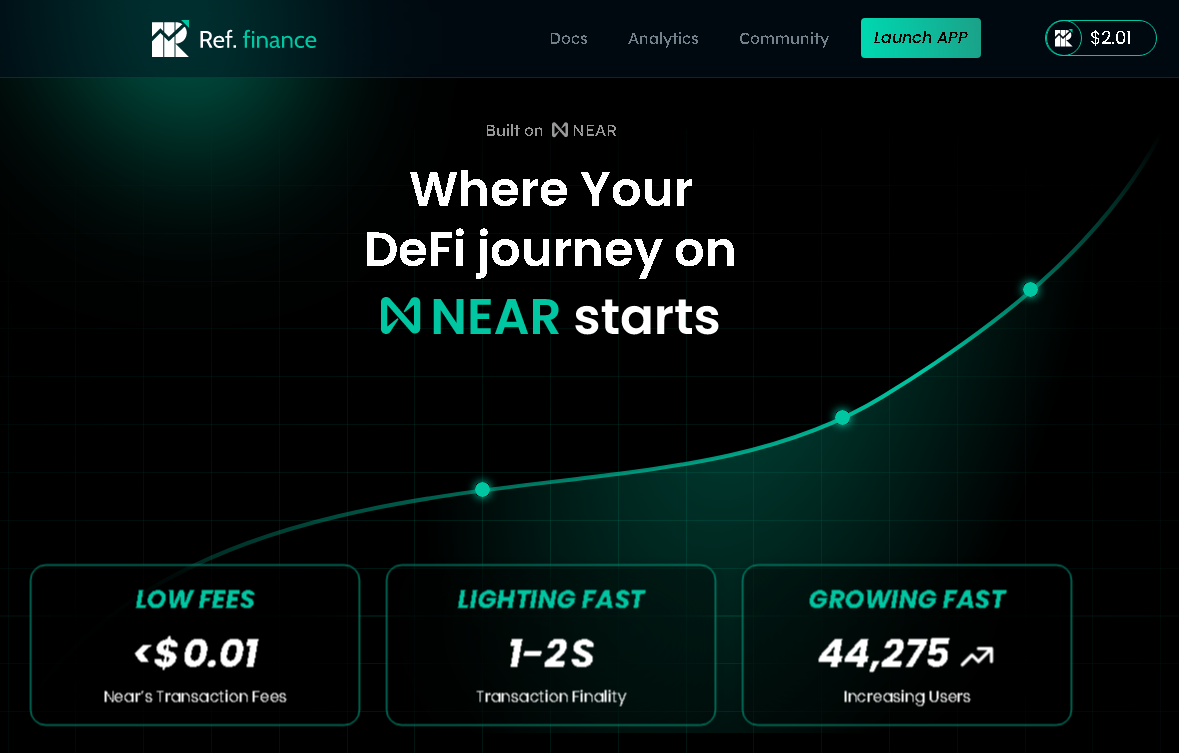 Skyward Finance’s significant efforts in creating a level playing field for project founders with limited funds and connections will likely create a positive ripple effect on the blockchain industry. Through this launchpad, more Web3 developers will likely be inspired to create highly beneficial projects that can provide genuine help to society.