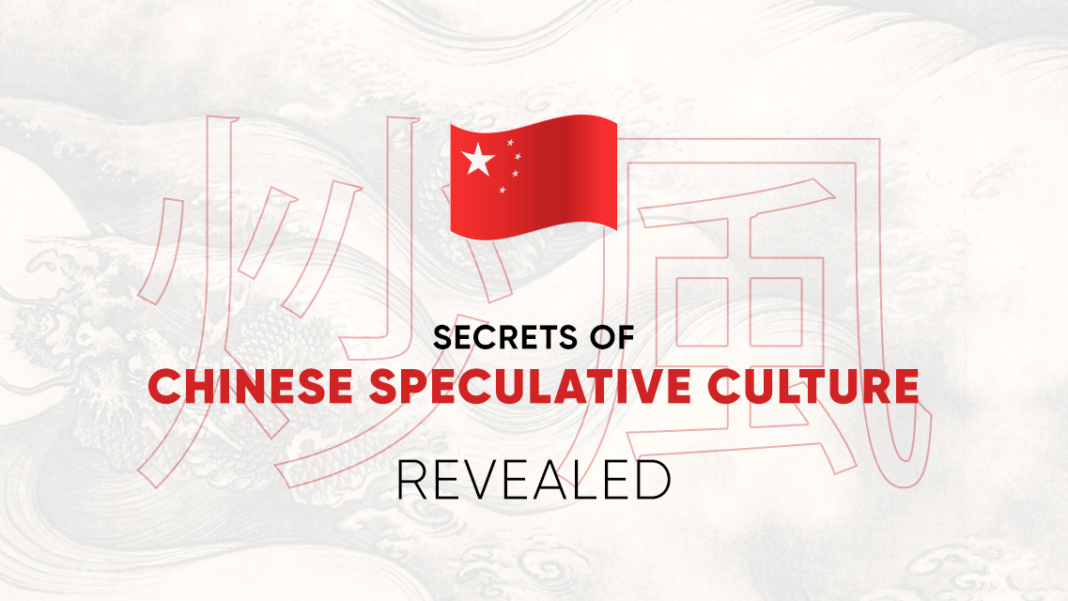 In Chinese, speculation is referred to as “炒”, i.e. to fry. This term comes from the idea that when you fry something, you make it hotter i.e. more popular.

The Chinese speculative culture is an interesting one. In the past two decades of relative economic boom, many sectors of the economy have grown exponentially. In any market with such capital and asset movement, understanding the underlying speculative trends is vital. Speculation stretches across various sectors and defines consumer and investor behavior alike.

Speculation in the Sports Shoe Market? The iPhone Market?

One of the most fascinating areas of study is the price trends is in China’s sports shoes market. This sector can be viewed as two tiers of operation.  These being the primary and secondary market respectively. By this, the primary market refers to the officially sold market, such as online and offline shoe stores. On the other hand the secondary market is via the several major non-official mobile apps for trading. In the Chinese market, the dominant shoe prices platforms are the AJ index, Nike index and Adidas index. To illustrate the size of this market, the turnover of 26 popular models on August 19th 2019, among the top 100 sneakers, reached 4.5 billion yuan.

The trend of hyping shoes has really caught on in China.  As a matter of fact, the level of speculation is showing similarity to speculative stocks! The speculative shoe sector is booming and has attracted entrepreneurs who want to cash in on the boom. For instance, the collaboration between Adidas and Rapper Kanye West to release new shoes- the Coconut 2 showed this clearly. Whilst the initial selling price was only 1999 Yuan, the price could go up a staggering 15 times if you line up to get the shoes from the shop on day one and sell it to eagerly waiting buyers outside for 30,000 Yuan.

This has brought forth a phenomenon called the ‘hyped shoes’ game. Between dealers, the prices are standard but with market speculation and customers willing to go the extra brand to get specific brands, the hype can result in exponential price rises.

Another upcoming recent source of hype will be the new Apple iPhone 11s and 11 Pros. Already people are racing to pre-order the phones and major news outlets are releasing price lists on how much people can expect to sell it for to electronics stores. For example, with the iPhone 7, people in Hong Kong took advantage of the earlier release date than China. They snapped up the phones on the first day and immediately sold it to scalpers outside the stores or brought it to China. Some of these people were able to make US$130 profit just buy doing this.

Other fried commodities in Chinese market history include: orchids, in early 2000, which reportedly made more than drug trafficking. There have also been periods of real estate and coal hype when the sector was liberalized. Therefore, speculation is a part and parcel of Chinese investor trends and has shown the same rhyme as moments before in history.

The Extent of Speculation

According to Hyundai Express, a shoes speculator like Answer824 operates a short video platform with nearly 160,000 fans. On this he showcases about 40 pairs of Tide shoes, some in the new shoe box and some in the cabinet. In the lot, the Nike Air Yeezy2 from 2012 is a classic example having risen in value from 2,000 Yuan in the past to 50,000 Yuan now. Demand for the shoes is pretty strong and fervent customers’ line up to buy shoes from these stores. In recent times, this phenomenon has led to the rise of dozens of WeChat groups just to discuss shoe prices.

The speculative shoe market is really pushing the envelope. In July 2019, an auction of a pair of 1972 Nike shoes sold for a world record 3 million yuan at Sotheby’s auction. The global shoe market is worth tens of billions and dollars and is set to grow. That said, the speculation game in such brands is still unprecedented. What remains a fact is that as long as there are people who think the shoes are valuable, they will continue to be hyped. Therefore, it is a game that many are waiting to ascertain its sustainability. For now, the question of whether who between people investing big in this subsector, or the consumers who pay hyped prices is more stupid is lingering.

Major shoe brands like Air Jordan have certainly been happy to play into the speculative culture. However, this has created psychological scarcity effects, and it is impossible to create real value scarcity. The problem lies therein. Speculative shoes are pricy, not for their actual value and ease to wear but on account of the notion of scarcity. How far is the cycle of ‘frying’ sustainable?

The ban on crypto trading activities has dampened the market dynamic of cryptocurrency in China. However, the speculative culture that underlies the shoe market carries over into other sectors. Bitcoin has had its own history as a speculative commodity.

On the other hand, mining machines are operating in the in the direction of intensive, large-scale professional institutions. This makes speculation in the cryptocurrency market a bit different since the human and brand factors that come into play cannot be replicated in the cryptocurrency sector.

Like most other countries, China’s wealth is mostly skewered towards the top 1%. This portion of the population owns 45% of the wealth and 110,000 of households have over 100 million yuan of assets. Of these, 80% are business owners and real estate speculators. In short, wealth in China is mostly concentrated in a very small group of people.

Ordinary Chinese families, whether farmers or in administrative enterprises are largely unable to access this kind of capital. Therefore, Chinese investors can look to sectors that have risen exponentially in recent years such as real estate for opportunities. This has made more people desire wealth as the economy gets more market oriented. Investment in equity is attractive to many traditional investors as can take a close look at stock performance. Although many are deterred by the rumours that the Chinese stock market is highly manipulated, again by the top 1%.

The real estate market has taken off in the past two decades. This fueled a rush of investors into the sector. However, the real estate sector has subsequently come under regulation and control policies. This has resulted in the real estate investment price ratio much smaller than before.

For many Chinese investors, the tendency to go into highly speculative asset markets is not surprising. After all, the nature of markets, whether sneakers, orchids, or real estate in the early days all had are relatively low barriers to entry, and have lower requirements for funds and connections, making more people participate.

In particular, the desire for wealth is strong and is deeply rooted in the Chinese mentality of keeping up appearances or “面子” (having face). Unlike in other cultures, flaunting your wealth is revered in modern Chinese society. This was seen in the previous “exiting car” challenge were people lie down on the street having seemingly fallen out of their luxury cars with their designer accessories and latest gadgets scattered around them.

So having the latest car, phone or the rarest pair of sneakers is encouraged and gives people their desired boost in reputation and credibility amongst their peers. And those who show off their success or teach people how to speculate on cryptocurrencies and other commodities are referred to as “Gods” by netizens.

These tenets seem to underwrite the speculative patterns in the Chinese market. These similarities can carry over to speculative cryptocurrencies as well. This is because provided there is possibility of profit, whether in shoes or cryptocurrencies, Chinese speculators are sure to jump into the fray.