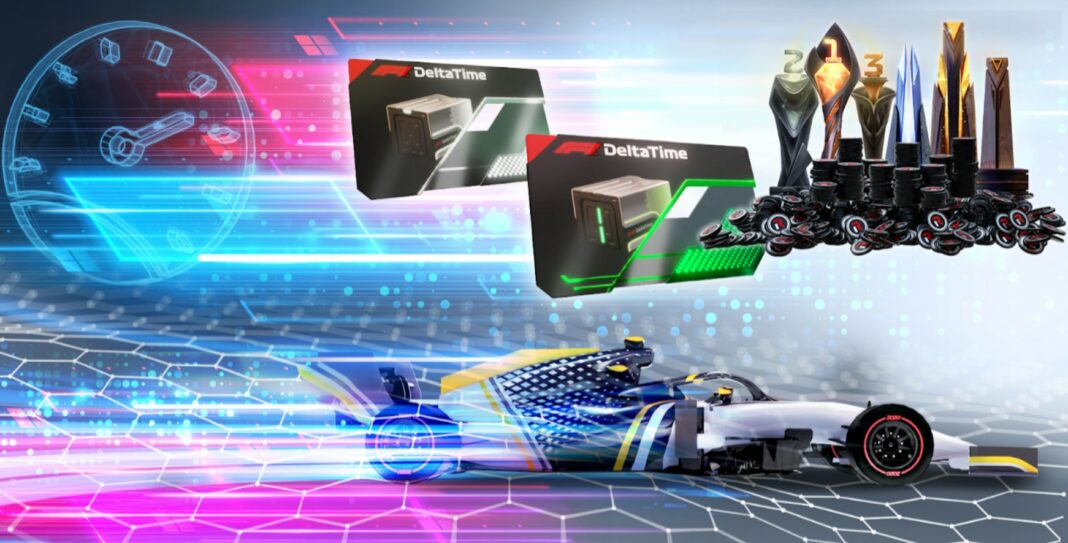 REVV token is a fungible digital asset that is used as the in-game currency of multiple motorsports games released by Animoca Brands.

Blockchain gaming has been gaining ground in the community in the last 2 years, with the wide acceptance of non-fungible tokens (NFTs) and creative minds like Animoca Brands, the future looks promising for the crypto subsector. As blockchain technology and versatility offer users unique sets of opportunities and use cases, the gaming space has seen a huge increase in decentralized projects.

Among the most recent ventures is Animoca Brands F1 Delta Time, a racing game that relies heavily on decentralized financing, as the REVV token is the backbone behind its functionalities and features. Just like SAND in the popular game The Sandbox, REVV is the glue, merging both gaming and DeFi within the highly interactive F1 Delta Time ecosystem.

REVV opens up both blockchain enthusiasts and motorsport fans to a new gaming experience while retaining the core values and concepts of the blockchain.

At its core, REVV is a relatively new and ambitious venture by blockchain gaming developer Animoca Brands. The fungible asset plays a pivotal role in the companies most recent gaming project, F1 Delta Time. Running on the Ethereum blockchain, F1 Delta Time is a blockchain-based game released back in march 2019 and has seen considerable success in the blockchain community.

Animoca Brands, the team behind the project has been a leader in the blockchain ecosystem for some years and has released many products, namely The SANDbox, Garfield games, and Crazy Defense Heroes. The team is composed of numerous experts in gaming and blockchain technology.

Animoca Brands has been around since 2014; founded by Yat Siu in Hong Kong. The Gaming company has managed to form partnerships with the likes of HTC, Atari, Coincheck, iClick Interactive Asia Limited, and Veloce Esports.

Back in 2020, the company recorded a revenue of 38 million USD and already managed to raise 1 billion USD in 2021 alone.

Built on the Ethereum network, the newly introduced REVV token is a fungible digital asset. Furthermore, REVV is the exclusive token or in-game currency of multiple motorsports games released by Animoca Brands. Games like F1 Delta Time, MotoGP, and the Sandbox are among very promising blockchain gaming projects produced by Animoca Brands. 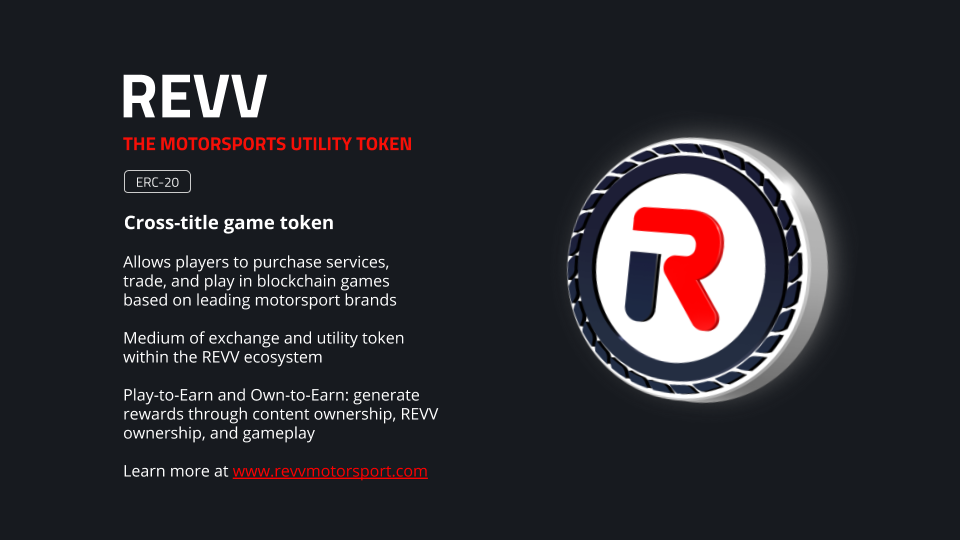 Described as a true utility token, REVV is your conventional ERC-20 token used as a cross-title asset. Additionally, the coin is the backbone and driving force behind Animoca ‘s Play-to-Earn model. In general, the token enables holders or players to buy, trade, and play games powered by the blockchain.

REVV is a unique and efficient token as it allows multiple contract operators whitelisting to provide approval-free REVV tokens transfers deep in the company’s contracts protocol and algorithm. In return, this enables participants to push crypto transactions on the blockchain using the REVV token as the payment token for the gas; thereby not relying on the native ETH token at all.

Currently, Animoca Brands is also developing a blockchain game based on FIM Road Racing World Championship Grand Prix, also known as MotoGP.  According to the Animoca Brands team, “ The MotoGP game will combine the experiences of strategy and management with the intense thrill of motorcycle racing. REVV will be the core currency of the MotoGP title, similarly to the way it is utilized in F1 Delta Time”.

As of now, very little is known about the continuous development of the game, however, it is fair to assume that the token will be at the very center of its mechanism.

Overall, approximately 3,000,000,000 REVV tokens are circulating on the market,  where 43.3% accounts for the reserve, and 30% has been allocated exclusively to Animoca Brand’s gaming projects. Furthermore, the team and advisors behind the token share around 10% of the token distribution; IDO and player rewards reserve also benefit from 8.33% of the token supply respectively. 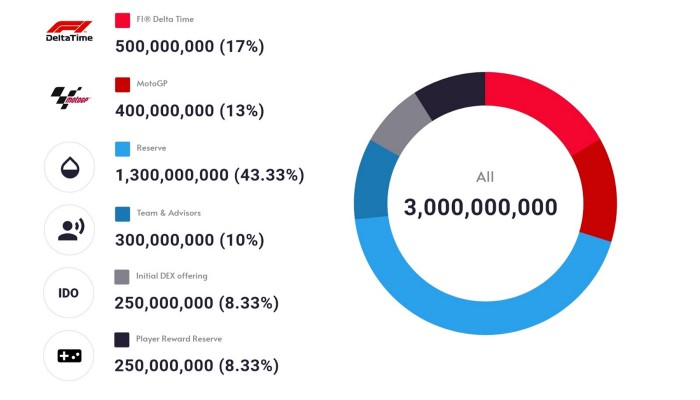 The team behind Animoca has assured that reserve REVV tokens will only be available when new projects are added to the REVV ecosystem. A total of  1,500,000 tokens is set to be drawn from the player Reward Reserve and given over 4 months to numerous F1 Delta players and participants.

As for the IDO allocation, it is comprised of around 7,500,000 REVV for an upcoming Flash Sale and tokens released on Uniswap. The Flash sale tokens were set aside exclusively for players of F1 Delta, with an initial offer price of US$0.00666 per REVV. So, in the Initial 250,000,000 DEX Offering on Uniswap, 150,000,000 tokens were sold for US$0.00666 project partners and liquidity providers.

The REVV team has ensured that approximately 100,000,000 REVV are securely locked. They were released in a 3 months span, which started back in September 2020.

So far, REVV has shown to be a promising and effective tool for Animoca Brands. The token has a wide array of use cases, namely:

As explained by the team behind the project, REVV is predominantly being used to purchase exclusive F1  Delta Time NFTs. It is understood that the total number of NFTs available for purchase will be directly proportional to the amount of REVV tokens in circulation.

A portion of gameplay fees collected in each race will be used as player rewards to be given to players based on their race performance and result. Additionally, some portions of the gameplay fees will also be paid as dividends to all track owners.

A game operation pool has already been introduced and is set to provide gameplay incentives as new features are released by increasing the rewards for initial engagement.

In general, race car (NFTs) owners have the possibility to stake their NFTs to earn REVV. The total amount of tokens to be earned will be determined by the rarity and value of the NFT(s), as well as the length of the staking period. Moreover, participants can also stake REVV tokens, and in return receive additional dividends as well as NFT(s).

The Staking pool of 6,020,000 REVV has already been reserved for all 2019 race car NFTs, with this pool being active for 12 weeks after the launch of the Staking feature.

Predictably, blockchain gaming is gaining ground in the decentralized ecosystem. This is mostly thanks to the increasing popularity of NFTs and the seemingly unlimited versatile characteristics of utility tokens like REVV as the token effectively manages to merge both gaming and DeFi within the highly interactive F1 Delta Time ecosystem, and a soon-to-be Motor GP gaming venture.