In recent years, there has been a rise of new sector within the blockchain ecosystem, which is decentralized gaming. The blockchain algorithm offers users a wide variety of use cases through its versatility, so, it’s no surprise that game studios like Animoca Brands and Pixowl would rely on the technology for their gaming project, The Sandbox.

The Sandbox offers a whole new outlook on blockchain use and implementation. Through its unique system, players both familiar and unfamiliar with the blockchain are now introduced to this new type of application within the crypto ecosystem. The Sandbox has successfully managed to merge both the world of gaming and decentralized finance (DeFi) within its highly interactive ecosystem.

At its core, The Sandbox is a mobile game that was first released in May 2012 on iOS and Android platforms by gaming studio Pixowl. In 2018, Animoca Brands acquired the project for $4.875 million and incorporated a Voxel-style blockchain algorithm in the game. The aim was to use the DeFi concept to facilitate buying and trading within the game using the game’s very own cryptocurrency, the SAND token.

So far the project’s team has raised $4.51 million in investment for the blockchain-based game. Among investors are, square Enix, B Cryptos, True Global Ventures, Helix, Mind Fund, Blocore, ThunderCore, and Alexis Bonte from eRepublik. As of now, the Sandbox has more than 40 million downloads and an impressive one million active monthly users.

What is The Sandbox?

Here, even players unfamiliar with decentralization get a first-hand experience of the utility of the technology.

Additionally, creators can embellish their LAND with ASSETS, as well as implement unique gameplay mechanics by assigning default behaviors to the ASSETS. Players can manage to do all this through visual scripting nodes; subsequently allowing them to turn a LAND (ERC-721 token) into a full game experience.

Unlike the current game market, the decentralized game The Sandbox strives to move away from the centralized ownership and control of user-generated content, which limits players’ rights and ownership. Subsequently, the drive behind Sandbox is to accelerate blockchain technology adoption and grow the blockchain gaming sector.

Running on the Ethereum blockchain , SAND is an ERC-20 utility token used as the basis of trade and transactions in The Sandbox ecosystem. SAND is the backbone of the gaming experience as it adds value to the game through the implementation of aspects of DeFi in the game.

Let’s take a look at its use cases.

Additionally, SAND facilitates the acquisition of ASSETS and LAND. As for in-game LAND sales increase, the demand for SAND goes up creating a viable decentralized market within the game environment. Players can also spend SAND by placing ASSETS in the marketplace, allowing trade between users.

Furthermore, token holders have the freedom to exercise voting rights in regard to key aspects of the decentralized project; namely grant attributions to content and game creators, as well as feature prioritization on the game platform. 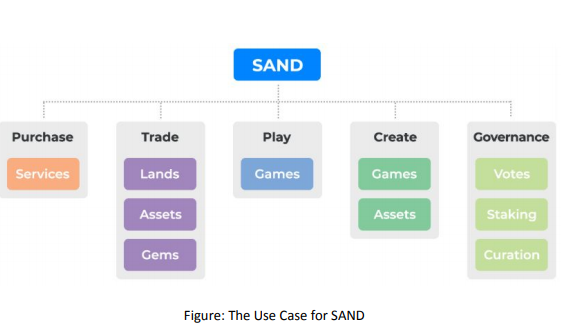 The Functions of In-Game Tokens

In addition to SAND, the game ecosystem is composed of a wide variety of Ethereum based tokens.

In-game ASSETS are represented by ERC-1155 and ERC-721 digital Assets for storage and trading within The Sandbox. The protocol allows for a smart contract to track token-ownership at the individual token level.

Furthermore, all ASSETs have their very own identifier and unique properties stored as metadata. Crypto wallets that support ERC-1155 and ERC-721 would able to use the game ASSETS.

● CATALYSTS (ERC20) – allow users to associate GEMS to an ASSET

All of these token contracts are responsible for tracking the address minted in each token, as well as ownership and transfers within the game. The Sandbox team relies heavily on NFT’s as they strive to empower players since such cryptos are indivisible and not interchangeable. 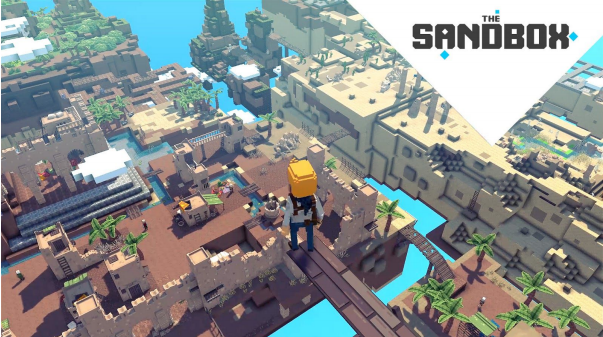 For a year now, the expansion of decentralized technology seemed to rely solely on the DeFi sector. It’s time for a change of pace. The rise of decentralized blockchain-based gaming platforms opens a new and unique avenue for the propagation of blockchain technology. Through its unique algorithm, the blockchain is set to impact the gaming sector by enhancing traditional gaming concepts through decentralized protocols.

The Sandbox introduces blockchain users and non-users to an immersive experience, powered and enhanced by the blockchain. Through its decentralized user-generated content, players and creators are empowered to sell, trade, and uniquely own all their Assets supported by SAND. Overall, The Sandbox has managed to beautifully merge both gaming and DeFi within its highly interactive environment.

The blockchain gaming industry is definitively on the right path, as it seems that everything the blockchain touches is for the better. Gaming Projects like The Sandbox testifies that decentralized technology has the capacity to revolutionize the gaming sector.