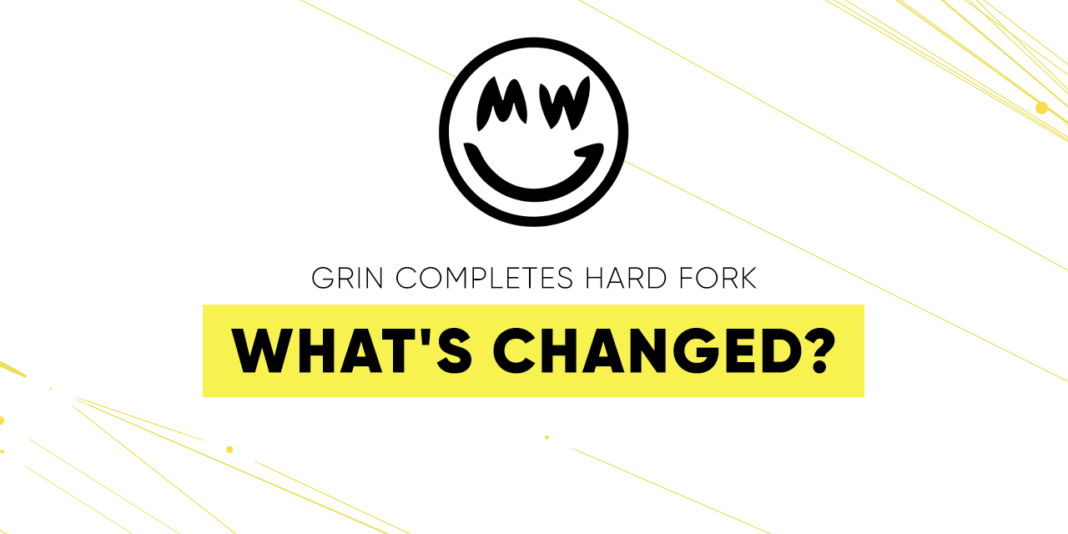 The privacy-oriented cryptocurrency Grin has completed the first hard fork on its mainnet. The fork took place at block height 262,080 on July 17 essentially implementing the backward-incompatible upgrade.

Grin platform launched in January 2019 and currently has a market capitalization of about $60 million. Accordingly, these changes will optimize the network for maximum miner decentralization and usability.

After the fork, users will have to simply update their software to continue in the network. This is different from classical forks like the Bitcoin fork which resulted in network splits to form other networks like BCH.  Developer John Tromp explained it as follows:

“In a classical fork, the chain can split into two mutually incompatible continuations. … In Grin, there is no way to continue growing the ‘old’ chain since the old code refuses to accept any blocks past the [hard fork] height.”

Moreover, this hard fork will discourage Grin mining through dedicated application-specific integrated circuits (ASICs). As such, the move will include a new edition of the bulletproof rewind scheme for Grin wallets.

Is ASIC Mining Still A Problem?

Trop admitted that there is no sign of users using ASIC rigs to mine Grin yet. That said, Grin’s secondary Proof-of-Work scheme Cuckaroo29 is for the purpose of continual iteration to crack down on ASIC mining. ASIC mining is notorious for making Bitcoin mining essentially centralized as desktop mining is pretty much unprofitable. As such, the developers intend to curb this ability to a small number to control mining profitability metrics.

“In the 133 days of Grin mining so far, there is no sign of any ASIC mining. We do know of several ASIC products planned to come out in summer. To the extent that any such ASICs have built-in support for Cuckaroo29, we want our tweak to bricks that support.”

Therefore, these developments go to show the commitment of the developing team to combating ASIC mining. In essence, it is even pre-emptive in nature as the ASIC mining is not at a level that is enough to raise centralization concerns.

The Nature of The Fork

Grin had previously proposed a mainnet for the same height but on June 5th. The developer also intended to con continue hardforking its mainnet at regular intervals. Accordingly, each fork occurs approximately once every six months upon reaching 262,080 new blocks.

With the execution of the hard fork on the mainnet, the network will no longer recognize transactions on the blockchain before the effective date.  Notably, Grin also uses the Mimblewimble protocol. This interesting project has the name of an eerie tongue-tying curse from the popular Harry Potter fantasy series and can facilitate obfuscation of transactions. This will add to user privacy and limit double-spending. Accordingly, the network can now go by the tag of a lightweight Mimblewimble blockchain.

This network is simply trying to implement changes that give it a competitive edge in the market. Even though ASIC mining is not an evident problem, the developers saw it fit to implement the changes. The coming few months will be interesting for this network. This is because the platform has the potential to generate up to $100 million from its mining annually. Therefore having a more level playing field on that front improves overall network participation and utilization