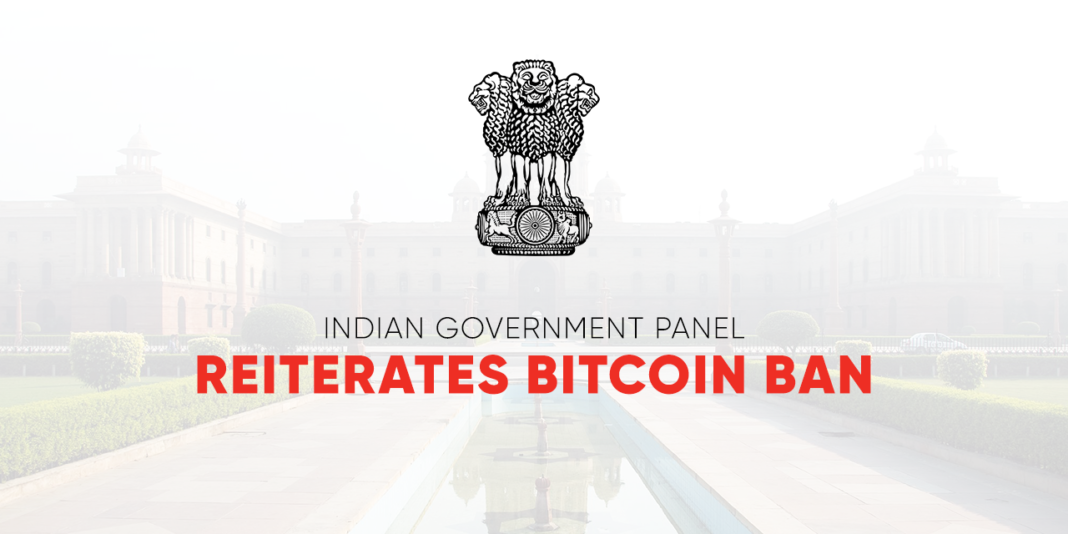 An inter-ministerial panel has recommended that India enacts a ban on cryptocurrencies like Bitcoin.  This comes even as governments worldwide, including India, acknowledge the merits of Decentralized ledger technologies (DLTs), making possible changes to crypto regulations possible in the future.

This is actually a confirmation of fears for many cryptocurrency startups in the world’s second-most populous country.  The government has had these intentions for some time. Even then, the finalization of efforts to criminalize all commercial dealings in private cryptocurrencies is still a big deal.

An inter-ministerial committee set up to make recommendations on regulations made the conclusions. The committee had the Secretary (Economic Affairs) as the chairman. He worked with the ministry of electronics and information technology as well as Reserve Bank of India governor.

The recommendations are that individuals face up to ten years in prison for general use of crypto in India. This is besides many fines for violations of the ban on cryptocurrencies. The ban comes as a blow to the hundreds of thousands of virtual currency holders in the country. India will hence become one of the harshest regulatory regimes for cryptocurrency.

The Dichotomy of The Panel Recommendations

Despite this stance on cryptocurrency, the panel had different views of the underlying technology. This is because the report admitted that DLTs can indeed have positive use cases, especially in finance.

The fact that DLT uses local electronic ledgers that synchronize and share the data is obviously a motivation. The trustless nature of the blockchain makes it more efficient and secure than traditional servers.

Accordingly, the committee observed that DLT will play a critical role in the digital future. The applications of the tech in trade financing, improving access to credit and streamlining KYC are immense. India has many developers researching and developing this tech. The softer government stance is, therefore, a logical assessment of the potential of this technology in the near future.

Even more interesting is the question of whether India will look to develop its own national cryptocurrency. To this, the committee has recommended keeping an “open mind”. The proposition of a digital rupee is an interesting development.

In recent weeks, many governments across the world have also initiated research on national DLT based cryptocurrencies. The announcement of the launch of Libra coin set all this into motion. This is because of the sovereignty implications of a global cryptocurrency.

Accordingly, the committee stated that the government should consider its impact on existing payments infrastructure, and financial stability. India is still reeling from a problematic currency renewal effort. As such, you can understand why the regulators are careful with Central bank digital currencies (CBDCs). Their impact on existing payment channels, in particular, is fascinating.

Moving forward though, India will clampdown on mining, holding, selling or issuing private cryptocurrencies. The actual implementation of these measures will be interesting given the virtual nature of cryptocurrency.

In other news, the much anticipated Supreme Court ruling on the RBI ban on Bitcoin transactions in India has been pushed back again to July 25th and a final hearing on August 2nd.