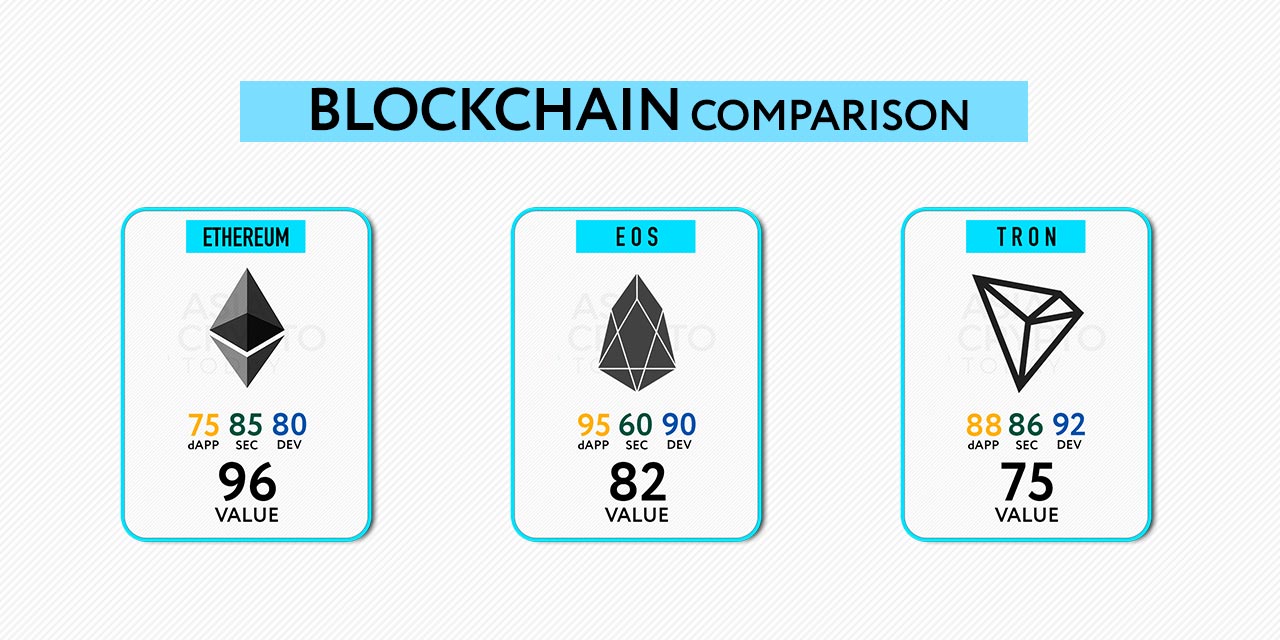 Public blockchains appear in 2019 to be ruled by three prominent players in the market – Ethereum (ETH), EOS.IO (EOS) and TRON (TRX). But who rules the roost and what are the positives and negatives of each one, here at Asia Crypto Today we have compiled data and facts to give you a complete comparison of the three kings of public blockchain, through the cards

The categories will be:

After going live in 2015, Ethereum has been the industry leader in public blockchains with the majority of coins and crypto Apps using the network. Yet, in more recent times it has had more competition and encountered some issues. Now in 2019, it is still the Godfather of public blockchains, but for how long?

DApp:ETH currently has 1348 Dapps.According to Golden Finance statistics found that in the top 10 Dapp, there is only one ETH Dapp and just six in the top 50. Eth’s unpopularity and problems may be because the ETH confirmation time is too slow, the average block time is 15s, and the 6 confirmations take one and a half minutes. It appears that Ethereum is behind and has not mastered the Dapp as well as the others.

Security: Because ETH is a relatively mature company, they are very good at defending attacks and are rarely breached. They are now attacked now significantly less than those of EOS. Although the new fork could prove problematic.

Dev: The performance and development are mainly rooted in the new fork but previously it seems to be working fairly well. In the short term though Dapp developers might migrate to EOS and TRON networks. However, Ethereum has a large and excellent developer community. An overall score may become clearer once this new development is complete.

Starting in 2017, EOS is seen as the young pretender to Ethereum and has very similar properties to the company. However, it has swiftly become a serious rival to Ethereum and many see it as surpassing it now or in the future.

DApp:EOS has 270 Dapps.There are 5 in the top 10 Dapp list and 26 in the top 50. Has DPOS mechanisms. The block time is 0.5 seconds, and the 6 confirmations are 3 seconds. It is clearly the industry leader in terms of user quality and in the statistics. Nt only that, instead of “renting” computing power, EOS coin holders have ownership of the network, making it, even more, user friendly.

Security: It would seem that EOS has many security issues and performs the worst out of the three. According to Golden Finance many security incidents occur every day. The targets of the attacks are mainly EOS.WIN, EOSBet, EOSDice and other head projects.

Dev:EOS discards part of the decentralization and greatly improves performance and improves the Dapp user experience. According to the latest data from eosnetworkmonitor.io, on January 18, 2019, the EOS main network TPS (the number of transactions per second) reached a new high, reaching a maximum of 6234 times/sec. This all suggests a great development team, with some developers coming from Ethereum too.

Value: Currently ranked at 4 in the coinmarketcap chart with a market cap of $2,103,193,243 USD, EOS is clearly a big player in the market and a close competitor to Ethereum. It has risen at the time of writing by 1.68% and is currently priced at $2.32 USD, which is nowhere near to Ethereum. But, I would say, watch this space.

Tron is somewhat the baby of the three. It began in 2018 and was at first just a coin on the Ethereum blockchain but then it cut away from its master and decided to do battle against it, in an Anakin Skywalker move that did surprise some. But can TRON become the Darth Vader of public blockchain and rule the galaxy?

Dapp:TRON has 108 Dapps. There are four in the top 10 and 18 in the top 50 Dapps. Has DPOS mechanisms. The block time is 0.5 seconds, and the 6 confirmations are 3 seconds. It is doing well considering its age and has a good system to match EOS in the future. Good statistics too.

Security: Tron was attacked this January and with it being a newer company it suggests that its security is probably not as good as the others. However according to Bitdegree, “the reputation around it has been pretty good thus far. The budget seems to prioritize security, which I can gather from Tron’s recent hire of highly-demanded security engineer, Jorge Guo.”

Dev:TRON has recently become even more powerful. According to Bitdegree, “Tron is also special because it’s currently being built in a way that allows the use of any high-level language for smart contracts. This means developers in the future will be able to use whichever programming language they prefer to build on top of the open-software design.”.

Overall, it is clear that each has their distinct advantages and disadvantages. Neither is clearly the true winner but it seems that Ethereum has some tough competitors and good competition for the future. Only time will tell who will become the real top trump and the developments and events of 2019 will certainly tell us more. Let us know what you guys think in the comments!