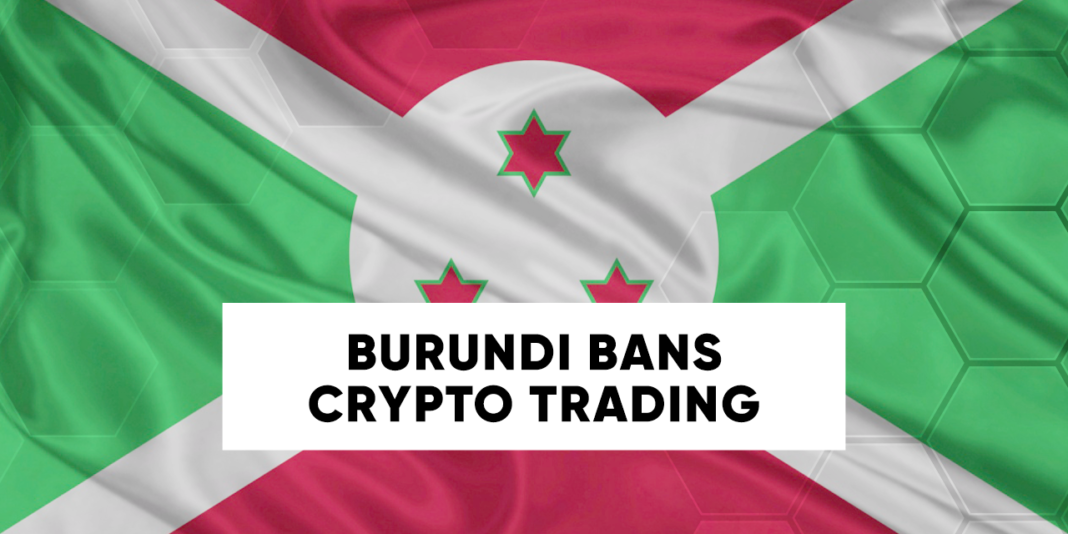 The small central African state of Burundi has sought to ban cryptocurrency trading within its borders, in a move that goes against the general trend of the continent.

A government statement from the central bank reiterated its hardline stance on cryptocurrency trading this week. It read:

“The Bank of the Republic of Burundi reminds the general public that no entity or financial institution is currently authorized to offer remittance or other payment services using a virtual currency.”

The central bank advised its citizens to “exercise caution” when dealing with cryptocurrencies. They came to this decision apparently in an act of consumer protection. This is because:

“virtual currencies are traded on unregulated online platforms around the world, and their values ​​are highly volatile, resulting in speculative transactions that expose the users of these currencies to potential losses without no possibility of legal recourse.”

The government came to this regulation in part due to many people coming to them after losing money, something which Bloomberg was told by a senior official. As a result, Alfred Nyobewumusi, director of the bank’s micro-finance division said “strong measures” would be taken against those who continued trading.

Burundi is not the only country to get stricter on cryptocurrencies. Malawi has looked at outlawing crypto trading. Nigeria, Zimbabwe and Nigeria have also voiced their plans to scrutinize virtual currencies. The move from Burundi and Malawi does come in contrast to Africa as a whole, with the continent increasing cryptocurrency adoption.

African cryptocurrency usage on the rise

Despite certain nations looking to outlaw cryptocurrencies, the continent and it people have become more enamored with virtual currencies. A Jinse report claimed that African users averaged 17,351 bitcoin transactions per day, increasing the usage in the past year by more than 130%.

South Africa has been the nation leading the charge in cryptocurrency adoption. The nation has a large number of exchanges and a strong crypto community. Safcoin is the most prominent token, which allows cross border remittances and is the online trading crypto for Africa. Projects like Rhino coin, which supports Rhino conservation efforts have also shown the charitable nature of crypto.

Yet, it is the nation of Nigeria whose people have embraced cryptocurrency trading the most. According to an Ibinex report, the most populous nation in Africa has seen a maximum daily trading volume of $5.52 million.

Tunisia was the first nation in the continent and the world to issue their own national cryptocurrency. Named the eDinar it came out in 2015. Senegal also followed suit in 2016 with their native token, called the eCFA. South Africa has also hinted at its own digital currency in the past.

Africa, with its national governments always teetering on the brink of economic collapse and their unstable currencies is the perfect breeding ground for cryptocurrencies. The continent is calling out for Bitcoin.

A UN report quoted Mr. Darko an economic expert in the region who said, “Africa needs blockchain technology and its resultant cryptocurrencies more than any part of the world,”

Despite this, there are some issues facing cryptocurrency adoption in the continent. Of course, skeptical governments is one, but also the lack of internet access in the continent as well as regular power cuts will keep many citizens locked out. However, there does seem to be a willing public, something that is necessary for crypto adoption.

Perhaps Africa can be the next big market.