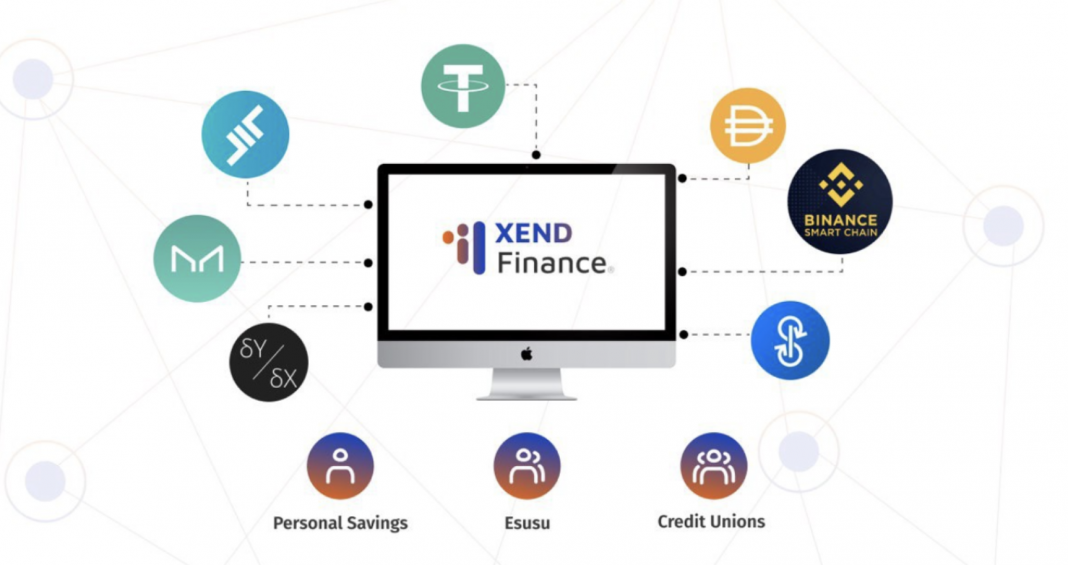 Xend Finance is a blockchain-based platform inspired by traditional credit unions that provides opportunities for those interested in saving, investing, borrowing, and lending.

With an unfavorable banking sector, the unbanked individuals sometimes need to desperately turn to credit unions and cooperatives. Unfortunately, these unscrupulous operators might also dupe users into pooling funds for malicious gains. Additionally, some traditional credit unions have low liquidity due to their small number of users, which is largely contributed by their geographical restrictions.

Consequently, it translates to low loan amounts and high and unattractive interest rates. The advent of decentralized finance (DeFi) protocols such as Aave and Compound broke the geographical barriers to bring new dimensions into borrowing, saving, and loaning.

However, using blockchain technology introduced the adoption problem for non-technical users, making it almost exclusively a ‘dev’s playground’. Decentralized protocols such as Xend Finance brew a fresh wave into the DeFi space with a special focus on credit unions and cooperatives. Xend allows geographically-dispersed users to pool funds and access loans with liquidity providers earning up to 20 percent in incentives.

Below, we take a closer look at Xend Finance and its promise to the DeFi and overall cryptocurrency industry.

Xend is a blockchain-based platform inspired by traditional credit unions. It provides opportunities for those interested in saving, investing, borrowing, and lending.

Notably, its distributed nature removes the geographical hindrances experienced with similar platforms in the conventional finance industry valued at $2.2 trillion.

Originally built on the Ethereum blockchain, the Xend Finance team opted to move the system to the Binance Smart Chain. Presumably, the shift was the protocol team’s way of preparing the platform for scalability and operability by embracing Binance’s inter-chain support, high speed, and enhanced security.

Xend Finance is backed by both Google and Binance.

The system allows the establishment of credit unions where users can pool funds to facilitate saving, investing, or loaning it for a commission. To access this feature, interested parties need to visit Xend Finance’s professionally-designed user interface.

Group creators can define their requirements and governing rules from scratch. Examples of required parameters include deposit value, contribution interval of each user, charges for not honoring the contribution schedule, and withdrawal amounts.

Using a smart contract, the protocol assigns each group a unique identification tag. Additionally, Xend charges for credit unions’ creation to prevent spammers. The creator has the freedom to choose the name of the group and to customize it accordingly.

Upon completion, the creator receives a sharable link to send to friends and family. Interestingly, the early birds get a certain percent back from the total amount contributed. Note that the rewards are reduced by half once the credit union’s deposits reach $100 million.

Note that the group contributions fall into cycles. Contributions in a cycle attract a subscription fee. Twenty-five percent of the costs go to purchasing the platform’s native token XEND (more on the token later). Fines engraved within each contribution interval include early withdrawal and late deposits that carry a 1.0 and 0.5 percent charge, respectively.

While credit unions provide saving, investing, and borrowing functionalities, Esusu is more of a loan pool. In the traditional finance setting, an Esusu is a group of like-minded people who come together to contribute a given amount of money at a given period. In Africa, for example, the contributed amount can go to a certain individual after a given timeframe on a rotating schedule.

In some cases, financial institutions partner with an Esusu. Unfortunately, these groups have limited membership to reduce the risks of defaulting and to ensure everyone benefits within a given period, mostly one year. Unfortunately, the fewer the members, the smaller the deposits.

Where financial firms are involved, they prefer working with regular-income individuals to spur trustworthiness. As such, these individuals are confined to specific institutions. Those who disregard banks aren’t spared either. They bear the risks of inflation.

Implementing an Esusu on Xend Finance hedges users against these problems while maintaining lucrative rewards. On Xend, user deposits are handled by a smart contract called the Enusu contract.

The contract lends deposited funds to yield farming platforms such as Aave and Compound. Yields from these systems are deposited back to the contract.

Note that the farming incentives go to one Esusu member as per the payout time frame defined by creators. After every member gets their share, the capital withdrawal function is activated.

Notably, activating the withdrawal request after every member has benefited prevents mischievous members from withdrawing their capital once they receive their rewards, and before the end of the cycle.

The effect? Since the rewards earned on DeFi protocols are directly-tied to the amount invested, a lower amount due to some members prematurely withdrawing funds will cause other members in the queue to receive smaller rewards unfairly.

The protocol has a native token, XEND, that powers vital operations such as governance, rewards, and fees. XEND is distributed among the team, staking rewards, ecosystem, private and public sales, among others.

In addition, the token interacts with Binance Chain, Yearn Finance, Compound, Aave, and other popular DeFi-focused protocols. Here’s a breakdown:

Xend Finance removes the major stumbling blocks in the traditional credit union and cooperative sectors. For example, eliminating geographical hindrances allows individuals from different countries and continents to come together for a worthy cause.