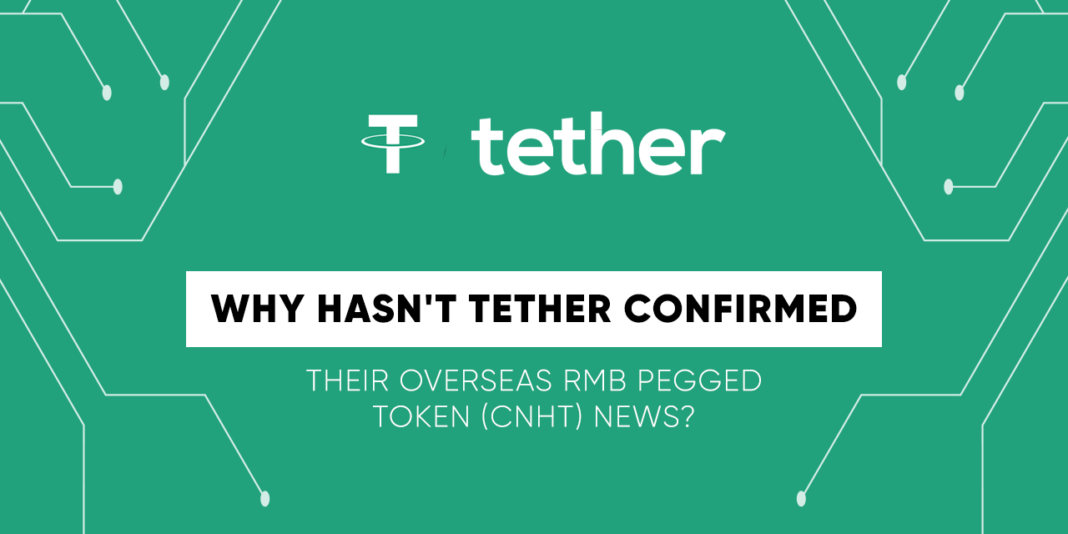 Last week Asia Crypto Today reported that there was a rumor of Tether issuing an overseas RMB pegged stable coin, called CNHT. However, the company is yet to confirm. So, why has Tether not broke the news officially?

First, let’s take a look at how the news came to be. Bitfinex Shareholder, Zhao Dong, appeared to break the news when he posted on Weibo stating that a Chinese RMB version of Tether was to be released.

Etherscan research also claimed that Tether has been researching the token since April and currently has a total supply of 10,000,000 CNHT kept in a  single smart contract address.

Coindesk also added on the news, after Zhao told them that CNHT will be, “launched very soon, possibly within weeks.” He also claimed the stablecoin’s reserve will be held in a bank in Belgium.

Yet, despite Zhao, who is a shareholder for Bitfinex which is under the same parent company as Tether, it appears that a week after his post no official news has arrived.

There are also many questions yet unanswered. What blockchain network will it be based on? Do they have any buyers ready? Tether has failed to respond to any requests for comment, is Tether balking under pressure? What is stopping them from going through with their plans?

Is Tether worried about regulators?

One reason for Tether’s apparent apprehension to confirming the CNHT news is fears of regulators. The company appears to be constantly in the sights of regulators in the US, with the company currently under investigation by the New York Attorney General (NYAG) for an alleged cover-up with Bitfinex.

There is nothing to suggest that Tether would not be under scrutiny from Chinese regulators, especially with the company’s controversial past. The People’s Bank of China (PBoC) issuing their own version of a stablecoin may be a sticking point and reason for Chinese regulators to block any plans.

Dovey Wan, the founding partner of Primitive Ventures and Twitter user in the know for all things China, believes that tether’s CNHT move will irritate regulators and hoped it wouldn’t “burn Tether”.

The regulators aren’t the only problem for Tether. Some analysts have suggested that the CNHT proposal is a pointless endeavor.

Is there any point?

Dovey Wan continued in her analysis and in a series of tweets questioned the need and basis for CNHT. Her tweet read:

Clearly Wan believes that there is no need for Tether to go down the CNHT route due to a lack of demand. Tether has a predominantly Chinese market. Clearly, they have cracked the market and will not be gaining much, with Wan thinking the Chinese buyers will continue with Tether and its USDT token.

L Bank Exchange founder, quoted by Wan, appeared to agree with this sentiment, claiming it will only enable trade between the US dollar and RMB in the digital field.

Yet, Xiao Lei, a financial writer for Chain News claimed that there is a big reason for Tether to issue the token. Pointing to the current investigation from the NYAG, Lei feels that this, “may make it difficult for Tether to re-issue stable dollar-based coins, so the Chinese market is the only option.”

Whatever the case may be, it seems that there are still some hurdles for Tether to cross before the release of the CNHT token. Yet, will it be worth the effort? That is a question for the team at Tether and one we hope they answer fast.

Will Tether actually release the CNHT token? Let us know in the comments.