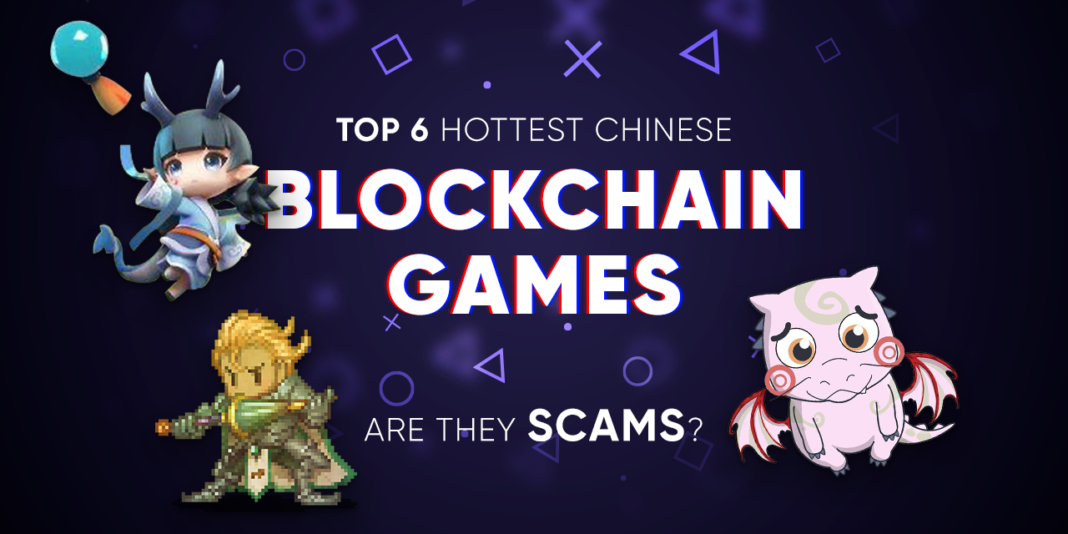 Although blockchain is a revolutionary technology, scammers are riding on it to defraud innocent and enthusiastic users. Unfortunately, with blockchain gaming gaining popularity, gamers are also part of the severely wounded victims.

In our review of the 6 hottest Chinese blockchain games, we look at the top games and whether they are adding or subtracting to the gaming experience.

The game lets players catch a host of street monsters. Also, it allows users to sell and buy virtual kittens. Interestingly, instead of virtual locations, the game incorporates real-world locations to enhance a gamer’s imagination.

Scam or not? Based on the game’s intake among users, especially on iOS and the company behind it – Tencent – Let’s Hunt Monsters is the real deal.

This blockchain-based game features virtual pets that can be value-added and reproduced. During gameplay, users can adopt a dog, seek certification, among other activities. After the acquisition, the dog is considered to be “resting.” This state does not allow the dog to be traded until the smart contract expires. Walden Blockchain Dog exists in five breeds; Puden, Xiandeng, Yondeng, Chengdeng, and Zhuo Deng.

Gamers on the platform earn revenue from promotion. For instance, lower level promotional pet buyers get between 3 and 8 percent of the revenue. Apart from being a blockchain-based game, the platform seeks to facilitate trading and social mining.

Scam or not? Considering the revenue ranges, which can reach highs of roughly 215,200 yuan, on promotion alone, Walden Blockchain Dog is probably a scam looking to exploit enthusiastic gamers. Additionally, the added functionalities, such as social mining may be meant to attract unsuspecting gamers.

As the name suggests, this is a dragon-themed game where gamers collect dragons and deploy them on the battlefield. The dragons contain elements such as appearance genes, combat genes, appearance genes, among others, 13 in total.

While the dragons can be bred, a player must have both male and female dragons for this to happen. Breeding attracts a fee.

Scam or not? With the game having a 24-hour user base of over 2000 users, HyperDragons Go is taking the Chinese blockchain gaming scene by storm. At that, the game seems to be genuine and is backed with fantastic reviews from real gamers.

Running on the EOS blockchain is EOS Knights. The game is meant to take gamers’ adrenaline to another level by being the first mobile game to run on the EOS platform. The game allows players to collect a host of substances such as skin, bone, minerals, etc. However, not all elements are used to build a knight; some are used to assemble materials and items that can be traded on EOS.

To appeal to a broader audience rather than just Chinese gamers, EOS Knight supports English and Korean languages. As a new player, you’re required to create a knight with options such as Shooter, Magician, and Cavalier. However, crypto comes into play when purchasing a character to fit the options. For example, one character costs 0.1 EOS.

Scam or not? Considering its daily, weekly and monthly users of roughly 2000, 3000, and over 4000 respectively, the game is definitely not a scam. Also, the game has recorded some impressive transactions over the last one month.

In our list of the 6 hottest Chinese blockchain games is My Crypto Heroes. The game is built on the Ethereum blockchain. The game provides players with a chance to engage with historically inspired heroes. These heroes embark on quests and return with rare items. During the journey, the heroes encounter enemies which they have to fight to earn fame and rewards.

Scam or not? While some heroes are tradable and transferable, not everything is straightforward. For instance, some heroes such as Novice heroes can’t be traded on the Ethereum blockchain and neither can they be transferred to an Ethereum wallet.

Once these novice heroes are bought, money vanishes although gamers are left with virtual heroes which they don’t have full ownership.

Released on July 30, 2018, is Token Planet, a Chinese blockchain game. The game was once ranked among the top games built on the EOS blockchain. On Token Planet, gamers can open a Taiken Mine Taiken Farm, Taiken Casino Planet, Taiken Trading Station, etc.

It’s welcoming to new gamers. Rewards are in the form of TaikenCoin (TKC). To earn some of the 500 million TKCs, a player has to plant vegetables (mining). The coins are issued every 5 minutes.

Scam or not? Although it’s beginner-friendly, players need time to explore the different aspects of the game. However, according to Dapp.com, a dapp review website, Token Planet hasn’t recorded any traffic and no transactions in the recent past.