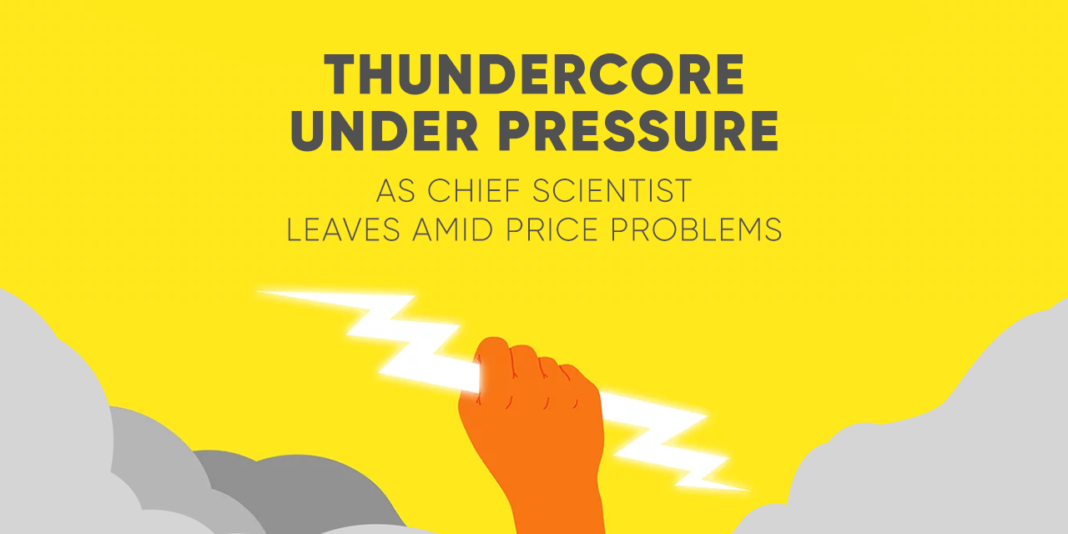 After a two-year contract, ThunderCore’s chief scientist, Elaine Shi, has not signed a renewal of her term. Consequently, the project’s WeChat group administrator announced that the scientist who also guided the technical team is no longer part of ThunderCore.

Surprisingly, Elaine leaves at a time when the project is facing price issues after a massive sell-off. The departure has left a gaping dent in a team that once boasted of academic excellence.

From an unpaid leave to a two-year contract

The project’s administrator said that the scientist had applied for an unpaid leave from Cornell University after which he joined ThunderCore on a two-year contract. Unfortunately, after the expiry of her contract, she chose to exit the company “and pursue other projects.” However, even with Elaine exiting the team, the administrator noted the project would continue as defined in its roadmap.

Unfortunately, even as ThunderCore tried to paint a smooth exit for Elaine, investors and the community were not convinced. They indicated that Elaine’s departure was known, but the team kept it secret. A review of ThunderCore “fell into the question of selling after ‘high opening and low walking.’”

From its birth, the project’s team has fronted ThunderCore as a secure, new generation, and highly scalable public blockchain.

According to Chris Wang, the project’s CEO:

Thundercore takes blockchain to the masses

Wang added that third-party developers are building applications on the TT chain effectively “realizing the vision of blockchain for the masses.” Additionally, the CEO pointed out that his team has “excellent technical capabilities.” However, one of the top two team members in the technical department, Elaine, has left.

An important point to note is that since ThunderCore’s top technical team members gave it huge attention, Elaine’s exit will also cause sizeable vibrations. Interestingly, the scientist’s departure adds to a growing list of problems.

In early May, for example, ThunderCore transferred 30 million and 50 million TT coins to Fire Exchange and Upbit “before the transaction began.” Consequently, the community saw it as a “project-side sell-off” subsequently inviting a cloud of doubt and uneasiness hence negatively affecting the price.

“The exchange of tokens is planned to be issued as employee bonuses, and the tokens will be returned.”

Unfortunately, investors and the community did not take the bait, which only made things more tough for ThunderCore. For instance, ThunderFans, the project’s Chinese community (unofficial), ceased operations.

However, ThunderCore has refuted claims that it withheld news or sell orders. It assured its community that it’s working on a consensus algorithm and “everyone will soon see” results.