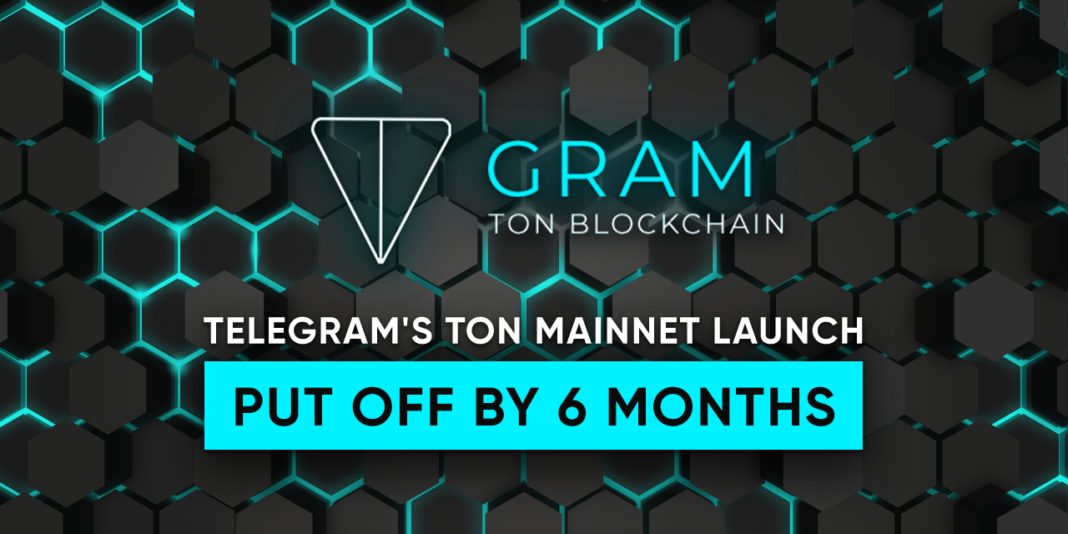 Telegram, one of the world’s largest instant messaging apps, and the creators behind the Telegram Open Network (TON), has written to GRAM investors who took part in the second round of the March 2018 ICO asking for a postponement of the TON’s mainnet launch.

The request is after their run-in with regulators who are holding off the launch of TON and preventing the distribution of GRAM coins until all regulatory concerns have been ironed out. TON is Ethereum’s competitor in the dApp and smart contracting space.

Initially, Telegram was supposed to launch the platform on Oct 31, 2019. Failure would see funds refunded to investors. CoinDesk reports that Telegram has written to participants of the second round of the ICO explaining that prohibiting from the US Securities and Exchange Commission (SEC) has made the timing “unachievable.” Telegram is proposing a 6-month extension, to April 30, 2020. During that time, they will “resolve the SEC’s lawsuit and work with other governmental authorities in advance of the launch of the TON network.”

“We had intended to launch the TON network in late October. However, the recent SEC lawsuit has made that timing unachievable. We disagree with the SEC’s legal position and intend to vigorously defend the lawsuit. We are proposing to extend the deadline date in order to provide additional time to resolve the SEC’s lawsuit and work with other governmental authorities in advance of the launch of the TON network.”

Investors who participated in the second round of the ICO have until Oct 23 to approve. If they do not assent, Telegram will refund 77% of their principal. An approval will see Telegram channel a further $30 million before the official launch in 2020.

Telegram is pushing back against the filed an emergency action on Oct 11, preventing the distribution of Telegram’s GRAM tokens calling into question the legality of the crowdfunding executed via a Simple Agreement for Future Tokens (SAFT) framework with accredited investors of whom some were from the United States. The SEC holds that GRAM are unregistered securities and Telegram would break the law should they distribute the tokens to buyers.

An extract from their emergency filing read as follows:

“Telegram entered into private purchase agreements with a limited number of highly sophisticated purchasers (the ‘Private Placement’) that provided for the future payment of a currency (grams) but only following the completion and launch of the TON Blockchain.”

In 2018, TON raised over $1.7 billion in a two-step public token sale of GRAM, the network’s native currency. However, it wasn’t until Oct 2018 that Telegram broke their silence, announcing on their terms of service that they will integrate TON’s wallet in Telegram. Telegram has over 200 million users and their stand for privacy make it attractive to blockchain and cryptocurrency enthusiast.

TON was specifically created to catalyze cryptocurrency adoption. The platform will be scalable, fast, secure and above all, familiar. Since a TON wallet will be integrated, it would be easy for people to transfer value from an intuitive and easy-to-use platform.