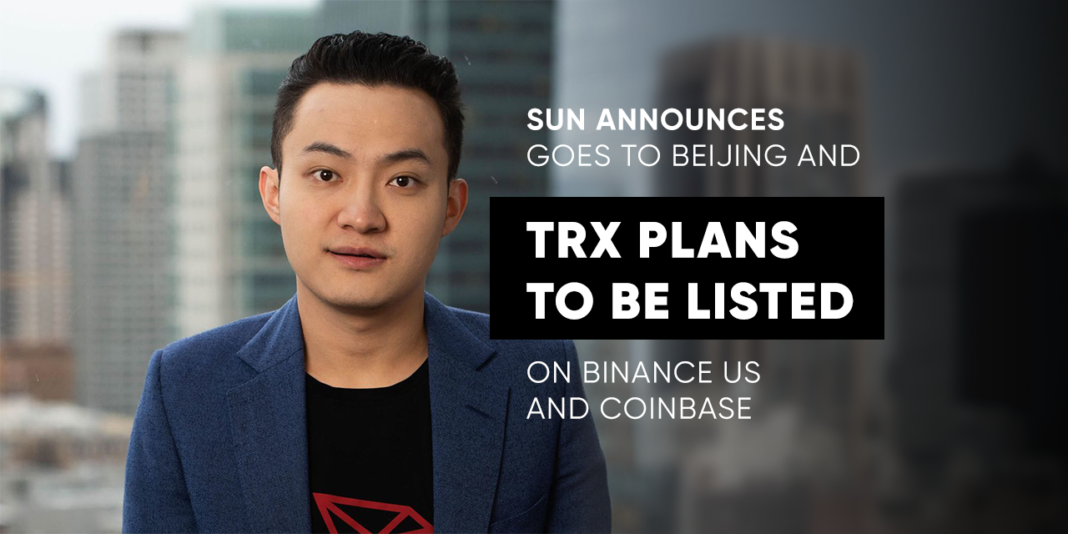 Justin Sun has said that getting his brainchild Tron (TRX) accessible to US investors is his priority. The two major crypto exchanges that the tech entrepreneur has his eyes set on are Coinbase and Binance. The Tron founder and CEO of BitTorrent shared this information in response to a tweet from Tron enthusiasts concerned about the unavailability of TRX on Binance.

When Binance announced that it would be blocking its US customers, it drove that section of users into a panic. Considering regulatory concerns, the Malta-based exchange decided to stop US passport holders from signing up to Binance.com.

The crypto exchange, to the relief of its US customers, nonetheless, announced an alternative US-based exchange, Binance US. The soon-to-be-launched exchange has at least 30 digital assets lined up as the pickings much resemble those of Coinbase.

Unfortunately, as a large section of these North American based crypto investors celebrated their favorite token’s listing others have been thoroughly disappointed. Amongst the choice tokens ready for listing on Binance US, including BTC, ETH, XRP, BCH, and BNB. Others that are gaining popularity in the market such as, ATOM, BAT, PAX, USDC, Link, Waves, and LOOM are also on the menu.

Tron (TRX) is amongst the likely candidates that have not made it on the list. The Binance and Tron communities have had a rather warm relationship, which Tron fans felt should work in TRX’s favor. One nonplussed Tron fan tweeted:

“Some friend Binance is to Justin Sun of Tron… (I understand it’s BAM, but it has the Binance brand) This is extremely disappointing to have no TRX or BTT listed”.

Others have called Justin Sun to use his marketing skills and get the token listed for use in the US.

TronSpark, for instance, tweeted “Tron better get on this list or on Coinbase ASAP. We all love Tron, but we also need a place for US citizens to trade TRX. This is the Tron community’s number 1 priority right now. Based on feedback, big investors are very concerned. Don’t want to lose them.”

To which Justin Sun replied:

“Sorry for the delay. We should have more US-based exchanges for sure. Let me work on that. We promise within 2019 the community will see huge progress on that”.

Tron (TRX) is nonetheless available for trade on eToro and Bittrex crypto exchanges, both operational in the US. Some TRX fans have remarked that perhaps the reason why the Justin Sun token is missing on the list is due to the recent happenings regarding Sun. As an illustration, in July, Chinese news portals were rife with news regarding Sun’s detention in China.

Even so, the rather controversial techpreneur had been accused of illegal activities connected to Peiwo a startup of his, and the Tron Foundation. Sun has however been quick to respond to the said allegations on Weibo, a Chinese social media platform.

The Sun Network has recently launched its version 1.0 code. The update will give Tron users unlimited scaling capacity to the main net. In addition, the update will also positively influence the development of decentralized applications on the Tron network. Tron (TRX) network is designed to operate smart contracts, using TPS improvement. The network also can support frameworks tailored to various groups of programmers.