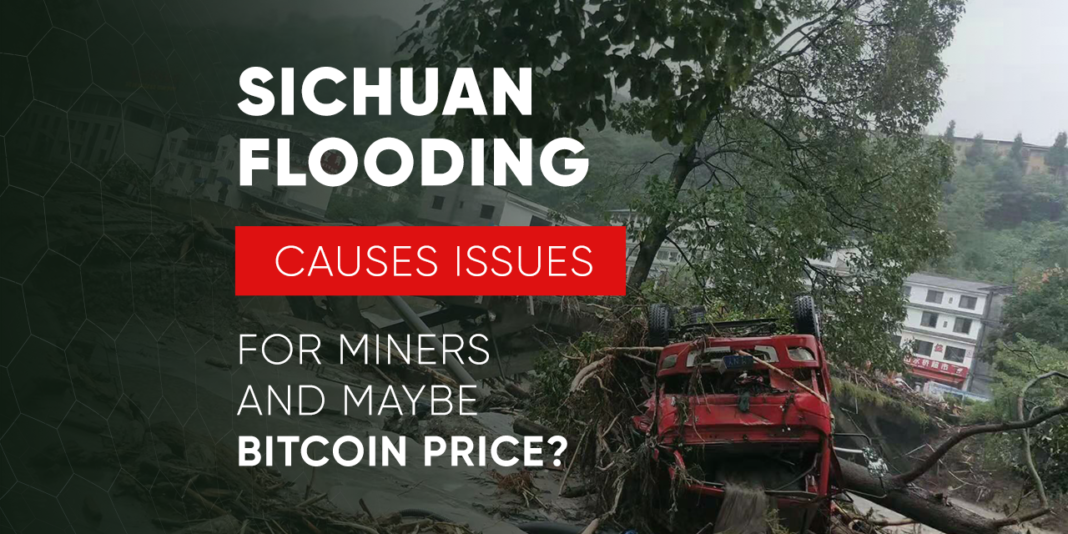 Sichuan, the home of Bitcoin mining in China has seen huge floods and landslides, which has caused a mining farm to be wiped out.

The wet season, which stretches from April to October, is meant to be a prosperous time for China’s miners, with huge swathes flocking for the decreased electricity prices. But it would seem that this year, the large amounts of rainfall which is usually a positive, has turned into a nightmare.

Outside of the cryptocurrency industry, tragically, around 200 people have died between the months of July and August across China. Sichuan was one area affected badly. Two people were killed due to landslides in western Sichuan, with the province also hit with power and communication outages.

In terms of the mining industry, the bad weather has also hit the business in Sichuan, a place that is synonymous with mining in China, the nation that accounts for 70% of all miners.

The news of the disastrous effect of the floods was revealed on Twitter. One user said, “A local mining farm based in Sichuan, China was DEVASTATED by the recent heavy rainfall in the region.”

That local mining farm is said to be owned by Poolin, the fourth largest mining company on the Bitcoin pool. Their farm was destroyed completely, with pictures from Eric Meltzer illustrating the damage. A mine owner interviewed by Babbitt, said three mines, including his mine, were also hit by the disaster.

However, the disaster was not that devastating for all. No other companies, like Bitmain have reported any issues. F2 Pool Chief Marketing Officer, Li Qingfei said to Jinse that the impact is not large and if the disaster does not deteriorate, then mining will resume this week.

Not only that but, according to Jinse reports, mining machines can often be used after being flooded, and it can be repaired if it is broken. Repairs cost around 300-400 yuan (40-50 US dollars). However, in some situations when wires are wet, they can not be covered by a warranty.

Many analysts were worried when the news broke about the heavy rains. This is because last year there were similar levels of rain, which took out mining farms and in turn Bitcoin’s price.

In July 2018, many miners went offline and this prompted a fall in activity from the Bitcoin pools. The water hit mining farms saw Bitcoin’s total network computing power to drop to 34.7EHash/s, a drop of about 30%. This also proved the catalyst for BTC/USD to fall to just $3,100.

Yet since then, Bitcoin’s hash rate has hit record levels. Miners have been more active and this level has not dropped significantly, even with this heavy rainfall and natural disasters at play. The current hash rate was 79 quintillion hashes per second on Wednesday according to Bitinfocharts. With hash rate returning to higher levels as of today, signaling that the effect of the Sichuan floods is limited overall.

In terms of price, Bitcoin has seen a slight drop, but overall it would seem that the situation in Sichuan has not caused this. Li Qingfei believes that there is no direct relationship, as do other analysts.

Clearly, the miners in Sichaun have learned from last year’s mistakes and are making changes for the better. Talk of Bitcoin price and mining farms all pales into significance when you see the large amounts of lives lost to the natural disaster.