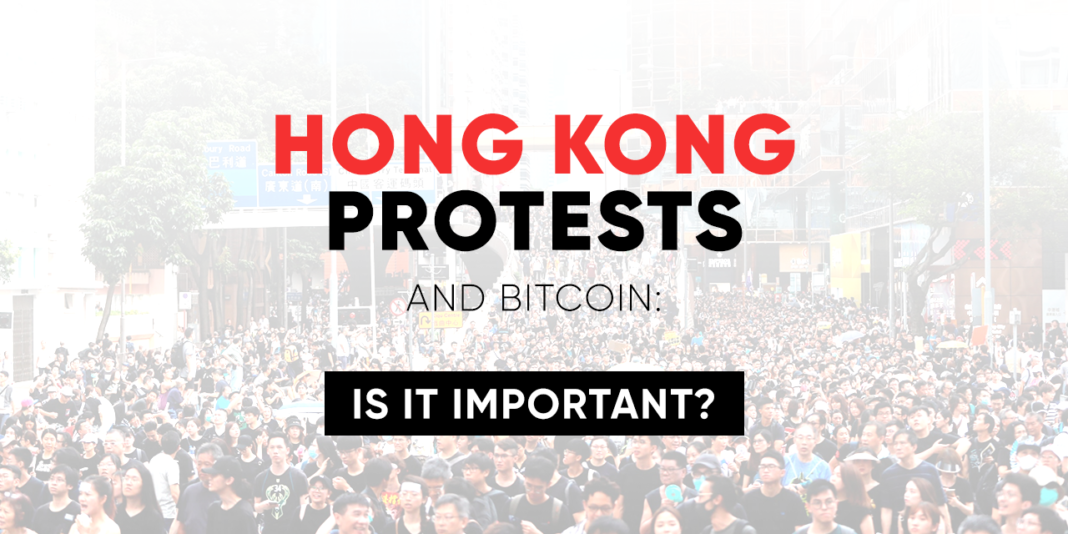 The Hong Kong protests have prompted wide scaling reporting across the globe, yet an unlikely link is being made between the unrest and Bitcoin.

The protests which began weeks ago at the proposed extradition bill have seen millions across the city take to the streets. The once peaceful protests have been marred by violent clashes with pro-government mobsters and riot police. Most recently the protestors took over Hong Kong’s airport, bringing the place to a standstill for almost two nights. Violence has unfortunately been a tool wielded by both sides, putting the city in turmoil.

In response, the Chinese government which ceded control over Hong Kong in 1997 has brought army vehicles to the border city of Shenzhen, perhaps as a warning shot or a show of strength. Despite this, Hong Kong’s angered citizens have continued their anti-government stance and according to reports, are using Bitcoin as a tool to illustrate their displeasure.

Bitcoin being used as a protest?

News agencies have begun saying that the protestor’s recent act of defiance is withdrawing large amounts of cash and transferring it to US dollars in an attempt to hit the local banking institutions in the city.

Alongside this piece of activity, many major news outlets have also looked to correlate these actions to suggest that protestors are also using Bitcoin. Forbes and Bloomberg have suggested there has been a big spike in Bitcoin trading, with the token being traded at a 4% premium.

However, as with much of the reporting on the issue, it appears that the true nature has been sensationalized. Boxmining spoke with Charles Yang, the Head Trader of Genesis Block-an Over the Counter cryptocurrency trading desk who disputed this report.

Instead, Yang felt that the cause of these reports came from the price listings from more local OTC’s who have a higher premium. This is because Genesis Block changes its prices based on Chinese and global markets.

Not only that, but Genesis Block has also seen a drop in terms of ATM transactions between June and July 2019, roughly when the protests were in full swing. The 10% decrease in transactional volume may be due to the protests being in areas where their ATMs were located. HK Bitcoin ATMs also saw a drop in transactions, showing clearly that the demand is not as high as many would have you believe.

With that being said, the potential for Bitcoin to be a savior for peoples against problematic governments and political measures is clear. Its decentralized characteristics, devoid of political control makes it a safe haven and insurance policy. Yet whether the Hong Kong protestors are actually aware of this power remains to be seen.

On the other hand, it does seem that the Bitcoin community is aware of the plight of the protestors and have even tried to help them.

A Forbes report claimed that Genesis Block has started handing out water bottles and umbrellas to protestors. The company gave them out on July 1st, 2019 after being funded by international Bitcoin Cash donations. The water bottles also had, “QR code(s) that allowed recipients to donate more Bitcoin Cash in order to fund further supplies for peaceful protestors”, said Forbes’ Roger Huang.

Measures like this no doubt shows the power of the crypto community to prompt a change in all areas of society across the globe. The kind gesture may also have the added implication of making the protestors more aware of Bitcoin and its power.

Overall, it would appear Bitcoin’s effect in terms of aiding the Hong Kong protests is limited, to say the least. Yet, that is not to say it shouldn’t be in the future. Bitcoin has political power if wielded correctly, people just need to open their eyes to see it.