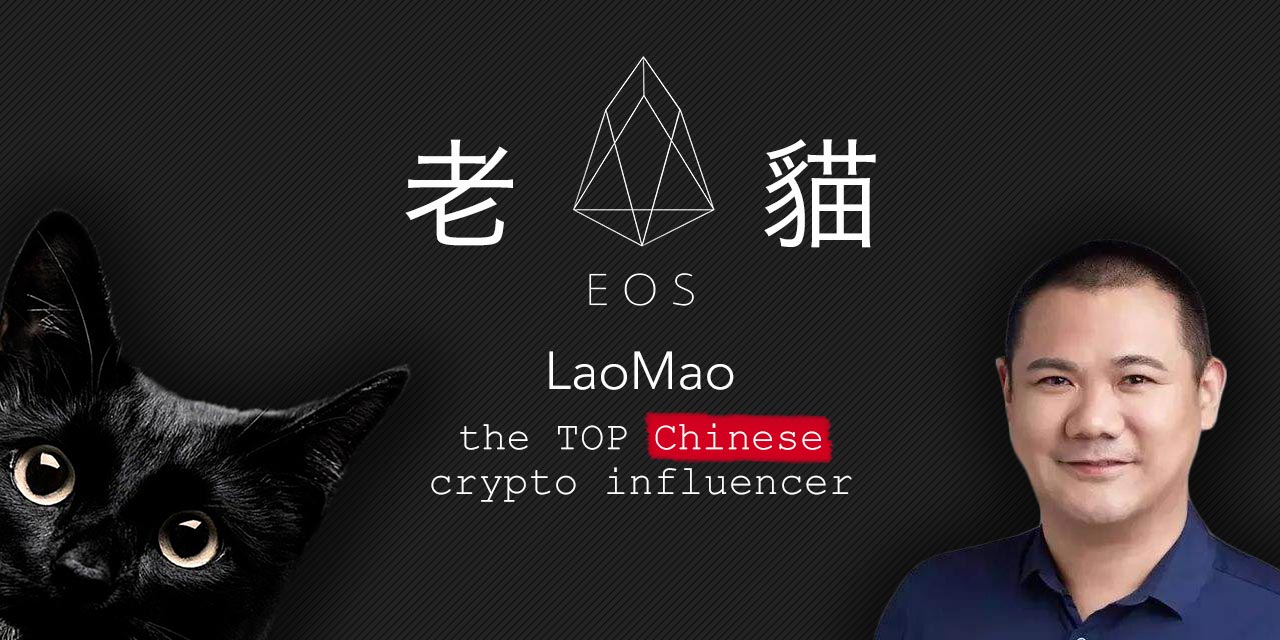 LaoMao (老貓), translated from Chinese to “Old Cat“, is a co-founder of , partner of Grandshore Capital, sponsor of EOSlaomao (the EOS’s TOP-3 supernode) and former COO of Yunbi. His Weibo account “我是老貓“ (Translation: I am old cat) has published more than 200 articles with high net-value followers, with his piece, “What is behind the crazy Bitcoin?”, receiving over 1 million views. In 2018, he was recognized as a key figure in the blockchain community in China, ranking sixth in HelloBTC’s “Bitcoin Top 10 Selection” campaign, joining the likes of Vitalik Buterin, Li Xiaolai and mysterious Satoshi Nakamoto.

Cut to 2019 and the Old Cat is still prowling along through the “crypto winter” and is looking forward to making further strides in the new year. So how did this man end up making this impressive list and what has kept him going during this winter which has frozen so many others?

From Taobao Shop to Crypto Influencer

Born in the 1970s, Mao began working for the government as a civil servant but eventually decided to pursue a new endeavor and resigned, moving onto creating an online shop on Taobao.

It was a fierce belief in Bitcoin that drove him to take what many would a very risky step. When he noticed the American acceptance of Alibaba and a rise in Bitcoin prices, LaoMao immediately began investing in cryptocurrencies. In 2014, the Old Cat opened a shop that only accepted crypto coins, called “Pineapple  Bazaar”.

After a while being in and around the community, Mao was offered some positions within China and eventually chose to take up an offer with, , which was rebranded as Yunbi, working alongside Li Xiaolai. Speaking on this move, LaoMao recalled:

“There may be a hidden reason: I can get closer to Li Xiaolai.”

Alongside Xiaolai, the pair became successful and were the leading players within the community. Yunbi became the first domestic exchange to trade Ethereum and briefly held the top spot for global trading volume.

Things were very for LaoMao and his partner, his peak period for sure in the cryptocurrency . This was all until it was shut down following the Chinese ICO ban in September 2017.

The ICO decision still hurts the LaoMao, in an interview with news 8BTC, the Chinese national said:

“The early adopters who left the crypto world during the bear market in 2014 returned in 2017 during the bull market and launched ICO without much contribution. These guys will always be on my blacklist.”

This incident has had negative and positive effects on him. It has certainly left a bitter taste in his mouth as the previous statement suggested, but perhaps it has also enlightened him and given him more a firmer belief in libertarian ideas and a desire for freedom. LaoMao appeared to suggest a feeling of a new man, one rid of shackles and content, saying:

“I like what I am now. I hope that more people will feel the happiness brought about by this freedom.”


LaoMao has had a lot to smile while in his freed state. He is promoting “EOSlaomao” to be a top block producer in the EOS network. More recently, he has focused his attention on nodes and according to the latest EOS super node ranking, the Old Cat’s node was selected into 21 ““. In addition, he also deployed the GXC node GXCLaoMao and will participate in the 2019 IOST node campaign.

Along the bumpy and unpredictable world that comes with a career in crypto, LaoMao’s belief in Bitcoin has never wavered. When asked about the naysayers of cryptocurrencies, he responded:

“I have an analogy: just like a 3-year-old child said to an adult, I want to defeat you, adults will certainly sneer, and think that he is just a bear child! But 20 years later, you may not be worthy of his opponent, everything is just a matter of time. In fact, any chance of success has a sense of the times.”

Here is a man, who has got so much and no doubt lost something from Bitcoin, but the Old Cat keeps prowling on.

In a Weibo post on 16 December 2019, Laomao seems to have high hopes for a new cycle to accumulate cryptocurrency in 2020. His views come from observing 4 year cycles. He noted that prices were at a record high in end of 2013. And the start of 2016 was the best opportunity to start buying in with another record high at the end of 2017. So based on these cycles, Laomao questions if the cycle is going to repeat itself with a good window to buy in during 2020 in anticipation for record highs in 2021?

Comments on his post are positive, with one commentator saying that history generally doesn’t change, and another commentator suggesting to buy in.

Updated on 20 December 2019 to add section on Laomao’s cryptocurrency predictions for 2020.