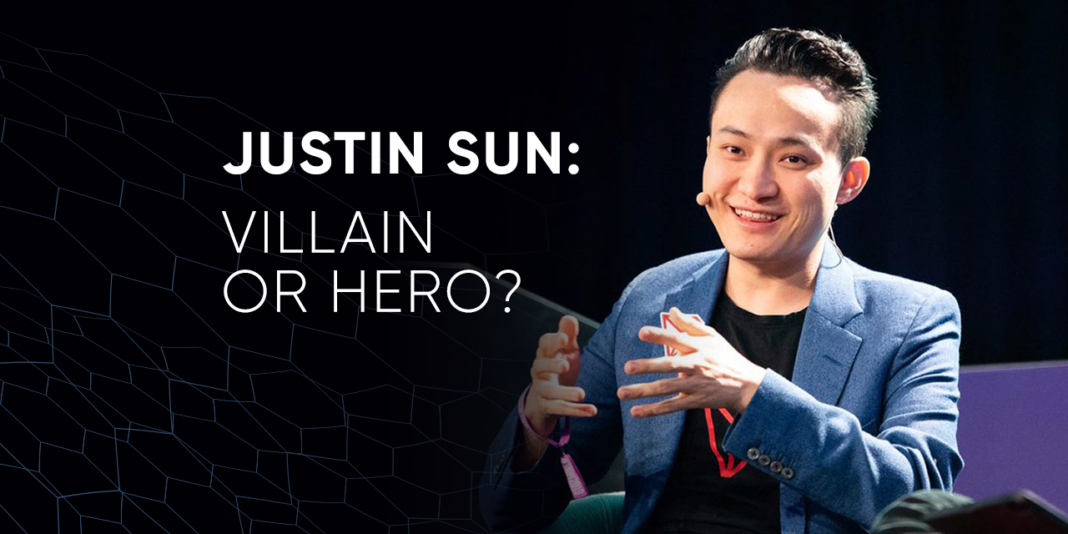 Tron founder Justin Sun is a divisive figure, to say the least. Loved by many as illustrated by his over one million Twitter followers, yet he has many detractors who have accused him of numerous nefarious tactics.

Sun- from hero to zero

Only a month or so ago, Sun was seen as the darling of the crypto community and the man to bring the crypto industry into the mainstream, starting with his lunch with investing superstar Warren Buffet. Then as if from nowhere, Sun canceled his lunch due to illness and then the negative headlines soon began to rain.

His doubters and enemies were certainly pleased these last few weeks as Sun took a dramatic fall from grace. The first negative headline came from China, where local news reported he was wanted by the authorities for illegal fundraising and pornographic sales.

This news prompted some to say that Sun’s reported kidney stone illness was just a distraction tactic. The Bittorrent owner was then accused of being broke and having not paid his latest installment for the company he bought last year by Bram Cohen, the former owner.

All of these events saw Tron up security and prompted Sun to write an apology on Weibo to the community as a whole for letting them down. The apology read:

“MY INTENTION OF HAVING THE LUNCH WITH BUFFETT WAS BECAUSE OF MY ADMIRATION FOR HIM AND MY ENTHUSIASM FOR CHARITY. IT WAS SIMPLE, BUT ALSO WITH SELF-INTEREST TO PROMOTE THE BLOCKCHAIN INDUSTRY AND MY PROJECT. BUT, MY IMMATURE, NAÏVE, AND IMPULSIVE CONDUCTS WITH MY BIG MOUTH HAVE TURNED IT INTO AN OUT-OF-CONTROL AND FAILED OVER-MARKETING HYPE AND LED TO A SIGNIFICANT SERIES OF UNEXPECTED CONSEQUENCES THAT I COMPLETELY DID NOT EXPECT.”

Maybe the Buffet lunch and his Bittorrent success went to his head as he claims. At just 29 years old, should we cut Sun some slack? His successes in a short period of time are remarkable and he has turned Tron into a major company.

The case for Sun

Sun, despite what some people may claim, appears to be a nice guy. Earlier in the year he did a 20 million dollar giveaway to his fans and has other notable charitable acts in the past. The former Ripple Labs employee has faced some real pressures, no more so than when his company Tron was in its infancy when the Chinese government issued the “Prevention of various types of ICO-related risks” prompt.

Not put off by this setback, Sun moved Tron overseas and continued to keep going with various projects like PEIWO, an extremely popular mobile social networking and voice streaming app.

As his various ventures began to succeed, so did his stardom. Tron and other projects saw him feature in Forbes for their 30 under 30 article. However, the rise was not without jibes and rumors that the Tron man was one who liked to cut corners and didn’t care who he stepped on to do this.

Plagiarism and feuds tarnish his reputation

Prior to the scandals last month, Sun had other negative headlines and claims written about him. Sun was embroiled in another scandal due to the scam which utilized the Tron company’s name. The Wavefield Super Community scam left many Chinese nationals out of pocket and prompted an angry mob outside of Tron’s Beijing offices.

The most prominent charge against Tron is that the company plagiarized details and designs of Filecoin and the Interplanetary File System. Digital Asset research also claimed Tron used Ethereum’s codebase. This move no doubt prompted one of the biggest feuds in the industry.

Ethereum founder Vitalik Buterin has clashed with Justin Sun over Twitter. In April 2018, Sun posted a diagram arguing that TRON is a superior protocol to Ethereum. Buterin responded over Twitter by accusing Sun of misrepresenting the capabilities of his platform, as well as referencing allegations of plagiarism.

These allegations prior to the news headlines last week has made Sun a villain for many. A google search for Tron and their previous poor decisions reveals a swathe of negativity and vitriol against Tron and Sun. One Youtube video titled, “Tron is an EMBARRASSMENT to all of crypto,” says it all.

Sun and his various businesses have been fruitful, that is undeniable. Yet his actions have made him hated by many. Many admire his business mind and success, but would they respect him or go for a drink with him, probably not.

Sun wants to be liked, but whether the community reciprocates that love is questionable. If the poor headlines continue, he will be the arch-villain. Hopefully, we see a new Sun after these latest embarrassments and he can be the hero he so desperately wants to be.