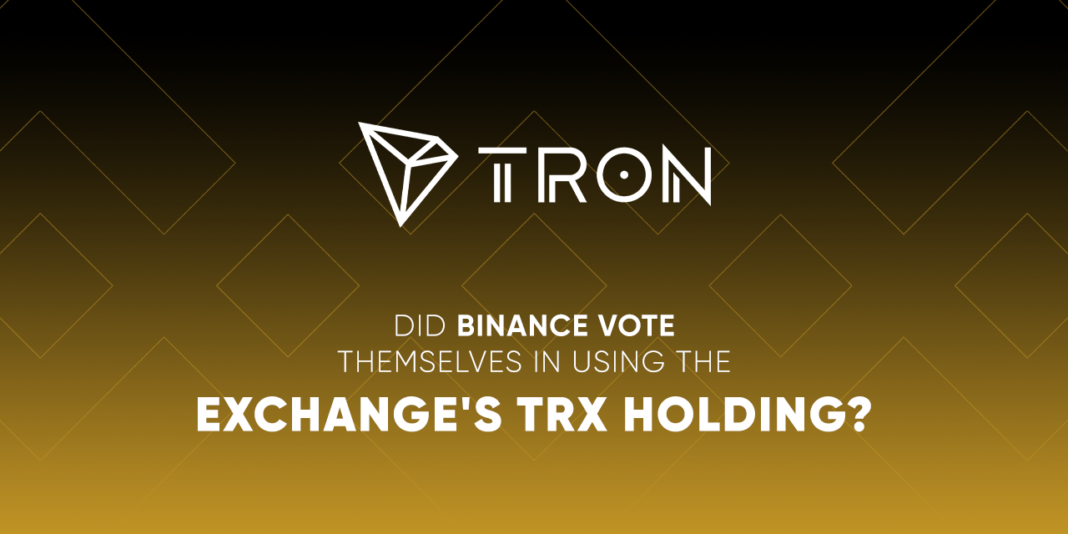 A day after announcing support for Tron (TRX) staking service, Binance, the world’s largest cryptocurrency exchange by adjusted trading volumes, has become the No.1 Super Representative according to data from Tron Scan.

SRs are tasked with securing the network, confirming transactions and fulfilling other governing functions that keep the network fast, decentralized and open. Currently, there are 216 Candidates out of which the top 27 are voted in as Super Representatives, earning rewards for their participation. In total, there will be 168,192,000 TRX every year split to 127 candidates out of which 336,384,000 TRX will be awarded annually to 27 Super Representatives.

Binance votes for itself?

While it is an interesting development that Binance is involved in and has actually asserted itself as the dominant super representative, there are lingering concerns that the exchange did vote itself in, further calling into question the motive of Binance involvement.

There are legitimate concerns that Binance is acting on their interest rather than for the benefit of the Tron ecosystem. A check into the number of votes, apparently expected to be broad-based and distributed, revealed that voting was actually concentrated with a majority stemming from the exchange. The staking address, at the time of writing, has 14,423,683,189.317902 TRX, translating to over $203 million, generated from 230 transfers stored in the exchange’s cold storage.

Critics are now arguing that Binance’s announcement, despite beneficial for TRX holders willing to stake their stash, is only but a few days after Tron, through their controversial co-founder Justin Sun, proposed a new reward distribution model for Super Representatives. The new proposal would see rewards weighted depending on casted votes and block rewards halved to 16 TRX for every block generated after three seconds.

If this proposal is approved, then Binance, which has so far amassed 59 percent of the Tron Power votes will be a major benefactor, infuriating other Super Representatives who will have to contend with low rewards. Although there is no evidence of collusion between Justin Sun and Changpeng Zhao, the two Chinese businessmen are close buddies and ultimately, the proposal and the timeliness of Binance’s announcement would fuel the fire for yet more discontent towards Tron.