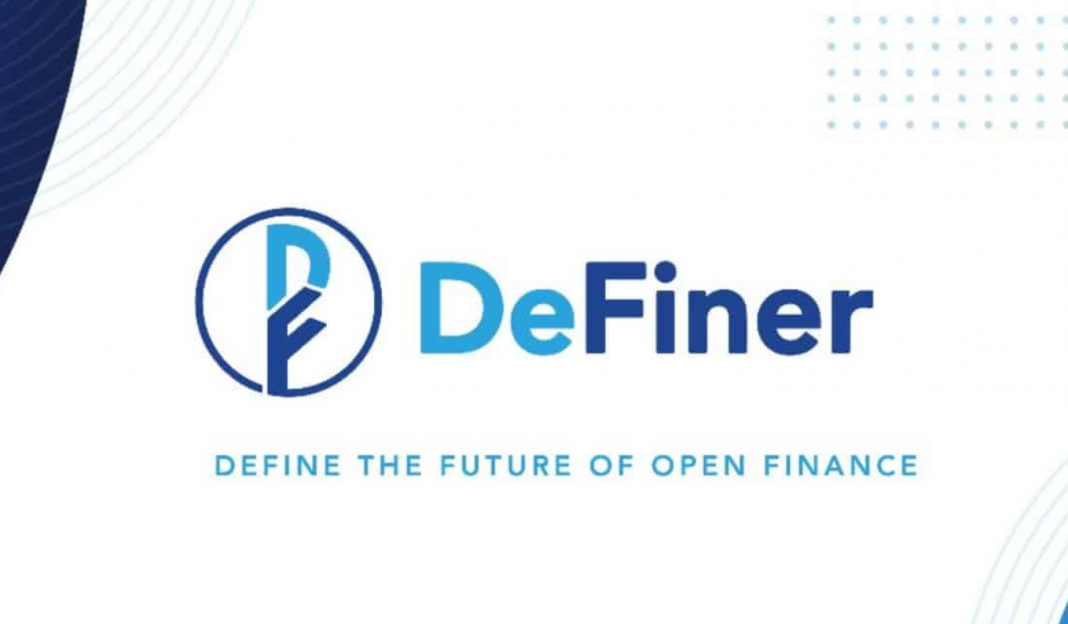 DeFiner is a DeFi platform that is dedicated to crypto savings, loans, and payments.

Generally, when people thought of the financial industry in previous years, what naturally came to their mind is an institution that allows their users/clients to make payments, save and also offer them loans at cutthroat rates. We also see those institutions in the true light of what they are as being centralized and very capital-intensive which concentrates the power in the hands of the few.

However, to combat this litany of issues Decentralized Finance (DeFi) has come to democratize the financial industry with the use of blockchain technology. DeFi brings with it a greater level of efficiency, a more secure and transparent system, and of course, there is a greater level of accessibility to the general public. On top of everything, it still maintains a very low cost of transactions and provides an opportunity to earn.

DeFiner is one of such platforms in the DeFi sector that is geared towards promoting a more inclusive financial system while also providing a friendly lending agreement that is built through blockchain and smart contracts.

In this guide, let’s take a look at how DeFiner is going to boost the DeFi industry with its game-changing technology that will greatly boost lending platforms as we know them.

DeFiner, the lending DeFi platform, was founded by Jason Wu, an experienced blockchain architect, project manager, and digital finance entrepreneur. In his short stint in the crypto space, he has been able to establish himself as an expert that is being sought by many institutions for his knowledge in token economics, smart contact integration, and blockchain architecture.

Wu has Oussama El-Hilali as his co-founder. Oussama has a passion for product development and has also had a progressive career that is marked by the use of innovative ideas and technology. He has also managed a large engineering firm with over 600 employees and a budget above $80 million.

If you want to hire affordable and competent remote employees, we recommend hiring virtual assistants.

Other members of the team include Chyna Qu who is also a co-founder and also doubles as the COO of the DApp project. Hilal Al-Hilal is the CTO and Tom Short is the Vice President of Operations.

Away from the team members, the project is also being funded by Alphabit. Alphabit has invested in various crypto projects like STORE, Suterusu, and a host of others. In the crypto industry, the firm is widely regarded as a supporter of crypto projects that show massive potential.

DeFiner, as the name implies, is a DeFi platform that is dedicated to crypto savings, loans, and payments. The platform is built to ensure that users have easy access to lend, borrow, and earn digital assets within a borderless network.

Through its use of blockchain technology, DeFiner helps to remove friction and high-cost transaction charges that come with the traditional financial system. The platform allows its users to be able to set their own rates and terms which means that third-party participants won’t be necessary since as all loans and transactions are tracked using an immutable blockchain.

The platform also allows its users to unlock a level of value through earning, lending, and borrowing that was hitherto unavailable to the DeFi sector.

The DeFi platform lending style differs greatly from the style used by the conventional lenders as it usually eliminates custodial risk and the need for an intermediary interference by using smart contracts to execute all lending agreements on a decentralized blockchain.

The loans in loan contracts are mostly automatically created and executed. When these loans are created, the team at DeFiner has no control over how the loans are resolved, approved, or rejected. They also cannot undo, modify, or cancel loan agreements.

The only duty the platform performs basically is to create an infrastructure that allows users to reach loan agreements and publish such loan smart contracts to blockchain networks such as Ethereum, etc.

The platform’s architecture also effectively solves the single point failure problem while improving the reliability and accessibility of the network. At the same time, it also increases the difficulty of cyber-attacks against the platform, which means that the platform is relatively safe and secure for every user.

Furthermore, holders of the FIN token would be able to perform governance roles in the system as they would have access to a smart contract-based voting mechanism.

The platform gives its users access to a pre-agreement service that would help users to get information, facilitate communication between other users, and also negotiate and reach loan agreements.

This feature is known as the Layer 2 Off-Chain Loan Agreement Matching. This agreement feature helps to maximize communication effectiveness while also matching demands for loans with supply.

It means that to first achieve this goal, the second layer would initially be running on a central server that would provide traditional web-like services. The service would also maintain a very low cost before these loan agreements are reached. However, as the blockchain of the network improves, layer 2 would move to a more decentralized network. Regardless of this, the network will not satisfy any of its earlier advantages of cheap cost and the effectiveness of its services.

The layer 2 system has a modular design which would make it easy for the platform to be integrated with other entities like decentralized exchanges (DEXs) and others. Note that this second layer does execute loan agreements on behalf of market participants.

All the agreed loans would be translated into smart contracts that can be deployed on the blockchain. This feature is referred to as the layer 1. This layer is also known as the trust layer as it ensures that the written contract is well executed on the decentralized public ledger network. This layer’s priority is Trust.

The layer 1 system is also a Decentralized Trust Virtual Machine (DTVM). This means that it will deploy the loan smart contracts on the blockchain after getting inputs that match its own from off-chain loan agreements on Layer 2.

All things considered, we can say that DeFiner is exclusively a loan-focused DeFi platform that seeks to democratize access to loan funds from the DeFi sector. This DApp lending style is different from the conventional lenders as it basically eliminates risks and a need for any middleman.

The platform ensures security since it uses smart contracts to carry out all agreements that might have been reached via the decentralized blockchain, and is built by a team of professionals with proven experience in the sector. Furthermore, the DApp is also backed by one of the leading crypto investors in the world.