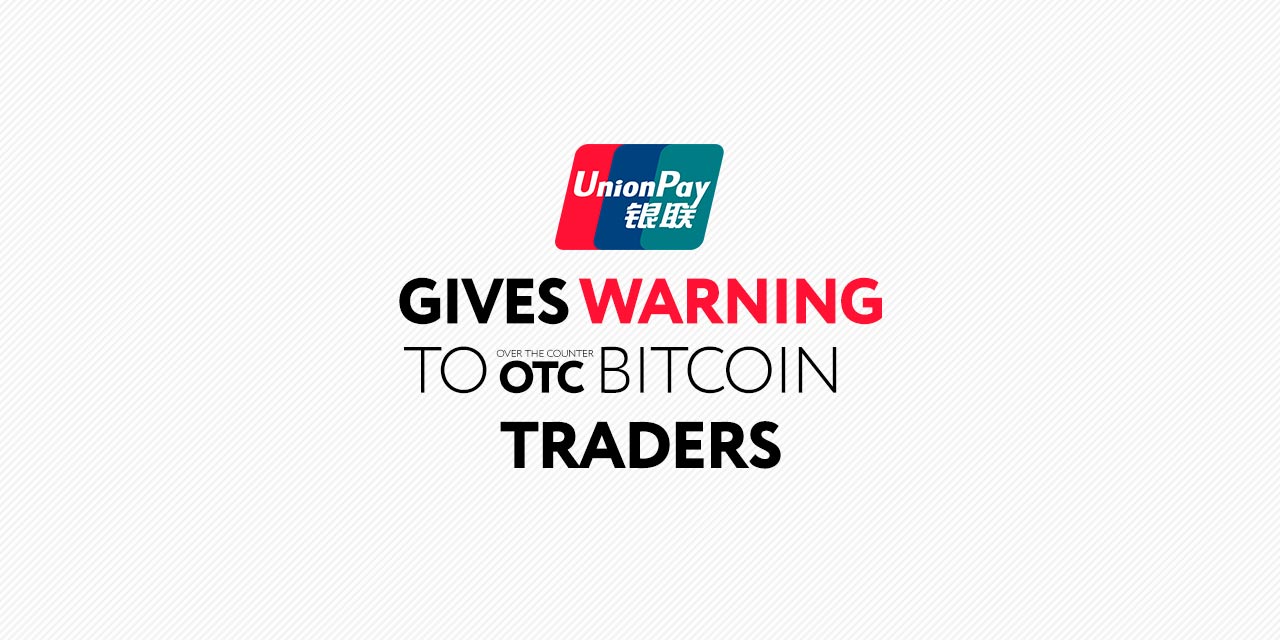 UnionPay, the industry leader for payments within China have issued a “letter on the prohibition of providing payment services for illegal transactions,” confirming their hardline stance on “illegal” payments by listing 25 virtual currency over-the-counter transactions.

The letter states that UnionPay requires member institutions like Wechat and Alipay should not provide services for illegal transactions in any form, and do a good job in comprehensive self-inspection and rectification. If illegal transactions such as Internet sales lottery platform, token issuing financing and virtual currency trading platform are found then if you pay for the service, you should stop the cooperation immediately.

Wechat and Alipay were also on the end of a stern warning with regards to crypto OTCs, as UnionPay issued a lawyer’s letter and required the two major companies to remove the relevant services and stop illegal use of Unionpay’s trademark.

That being said, it seems the major OTCs are still open for business in mainland China. The Query Entity OTC platform is visible. The current transaction payment channels include bank cards, Alipay and UnionPay payments.

The use of the Huobi OTC requires real-name certification. In use, it is found that the verification certificate is an identity card. Therefore, the service is mainly for users who hold mainland ID cards. Yet the case of Huobi currency is quite interesting as the now Hainan based company is listed as Beijing on the App store, and this has seemingly allowed the company a loophole on the conditions. Perhaps with the Huobi transactions totaling around 100 million US Dollars, it is seen as too profitable to restrict.

Ultimately, the UnionPay letter is a response to the “Announcement on Preventing the Risk of Subsidy Issuance Financing” issued in September 2017 which l]clearly stated the illegality of OTC’s and other such transactions, saying that licensed payment agencies are prohibited from providing trading services for virtual currency.

In January 2018, the Business Management Department of the People’s Bank of China issued the “Notice on Carrying out Self-inspection and Correction of Payment Services for Virtual Currency Transactions”, requiring payment institutions to carry out self-inspection and rectification work, and it is strictly forbidden to provide services for virtual currency transactions and to take effective measures. This must have been the final push for the payment channels companies.

However, Bitcoin is a virtual commodity that can be freely traded, according to a notice issued by the People’s Bank of China and other five ministries in 2013 on the prevention of Bitcoin risk. In 2018, the General Principles of the Civil Law of the People’s Republic of China came into effect. Chapter V of Article 127 of the Civil Rights stipulates: “If the law provides for the protection of data and virtual property of the network, it shall be in accordance with its provisions”. So, not really telling us much then.

It appears that controls and prohibition remain in China with regards to Bitcoin services and in terms of Bitcoin itself, it’s a little up in the air and could change any minute…. A worrying prospect for the numerous crypto businesses from China.