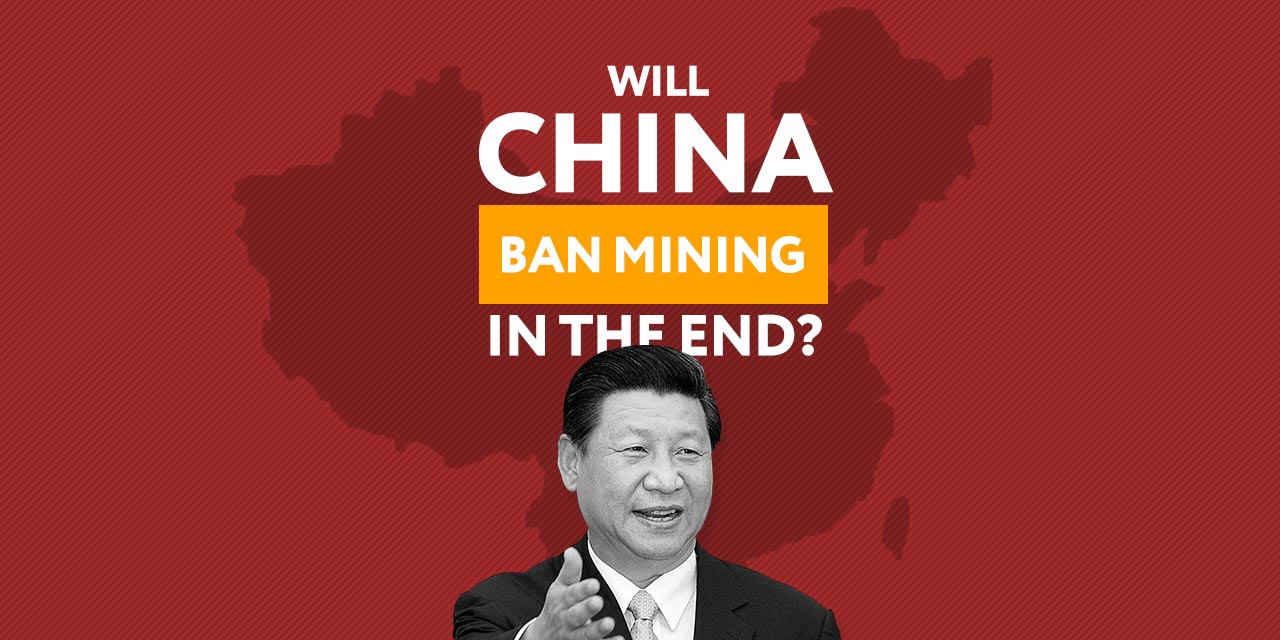 The Chinese government planning agency, National Development and Reform Commission (NDRC), published on April 7 a new version of the report that seeks to manage various types of industrial activities in order to deliver environmental sustainability and eliminate harmful activities. So, will China ban Bitcoin?

Now, cryptocurrency mining is among the other 450 lines of activities, previously included in the list. With the government having a strict control over the China’s economy, this publication can be sign of the incoming doom for the Chinese crypto mining industry.

Importantly, three quarters of all crypto mining capacities are located in the country with miners flocking to regions, offering low prices on energy due to the wide use of hydro-power and coal.

There is no information as to how the government agencies will determine whether certain corporate or individual users consume energy in order to mine cryptocurrencies, but, evidently, an increased usage of electricity can be a valid reason for a follow-up on-site inspection, during which the mining equipment would be found.

Bitcoin mining is an intensive process that has got more difficult as years went by. Notably, most countries have no problem with all matters Bitcoin. This is because a lot of countries have taken an oblivious stance to cryptocurrency. Citizens often engage in cryptocurrency at their own expense and risk. China is certainly a significant exception to this. This is because the authorities are considering specific measures against Bitcoin mining and cryptocurrency in general. As such, bitcoin mining could be an illegal affair in the historically autocratic nation.

In addition, the Bitcoin China affair has definitely been contentious from the start. This is because Bitcoin represents decentralization and autonomy. It goes without saying that the ruling Communist party is keen on centralized control of all social, political and economic affairs. This did not bode well for future Bitcoin China development. As such, the measures currently in consideration come as no surprise. China had originally taken measures to control the ICO phenomenon in 2017.

Now, China has taken steps toward banning Bitcoin mining itself. These come as the toughest measures yet to control the cryptocurrency industry. China banning Bitcoin is apparently under the guise of environmental protection. The National Development and Reform Commission (NDRC) recently announced proposals to this effect. Bitcoin mining is to the regulators an energy consuming affair that needs to be regulated. China bans bitcoin mining as a measure to limit electricity consumption.

“The NDRC’s move is in line overall with China’s desire to control different layers of the rapidly growing crypto industry, and does not yet signal a major shift in policy,”

He went on saying:

“I believe China simply wants to ‘reboot’ the crypto industry into one that they have oversight on, the same approach they took with the Internet.”

The China ban on Bitcoin will obviously come as an escalation on its regulations. The 2017 ban on ICOs and regulations on exchanges were the first steps to this. So, in the grand scheme of things, it is also significant since China is an important supplier of cheap electricity. Also, the ban can definitely be a problem for many mining pools that rely on this cheap power to facilitate operations.

Accordingly, Bitcoin mining in China could take a hit. Miners may be forced to move out of the country. This is because mining and trading will now be significantly more difficult in the country. The future of Bitcoin in China will be interesting to track.

So, some of the mining operations have already migrated to certain municipalities in Canada and Australia where miners also find cheap electricity. Presumably, should this decision go into effect, it will decimate any and all mining enterprises in China, wreaking havoc on the very foundation for security in cryptocurrencies, since it’s these very miners who help prevent 51% attacks and enable easy and low-fee value transfers around the world.

With the current growth trajectory in Bitcoin prices, traders are not sure about whether the news regarding a potential ban have had any significant effect on the bull run.

Finally, the announcement stipulated the comment period till May 7, during which all interested parties can make their views known. However, taking account of the hardline stance on decision-making in China, some experts see clear prospects for a blanket ban on crypto-mining across the whole of China. In a similar move, in 2017 China banned all ICOs and crypto exchanges, failing to recognize any potential benefits that these industries might present.

It’s quite possible that these changes won’t be implemented and it’s FUD.