Chainflip is a decentralized platform easing the swapping of one cryptocurrency by improving inter-chain interaction through atomic swaps, wrapped tokens, and centralized entities.

Engines powering decentralized systems depend on the platform’s functionality. Unfortunately, with diverse use cases, blockchain-based assets are locked on individual networks, limiting transfer and widespread trading. Decentralized finance (DeFi) has been hard-hit, requiring the use of token pools to attract liquidity from different cryptocurrencies.

Apart from pools, other distributed networks employ the use of wrapped digital assets. Generally, wrapped coins maintain a 1:1 peg to their underlying asset while embracing a different blockchain’s token standards. For example, wrapping Bitcoin (BTC) with Ethereum’s token standards effectively ‘converts’ BTC to an ERC20 token.

However, the processes described above consume too much time, and developers only concentrate on leading cryptocurrencies. Thankfully, Chainflip removes the coding process to enable any token to be swapped for another without the need for blockchain programming knowledge.

But how is it possible? Below we explore the Chainflip ecosystem.

Chainflip is a decentralized platform easing the swapping of one cryptocurrency to another. The protocol improves and learns from past projects that have tried inter-chain interaction through atomic swaps, wrapped tokens, and centralized entities. As such, the network removes major bottlenecks found on these systems.

Generally, they are digital currency wallets with multi-signature functionalities to enable access from multiple staked nodes.

A transaction is initiated after amassing a minimum of 2/3 of the votes from all participating parties.

Vaults with the right to write transactions on the system are subjected to a selection process. The platform uses vault rotation to equalize the chances of a node being selected.

Also, vault rotation activates when the number of online nodes drops below a set safe mark. In addition, the main chain facilitates vault node creation and transition to active status.

It manages the interaction between vaults. For example, it supervises node agreements on wallet balances and liquidity pools’ state. Notably, the chain provides permissioned access when altering its state.

Thus, it makes it possible to maintain a shared state. The state chain has three types of transactions; witness, pool balance transfers, and quotes.

Note that witness transactions are only added to the main chain if enough witnesses provide consent. The process serves both incoming and outgoing transactions.

Quoters are entities interfacing general users with the state chain. Therefore, they deliver quotes to the chain. When delivering a swap quote, for example, the quoter verifies that it has the receiving address, slippage limits, return address, among other main and optional details.

Liquidity pools make part of a vault. For example, the liquidity pool handling BTC and ETH includes a section of the BTC vault and the ETH vault. Therefore, one pool can be interfaced to multiple liquidity pools. 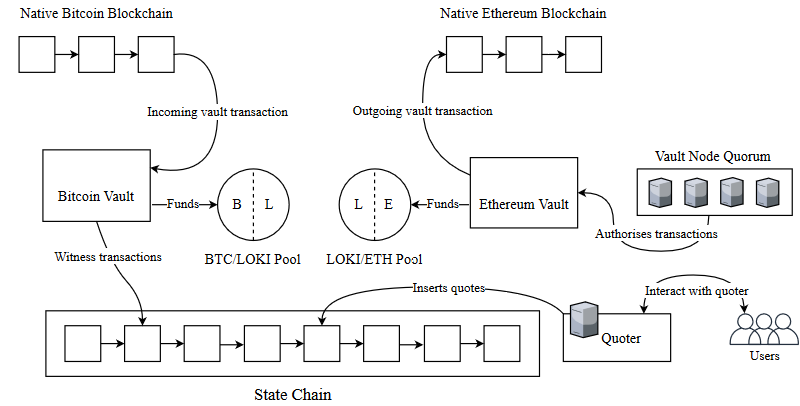 The network implicitly swaps assets within a pool to rebalance the assets, eliminating the need for manual rebalancing.

How Does Chainflip Implement Security?

The network is designed to discourage attacks from financially and non-financially motivated malicious actors. In addition, it guards against trusted actors who may seek to cleverly increase their ROIs. The protocol enhances security through a native currency called FLIP. Staking FLIP provides the chain’s security.

However, to incentivize vault nodes, system emissions are programmatically implemented to ensure continued supply. To counteract the adverse effects of network emissions such as a high inflation rate, which reduces FLIP’s value, Chainflip burns the native token with each swap transaction.

On the other hand, to counter ransom attacks on nodes, the platform optimizes the collateralization of vault nodes.

Other security measures implemented by Chainflip include:

Chainflip has its sight on the future of DeFi and other blockchain-based platforms using automated market-making (AMM). Currently, the fee model used on these platforms is prohibitive.

Some protocols set the fee depending on the amount of funds involved, while others let the demand and supply dictate the costs. To find the best fee structure, Chainflip investigates, and applies the best model on liquidity pools.

By eliminating the need to provide both assets in a liquidity pool, Chainflip brings a new dawn to the DeFi world. The network’s multi signature-enabled vaults provide security to stored funds.