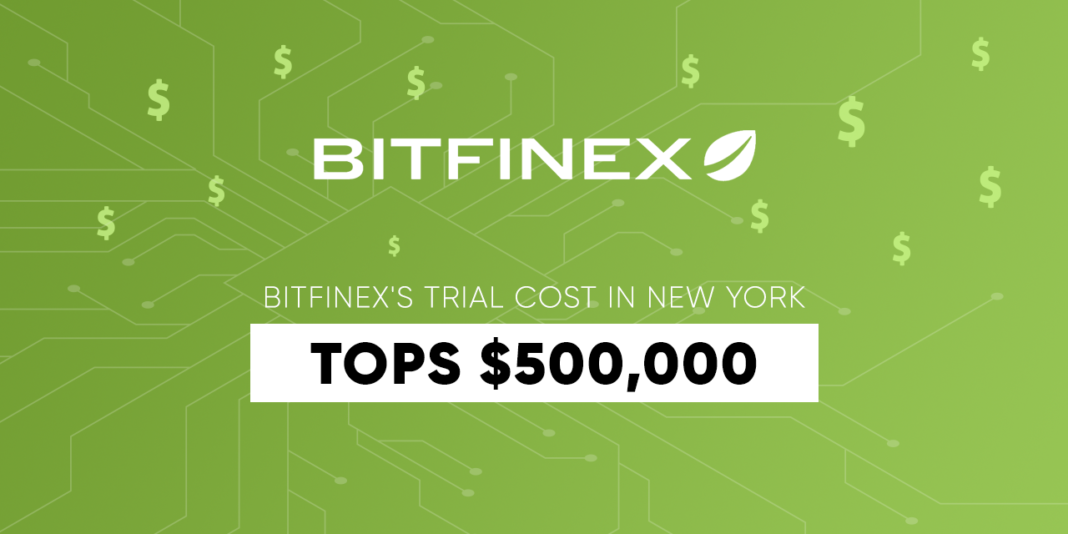 The trial of the Bitfinex exchange over alleged market manipulation with Tether (USDT) has now cost over $500,000. The trial in New York has not yet come to a conclusion and will go on for a further 90 days.

The two companies are currently undergoing trial in New York. At the moment, Bitfinex and Tether parent company iTinex have already paid $500,000 in legal fees. The companies have already given their submissions to the New York Court of Justice (NYAG).

Bitfinex obviously denies the market manipulation bit the NYAG now requires the exchange to go further and disclose financial statements. The authorities have expressed interest in investigating the licensing issues as the companies could have flouted registration requirements.

The Genesis of The Trial

Bitfinex issues stemmed from events between October and November last year. This is because the exchange allegedly colluded to manipulate markets. The precise details are that Tether came under regulatory scrutiny and Bitfinex simultaneously came under fire for perceived unethical conduct.

Speculation was rife that Binance and Huobi were seeking alternatives to Tether stable coin. Tether announced that it would enable direct redemption of Tether to fiat through its native platform.  Incidentally, Bitfinex announced Tether neutrality that very day. This would mean that all USDT pairs would become fiat. Was it all a coincidence? Regulators seem to think otherwise.

Authorities allege that Bitfinex and Tether were behind the rumors of their respective problems.  Meanwhile, the exchange would buy Tether at a very low price and destroy it. After this, the two would pretend that they were all good and cause a Tether deficit with higher prices. This kind of manipulation certainly creates winners and losers.  Incidentally, losers in this scenario would be margin traders, arbitrage and algorithmic traders. Meanwhile, the two companies rake in millions.

Bitfinex and Tether have come out strongly to deny such a motive behind the events around that time. This is why the case is shaping up to be a protracted battle in the legal system.

The trial has been going on in the last few days of July but the hearing did not get to a point of resolution. Hence, the court added the 90-day extension.  The judge decided that the court needed more time to carry out complete withdrawal or deny the Bitfinex withdrawal request. This will allow for further investigations.

On the part of Bitfinex, the burden is not exclusively court fees. The exchange needs more than 10 platforms to communicate between companies and staff. Moreover, the communication has to rely on encrypted channels at times to exchange a large number of documents. This is in addition to the more than 60 people lawyers require.

Meanwhile, the extension is kind of a reprieve for the two companies. Bitfinex and Tether can still perform regular operations including exchange functions. Tether on its part can continue to issue USDT. Nonetheless, the ongoing investigation by the NYAG could mean more evidence and material requests. This means that Tether and Bitfinex should expect more costs in due course until there is a resolution to this matter.