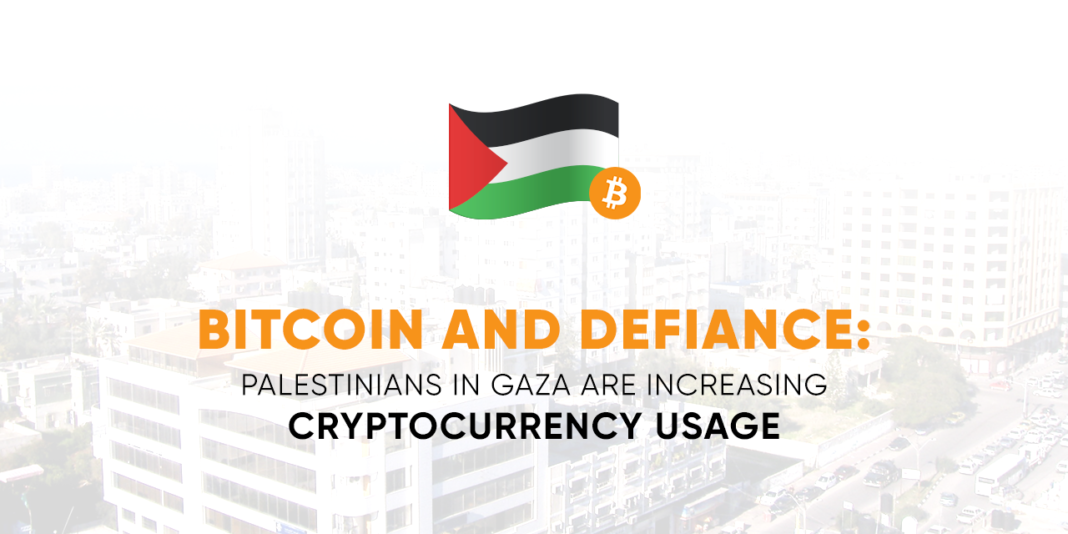 Palestinians in the Gaza region are increasing their Bitcoin and cryptocurrency usage according to a report by Coindesk.

The move to digital currencies has the potential to begin an economic escape from the Israeli government and give them much-needed independence.

Talking to Coindesk, freelance developer and Gaza-based crypto enthusiast Ismael Al-Safadi said he was witnessing a sizeable change in attitude as well as an increased usage of Bitcoin. He claimed to know, “offices that now do $5 million to $6 million a month,” in Bitcoin transactions.

Previous reporting from Coindesk also further illustrated the increased usage of Bitcoin traders, with one serving around 50 clients a month. Other sources backed up this claim, stating that there were at least 20 dealers in the region.

Although it is hard to quantify due to Palestine’s disenfranchisement from global crypto exchanges and banks (much like Iran), the power of Bitcoin and its defiant qualities seems to be getting through to the people. Al-Safadi said there are around 10,000 occasional bitcoin users in Gaza based on his social media accounts.

This number is only set to grow, especially as their newly elected Prime minister, Mohammad Shtayyeh has vocally expressed his support for a Palestinian national cryptocurrency. The PM hopes it will release Palestine from reliance on the Israeli Shekel and allow the nation to have its own currency, something that was outlawed in the 1994 Paris protocol.

Why are people in Gaza turning to Bitcoin?

Part of the reason for the increased Bitcoin usage is due to the Palestinian’s consistent disenfranchisement from society. Paypal and other online payment services exclude Gaza and other Palestinian held territories, meaning many have small options if they wish to partake in international transfers and pay freelance work.

Banks are also difficult for international transfers. The threat of US and Israeli authorities blocking or curtailing them is an ever-present danger, something they did to Gaza following Hamas’ election in 2006.

Fortunately, Bitcoin has proved a fantastic way to combat these injustices.

The rebellious and empowering qualities of cryptocurrencies are certainly something the people of Gaza can get behind, especially with their history. The small region made headlines after protests against the Israeli regime saw violence not seen since the Gaza war in 2014.

According to a Human Rights Watch report: “Between March 30 and November 19, security forces killed 189 Palestinian demonstrators, including 31 children and 3 medical workers, and wounded more than 5,800 with live fire.”

Fresh protests also happened today on the Gaza fence. Despite the violence and painful moments that have come to be the norm in the region, some are at least trying to bring some light into the area and are using Ethereum to do it.

An unnamed source who spoke to Coindesk said he was looking to create an Ethereum based charity platform. The initial pilots are going to be handed out in the form of crypto donations to schools in Gaza and the West Bank, with the testing phase starting two weeks ago.

The source was pleased to say that the power of cryptocurrencies was being played out in Palestine. He told Coindesk:

“People there [in Palestine] are starting to learn and ask about it. … Palestinians are more using bitcoin [than ether] … to make international transfers and to bypass Israeli control.”

One of these steps is the regulation and creation of exchanges for the region. Currently, there is little accountability as most transactions are done by IT savvy people in the area. These traders are also in a risky position too, mainly due to the link between Hamas funding and cryptocurrencies. This could also prove another potential hurdle for those partaking in normal cryptocurrency usage.

Whether the Palestinian crypto revolution and economic independence movement will overcome these obstacles is hard to say. But the power of Bitcoin for economically shackled peoples is clear.