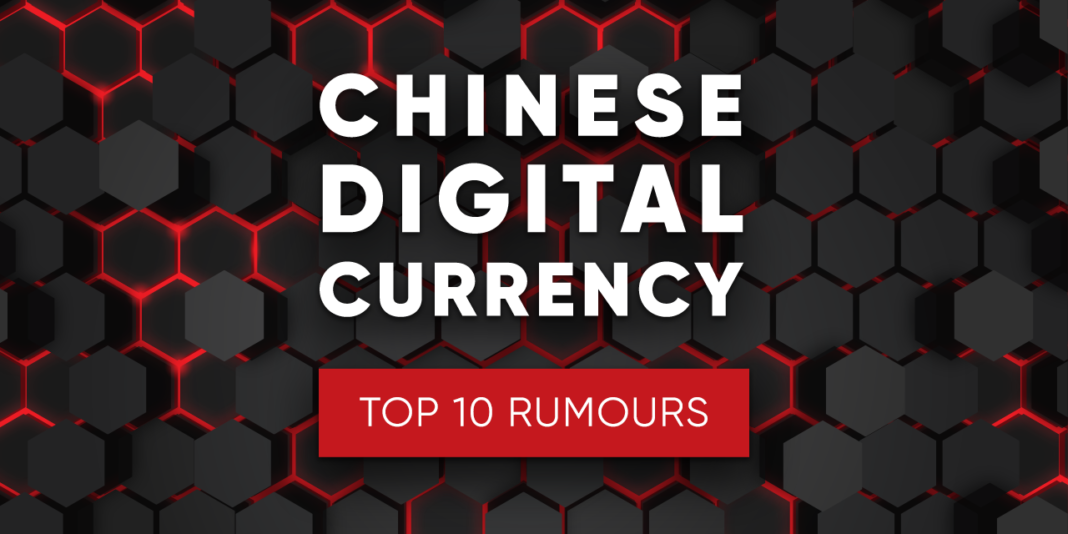 It’s now five years since a Chinese digital currency or a was rumored to be in the works. Unfortunately, the People’s Bank of China (PBoC), China’s central bank, has little to no evidence of those plans ever taking shape within the years.

However, a series of rumors have given the crypto community and the world at large hope to see the first sovereign digital currency. Notably, the rumors concentrated on its functionalities rather that its launch date and the parties, apart from PBoC, involved.

Here is a rundown of the top 10 rumors:

1. It will cut the cost of handling paper money

This was among the first vision PBoC had when working towards launching a Chinese digital currency. Apart from reducing costs, a digital currency would help the Chinese government to control its money supply. Additionally, it would assist regulators in the country to curb financial crimes such as tax evasion and money laundering. Moreover, it would go a long way in enhancing the country’s economic activities.

2. Won’t be blockchain-based and it won’t be decentralized?

The technology behind the coin is something that is quite confusing.  Although it will be a cryptocurrency, reports have suggested it won’t be blockchain based. Deputy director of the bank Mu Changchun spoke on the technology, saying that it may not be made in a traditional cryptocurrency way, with the PBoC veering away from adopting blockchain.

Chinese officials have also confirmed that the Chinese digital currency will be centralized. In October 2017, the Director of PBoC’s Digital Currency Research Institute, Yao Qian, said that “the role of central banks may not just be deciding how much to supply but also designing the rule of the supplying algorithm.” Qian added that a central bank-backed digital currency (CBDC) should not be solely confined within the blockchain and the distributed ledger technology.

By developing a digital currency, it’s anticipated that the PBoC is seeking to replace the country’s money supply. Interestingly, the move is meant to positively affect sectors such as retail payments, interbank clearing, and enhance cross-border payments by improving on the speed. But, it’s not all about replacing its cash supply; it’s also about taking Renminbi (RMB) to the international scene.

4. From fractional reserve to full reserve

Unlike the fractional reserve which is employed by the traditional financial system, and which is used by the Tether stablecoin, the Chinese digital currency is rumored to employ the full reserve system. Therefore, instead of maintaining a percentage of the reserve ratio, it will maintain a 100 percent reserve ratio. This approach, as noted by Binance Research, will not challenge the existing monetary policy.

Another rumor that has surrounded the Chinese digital currency is that it will be compatible with smart contracts. Unfortunately, the PBoC has indicated that its CBDC will only accommodate smart contracts that support basic monetary requirements.

According to Qian, PBoC’s digital currency will use a two-tiered system to facilitate its flow from the central bank to its intended users. Notably, the upper tier will feature the central bank’s database while the lower level will comprise of the external financial institutions’ databases such as those from commercial banks.

This approach was also alluded to by Changchun, Deputy Director, Payment and Settlement Division, PBoC. Changchun mentioned about the system at the China Finance 40 Forum on August 10.

As per Changchun’s speech, and as reported by Forbes:

“The two-tiered system is designed to curb public demand for other cryptographic assets, consolidate China’s national currency sovereignty, ensure that the central bank maintains control over monetary policy affecting the currency [and] increase the likelihood of people using the currency.”

7. It will precede Facebook’s Libra

Facebook threw regulators into a spin when it announced that it would launch a stablecoin, Libra, backed by a basket of fiat currencies. Unfortunately, despite the Chinese currency being among the leading currencies in the world, it wasn’t included in the basket.

To prevent Libra from overshadowing the Chinese fiat currency, it was rumored that the Chinese digital currency would launch before Facebook’s Libra. Surprisingly, recent rumors point towards this possibility.

9. Issuers have already been selected

This is among the latest string of rumors. As first reported by Forbes, the launch plan of the Chinese digital currency has been finalized with issuers already selected. While quoting, Paul Schulte, a former employee of China Construction Bank, Forbes reported that the first bunch of firms that have been selected to issue PBoC’s CBDC, includes the Bank of China, the China Construction Bank, the Agricultural Bank of China, Alibaba, Tencent and Union Pay.

Unfortunately, being a rumor, Tencent, among other firms, has come out to refute the rumors claiming that the information constituted an inaccurate guess and was too unreliable.

10. It will be issued during the double eleven shopping festival

To close off our list of the top ten rumors surrounding the Chinese digital currency is a rumor about its launch date, November 11. This is the busiest shopping day in China and commonly referred to as Singles Day.

According to Changchun, PBoC’s digital currency can be considered to be ready and will be launched in the next few months.

Probable reasons behind the rumors?

With all these rumors, it begs the question of why the PBoC would entertain such claims since it has not come out openly to deny or affirm them.

PBoC has it all planned out. First, it wants to achieve the effect of international communication. Also, it screens the feedback from the local market. These effects, from an opinion point of view, will largely contribute to the adoption of the Chinese digital currency when it’s finally launched.

Secondly, while it may be ‘rumors’, the fact that it was first reported by Forbes, a current affairs news outlet, broadly indicates that the reports were originally confidential. However, a leak was blamed for being an unfounded rumor.