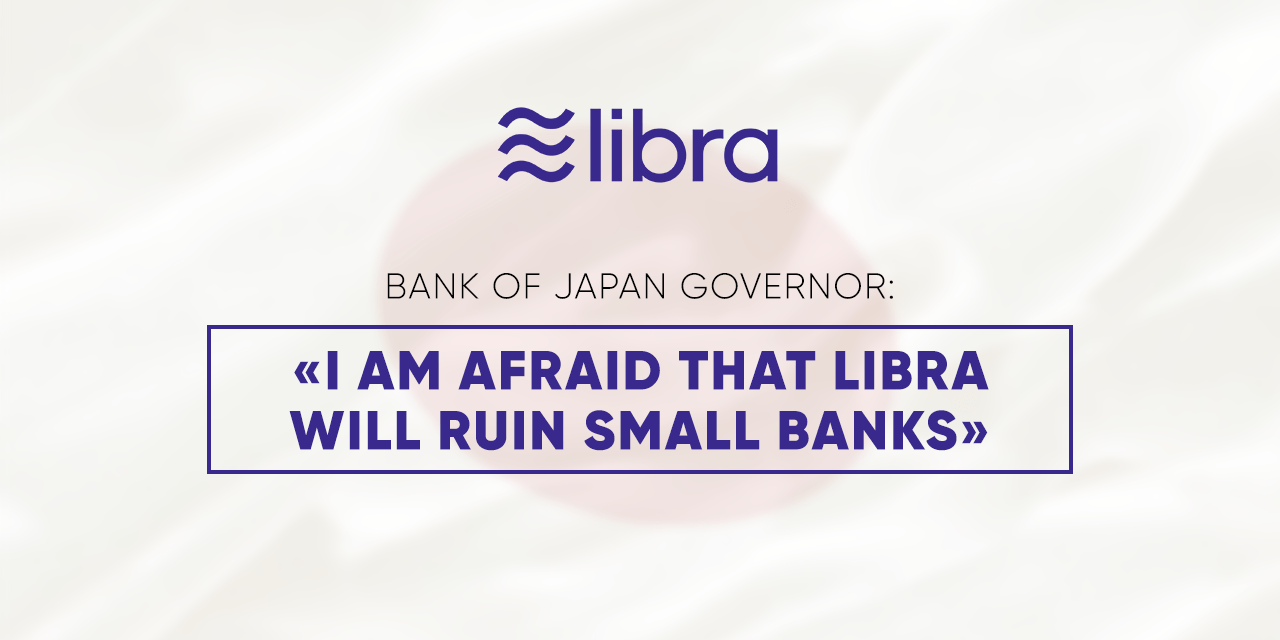 The Governor of the Bank of Japan believes that Facebook’s Libra Coin could pose a significant threat to smaller banks. This statement comes as institutions and experts worldwide continue to assess the possible impact of this unique cryptocurrency. As a matter of fact, many financial regulators around the world have concerns about the risks of Libra.

Accordingly, the Nikkei News Asia Review reported that the Bank of Japan is concerned that Libra, with a ‘’basket of legal tenders” and government securities will pose difficulties for the existing financial system.

Facebook is a gigantic corporation with extensive influence across the world. This is because the social media powerhouse is the king of big data and has to work with government agencies across the world in developing policy. Moreover, Libra is already tied to a number of legal ties. This increases the likelihood that Facebook could circumvent the control of national regulators in some jurisdictions.

The Governor, Haruhiko Kuroda essentially touched on this. Furthermore, he stated that he would closely study whether Libra would be widely used for payment. This will reveal its impact on existing financial and payment systems.

“Libra can transfer funds to an absolutely virtual world and is therefore completely different from other forms of digital payments.”

What concerns Japan is that Libra users will probably withdraw money from regional banks to purchase tokens. In the event that Facebook deposits reserve funds in larger banks, this will have a detrimental effect on the liquidity of small banks. Additionally, an increase in the demand for Libra and government bonds will cause interest rates to fall. This can damage the financial stability of Japan. Accordingly, officials from the Bank of Japan contend that the project needs to be “freely piggybacked” on a high-cost financial system.  This will also mean that institutions dealing with Libra need to set aside money to deal with regulatory complaints.

Japan Is certainly not alone in having concerns about Libra. The USA is obviously keen on developments because it is Facebook’s native country. Switzerland, as well, is watching developments keenly as it the location where Libra will set up base.

In the USA, A group of Democrat lawmakers has sent a moratorium to Facebook executives urging a suspension of Libra developments. The lawmakers also urged the Financial Services Commission to have a hearing to clarify the status of Libra.  This goes to show the concerns over user-privacy among others.

They signed a letter that read in part:

“Although Facebook has published the project ‘White Paper’, information about Libra and Libra’s intentions, roles, potential uses and security is very little, it exposes the project’s large-scale risks and lack of clear regulatory protection. If these products and services are improperly regulated and not fully supervised, it is likely to pose systemic risks that threaten the financial stability of the United States and the world. These vulnerabilities may be attacked and concealed by bad actors, because of other cryptocurrencies, exchanges and wallets have had similar problems….”

Facebook will have to do better in its effort to market Libra to regulators. There is no doubt of the disruptive potential of this project to finance. However, regulators seem to be seeking better assurances will be of a positive kind. Japanese regulators are only stating the obvious.