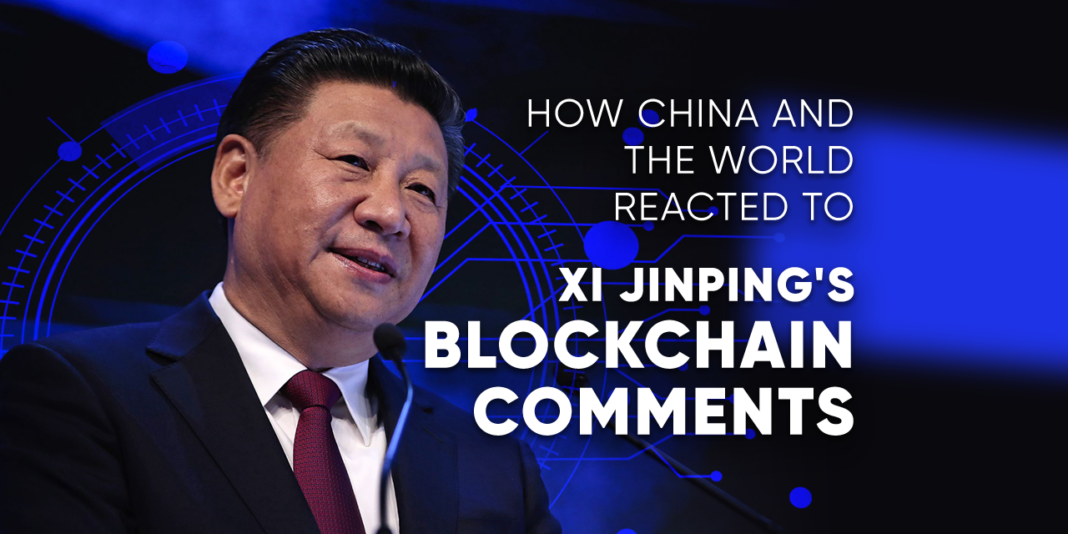 The leader of the Communist Party of China reaffirmed the trend of the past five years with his keynote speech that welcomed the dawn of blockchain technology in the country. He told members of the party:

Many provinces across China had already been utilizing the technology behind cryptocurrencies but now Xi wants it to be a national policy as he believes it will give China an edge in economics and governance.

The reaction from across the world was impressive. Bitcoin saw a huge price jump of around 13%, with many commentators talking of a Xi pump. Figures show just how influential Xi’s words were to all parts of the industry as the figure below shows the price jump not just for Bitcoin but other altcoins.

Blockchain companies in China also saw a huge jump in interest. According to an index put together by East Money Information, 200 companies that invest in blockchain technology saw their stocks go up around 8% on the Monday following Xi’s speech.

Commentators from the West and in China were all looking to analyze what Xi’s comments mean for the industry as a whole and where this leaves the industry in China, a nation who has banned cryptocurrencies and many related industries within its borders. Exchanges also looked to jump on the Xi created hype.

Here is a compilation of the leading responses from those in the know as well as the reactions from industry institutions:

With the news abuzz with Xi’s comments and the Bitcoin price jump, many saw this as potentially the dawn of a cryptocurrency era in China. This was all despite Xi not mentioning cryptocurrencies apart from to say they should be regulated and not withdrawing China’s ban.

Yet so great was the reaction from many, the state media newspaper China Daily had to clarify that Xi made little mention of crypto and warned, “We must remain rational”. The paper also said:

However, perhaps this was too little too late from the government. Universities rolled out blockchain courses and the Chinese public was certainly more enamored with the industry. This was illustrated in the huge amounts of people seeking out information on Bitcoin and other cryptocurrencies. Wechat searches increased tenfold with 9 million people searching for Blockchain and 1 million typing Bitcoin into the search bar.

Blockchain and cryptocurrency commentators were jubilant and rejoicing at the seal of approval for elements of the industry which has seen many difficult periods, especially with regards to government regulations and control.

Meng Yan, deputy dean of the Institute of Digital Assets said in his piece on Jinse that he is “very confident that under President Xi’s tone, China is likely to become the leader in the global digital economy.” This announcement from Xi he felt signified the start of China’s leading role in the digital arms race against the US and was “eagerly expecting that China can take advantage of the system, talents, and technology”. He concluded with his surprise at Xi’s comments saying:

“I did not think that our country can respond so quickly, which is very exciting.”

Xiao Wei, Peking University professor and commentator was less buoyed by Xi’s speech and called for caution from the industry, especially the cryptocurrency sector. He said, the “speech is not an endorsement of virtual currency,” and that, “if you seriously analyze it, you will find that the innovation of the blockchain mentioned in the speech in the financial field does not mean issuing virtual currencies like Bitcoin.”

However, what was most pleasing for Xiao was the numerous possibilities that Blockchain could bring to China and the fact that Xi could understand its usefulness in, “many fields such as medical care, food safety, poverty alleviation, education, and pensions” through his “Blockchain+,” idea. Xiao hoped blockchain would show its ability to “penetrate into all aspects of society.”

So what about the western reaction to the news? Well, Mark Zuckerberg clearly had his thoughts on China’s impact at his Senate hearing as he implored the committee to see his way of thinking in order to challenge China. Surely with Xi’s speech, he will be thinking a little harder and feel perhaps emboldened with his assessment.

Michael J Casey, a writer for CoinDesk called on the US to respond. Gabor Gurbacs, director of digital assets strategy at investment firm VanEck said a similar thing, tweeting: “I wish the United States took a similar supportive approach.” Misha Lederman, head of communications for cryptocurrency Beatzcoin, asked, “When will the US wake up?”

Some have claimed that this is just an attempt from Xi to stimulate a floundering economy. An anonymous Chinese economics professor told Voice of America news that, “Xi’s rushing to touch upon [blockchain technology] and fueling the blockchain fever shows that he couldn’t find other feasible stories to boost the local economy.”

Some exchanges were so pumped up about the contents of the speech that they began taking action to appeal to the Chinese market. One such exchange was FTX who launched an index of eight popular Chinese tokens.

Changpeng Zhao, the CEO of Binance said the move from Xi ignited a fire under the Chinese public, in a video on Periscope. As a result, his P2P Chinese network on Binance, which launched on October 9th, saw a big spike in transactions.

Zhao, who is Chinese believed that this is a pivotal moment not just for China but the world in terms of regulations and a digital arms race. He said:

“I do think China will move ahead very strongly in the cryptocurrency, in the blockchain space. And for any country that’s not considering this,  I think they’re now in real danger of being left behind.

“As many people say, there’s a real race going on. So I think given that one of the largest populations on the planet is adopting blockchain, I think we will see favorable regulations – competing regulations –from other countries very soon.”

Clearly, Xi’s comments were very important. The markets reacted, blockchain companies saw a spike in interest and Chinese citizens were intrigued. But, a lot of this seems to be an overreaction.

There is nothing to suggest that China is opening its doors to cryptocurrencies, in fact, it would seem the opposite. The government through its state media has essentially said so itself. Xi’s comments were just a reaffirmation of a long-standing policy of blockchain adoption and usage. Any close following of Chinese blockchain usage will illustrate this.

However, what is most telling is the US commentators worried about where this left them in the future digital age. China has signified that it wants to be at the forefront of what they must believe is the future of technology and economics. That fact is what should be looked at and celebrated the most. The second most powerful man in the world (at the moment) has ushered in a new dawn, with blockchain and cryptocurrencies playing an integral role in world politics.

Few would’ve thought that just over a decade ago.