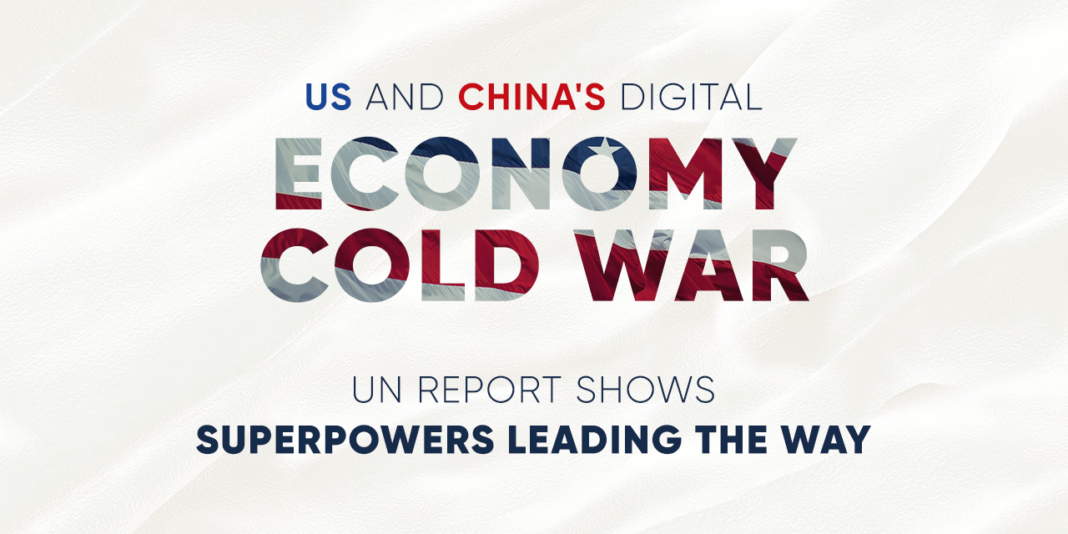 A UN report has shown that the global superpowers of the USA and China are leading the way in the digital economy, perhaps illustrating a cold war-like race to digital dominance in the internet age.

Created by the UN Conference on Trade and Development (UNCTAD) and released last Wednesday, “the Digital Economy report”, is said to be the first of its kind delivered by the world governing body.

USA and China leading the world

The report highlighted the dominance of the two superpowers, saying that the US and China accounted for “75 percent of all patents related to blockchain technologies, 50 percent of global spending on the “Internet of Things” (IoT), and more than 75 percent of the world market for public cloud computing.”

Not only that, but the two nations hold 90 percent of the market capitalization value of the world’s 70 largest digital platform companies. This is due to the major internet companies, like Apple, Amazon, Google, Facebook heralding from the US and Tencent as well as Alibaba from China.

The aggressive expansion of these companies is no doubt a deciding factor in the dominance of the US and China. In terms of digital currencies, Facebook is the most notable in its currency move. Most of these companies have looked towards blockchain too, like Alibaba and Baidu.

With these two superpowers leading the charge, are we seeing a cold war type race for digital dominance? Shamika Sirimanne, director of the Division of Technology and Logistics of the UN Conference on Trade and Development (UNCTAD), certainly thinks the tussle is telling at the world political outlook. She told the media that it illustrated a move from the North-South divide to two competing powers.

Many feel the move from China to make a national cryptocurrency was in response to the threat of Facebook’s Libra token on the global economic hegemony. Many Chinese analysts were worried about where this left China following Libra’s White Paper. It seems this worry went to the top people in Beijing, with the proposed token and now with Shenzhen set to trial a new digital age. China has also been a leading nation in blockchain technology, with numerous provinces increasing its usage.

Clearly, China sees this as a digital economy race and don’t be surprised if the two nations are leading the world in this area in the coming years. Who will come out on top remains to be seen.