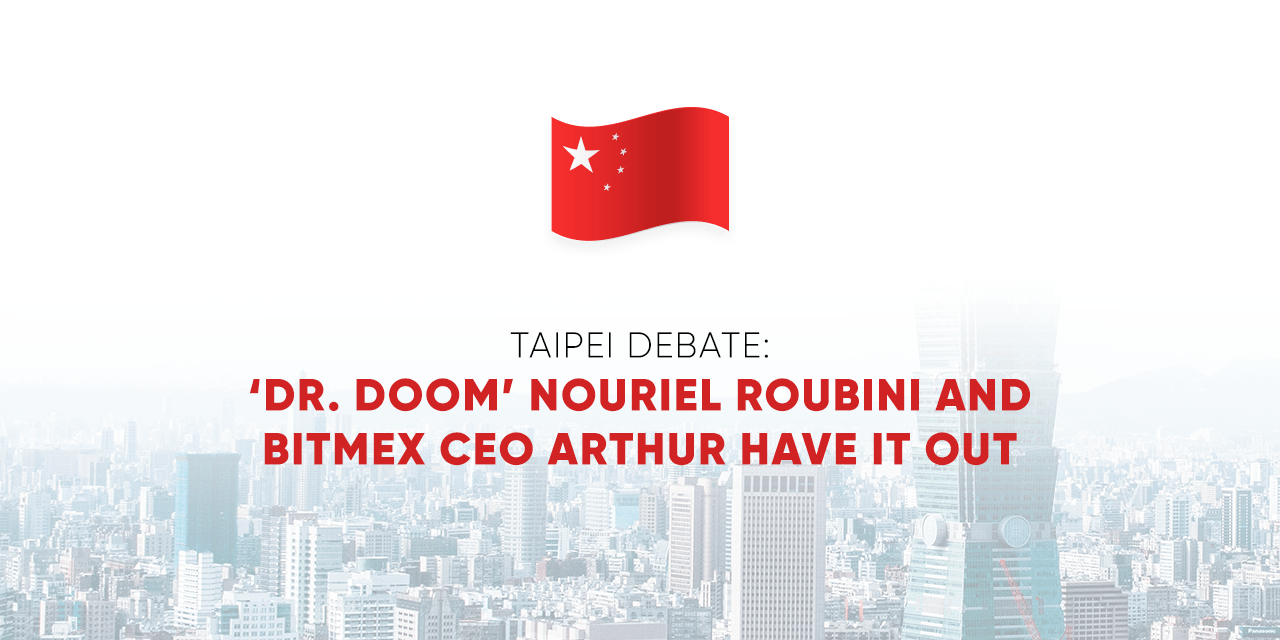 The 2019 Asia Blockchain Summit in Taipei discussed the topic of whether cryptocurrencies were safe or a scam this week, with a heavyweight debating clash the highlight. Economist, and outspoken crypto critic Nouriel Roubini (aka “Dr. Doom”), recently had an explosive debate with BitMEX CEO, Arthur Hayes, in Taipei, Taiwan.

The debate was characteristically tense and sparks flew from time to time. Even after the debate, Roubini went online to demand that a tape of the debate be released, with the anti-crypto man confident of a victory. So who is this person nicknamed Dr. Doom?

Who is Dr. Doom and his Opponent Hayes?

Nouriel Roubini is an American Economist who teaches at the New York University Stern School of Economics. He has also founded Roubini Global Economics consultancy firm. Roubini perhaps gained credibility because he was able to call the financial meltdown of 2008. This is because he is an expert on economic collapses.

With regard to cryptocurrencies, Roubini has taken the skeptical approach. Bloomberg reported that Dr. Roubini claimed that cryptocurrencies were bunk. This is because of its technology, low security and lack of convenience. Notably, Roubini formulated a very harsh report on cryptocurrencies to the US Senate Banking Committee.

On the other hand, Hayes is the founder and CEO of crypto trading site BitMex. Naturally, you would expect him to promote cryptocurrency because it is obviously consequential to his enterprise. That said, he is also experienced in cryptocurrency in his own right. Whilst admitting that crypto had some bad actors, Hayes defended the overall role of speculation, saying:

“People love to speculate…We’re just trying to give them an opportunity to do it in a safe manner.”

Roubini took a drastic approach in claiming that Bitcoin is not as secure and decentralized as many would think. Hayes replied that the coin is secure enough because at a market capitalization of over “$200 billion” it is yet to be hacked. However, he reminded the audience of the importance of storing their own coin safely. This is down to the threat of stolen private keys.

Dr. Doom took the debate a notch higher claiming that the world didn’t actually need cryptocurrency because of inventions in AI and Fintech.  Such developments have resulted in inventions like Unified Payments Interface (UPI) in China such as WeChat and Alipay.

Hayes stated the importance of digital payments. Additionally, he stated that Bitcoin and cryptocurrency give you one thing over these Fintech channels: Privacy. This is because such payment channels would only increase the power of centralized giants like Alibaba and Facebook.

Both see very different outcomes for the cryptocurrency revolution. On the one hand, Hayes sees the promise of a new trillion dollar economy while Roubini thinks it will all come crashing down to zero. The two are vehement in their belief and the debate unsurprisingly went off the rails.

The debate even got personal with Roubini even calling Hayes a “coward” and “sleazy”. This is why he called for a tape of the actual debate to be released. The debate on the sustainability of crypto is one that will certainly intensify in the coming months. No matter which side you lean on, these two are doing a fantastic role in creating a conversation.