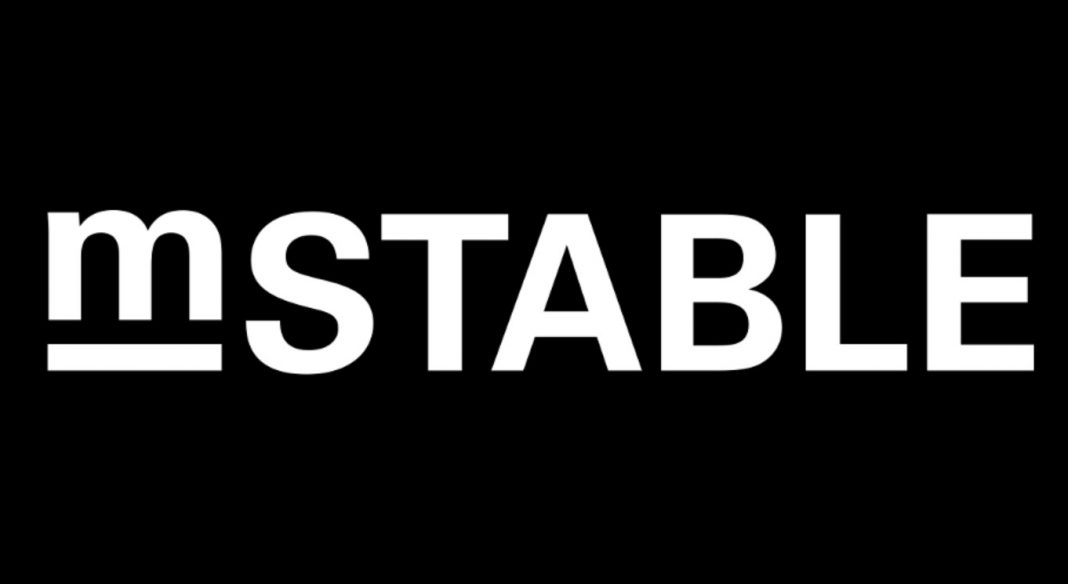 mStable is a newly launched DeFi protocol aimed at streamlining the application of stablecoins in a unified ecosystem it aims to create.

There are many projects that seek to increase the adoption of cryptos by linking them to traditional financial systems. Stablecoins, for one, have been created to do just that. Using blockchain and smart contracts, the crypto community has devised a way to make digital asset representation of fiat currencies.

But even behind the recent developments surrounding stablecoins, a concern still remains: the assets that back the number of stablecoins we have to date are not as secure as they are supposed to be.

mStable wants to address this problem.

James Simpson, CEO of mStable, began working on the project back in February 2020. Simpson saw a problem with most stablecoins in the space. A lot of them were pegged to the same asset.

In addition, there is not much return for users of other stablecoins if they stake their assets. Simpson conceptualized mStable based on these issues.

To make a protocol that is safer for investors and crypto users alike, mStable was built around the idea of unifying pegged assets into a single basket. This helps diversify the risks for users and makes mStable more resilient to market volatility.

mStable is a newly launched decentralized finance (DeFi) protocol aimed at streamlining the application of stablecoins in a unified ecosystem it aims to create. All without compromising safety and effectiveness.

It also takes advantage of a permissionless network where its operations are mainly user-incentivized. Through its governance token, the Meta (MTA), users can be part of how the system is managed, including its security and governance.

mStable rose to prominence in DeFi recently for its promise of profit to investors, as well as its solution to the issues most stablecoins face.

Stablecoins are cryptocurrency assets pegged to fiat currencies. Its aim is to mesh together the world of crypto and the traditional financial system.

Take Tether (USDT) or TrueUSD (TUSD), for instance. Both are USD-backed stablecoins. The problem that their value can change drastically depending on the condition of the fiat currency that backs them.

mUSD’s value is backed by a basket of whitelisted tokens representing it. The backers of mUSD also benefit from mStable’s built-in yield mechanism through Swap fees and lending collateral.

In terms of liquidity, mStable’s is backed by a pool of mUSD and USDC. It can be checked at mStable’s balancer pool.

mStable mainly has the mUSD as its mASSET. mUSD has three main functions for users: Mint, Swap, and Save.

Each user can freely mint their mUSDs just by putting either their DAI, USDC, USDC, or TUSD on the platform and get its equivalent amount in mUSD. Sending 100 USDT for example, allows you to mint mUSD on a 1:1 ratio.

mStable’s basket of assets are balanced to prevent overdependence on a particular asset. This makes it safer to mint mUSD’s for each user because if one stablecoin backing the mUSD falls, other stablecoins can still support it.

mStable does this by setting a cap on the amount of assets that can be placed to back each basket. The point is for baskets to be backed proportionally with other stablecoins. If there is too much of a particular stablecoin, mStable’s interface automatically alters how users can mint, swap, or redeem mUSDs based on the maximum weight for each asset.

Swapping is the act of trading assets from mStable’s basket for another digital asset with the same ratio. mStable offers zero price slippage on swaps and no limit to the amount that can be swapped — but only if they do not exceed the maximum weight set for each particular basket. 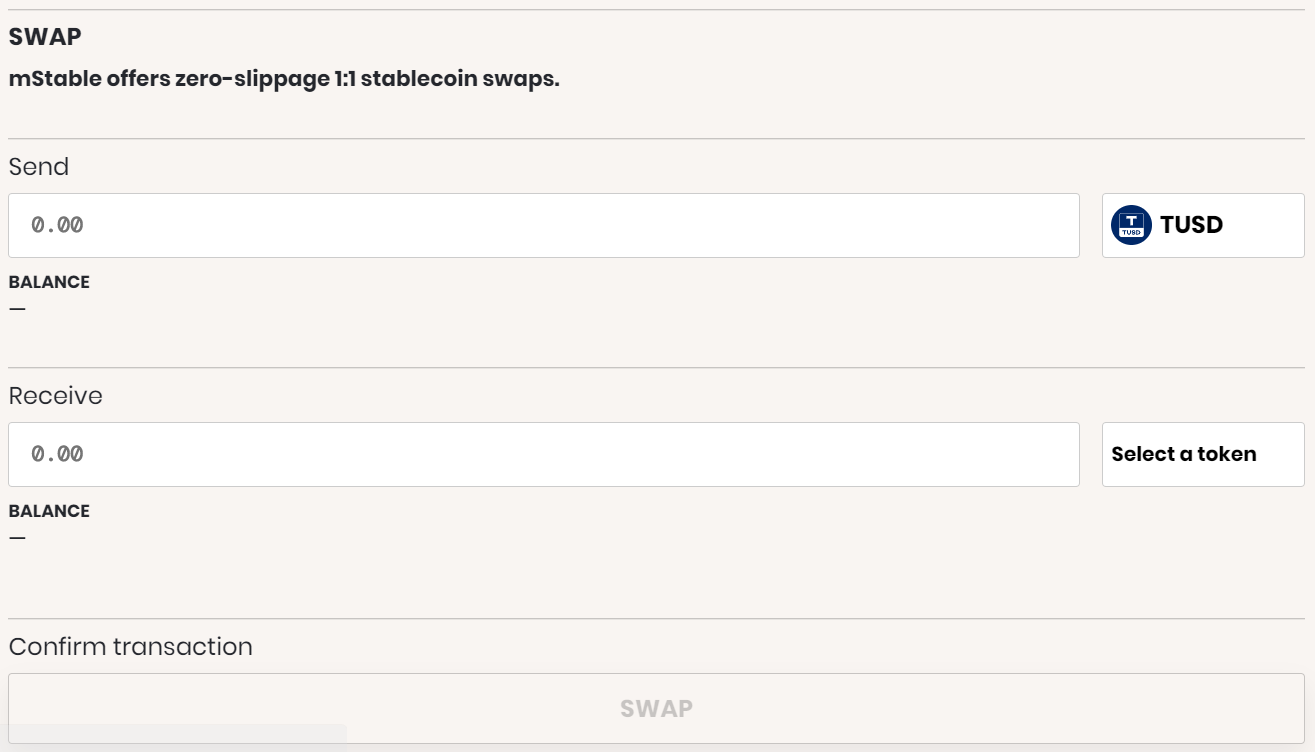 Swapping also follows the 1:1 ratio to maintain compliance to the maximum weights set by mStable’s governance.

Users can earn interest and platform fees from the amount of assets that they have deposited in mStable’s baskets. To make this work, assets held in baskets are either loaned to other Defi platforms to let it earn interest over time, or distributed for mStable swaps to earn fees. 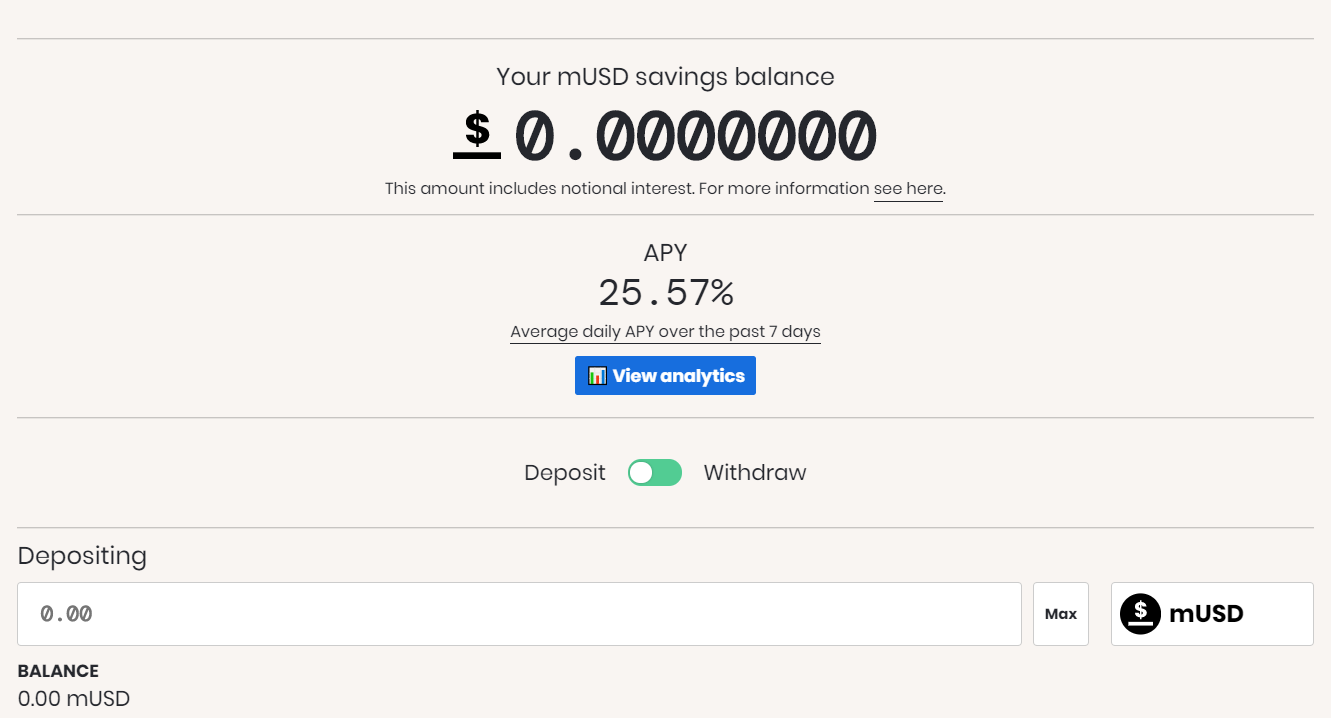 Meta (MTA) is the native token for mStable. As an important element of the protocol’s decentralized feature, MTA has the following functions:

There is a total supply of 100 million MTAs, with 20% of it reserved for public rewards and for future reward allocations. 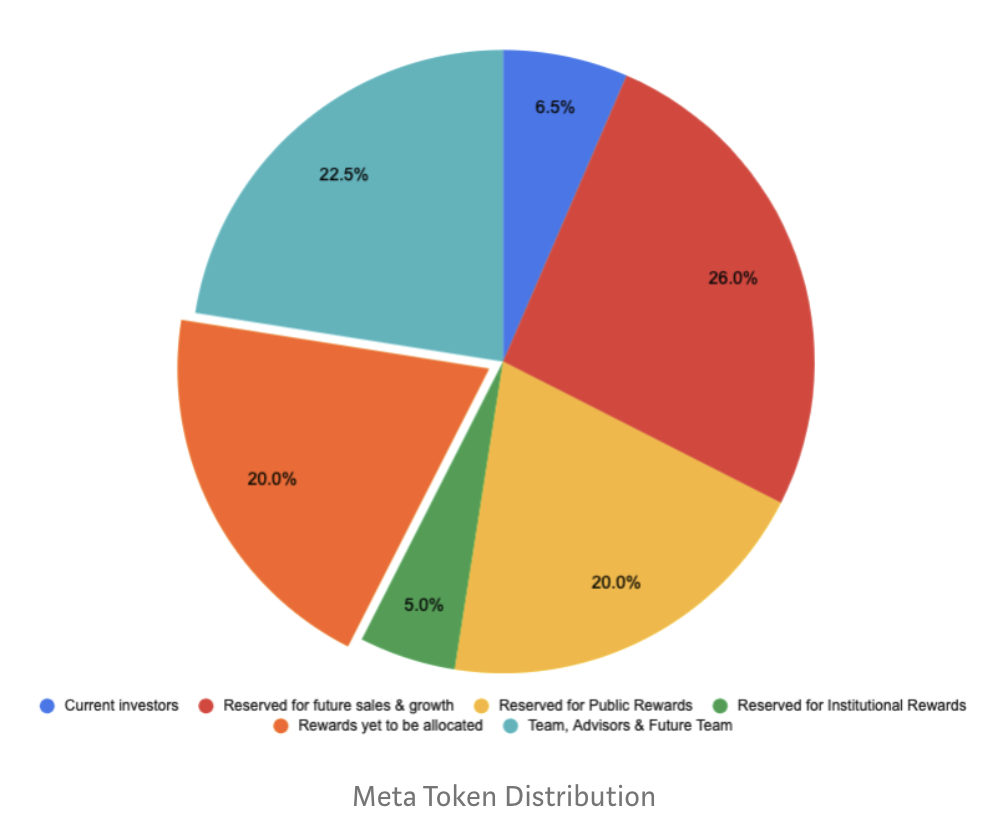 Here is a breakdown of all MTAs for distribution, according to mStable:

It is important to note, however, that as of this writing, MTA does not yet exist. According to a release from mStable, they are planning to launch it in the coming weeks.

Store of Value – Resources can be kept in mStable’s basket assets to earn interest. And since it is backed by multiple stablecoins pegged by the same fiat currency, they can be more stable than other assets of the same kind.

Like other DeFi projects, mStable also offers its users the option to stake. This is a process where users can deposit a particular amount of their crypto to gain proportional voting rights in terms of governance decisions for the protocol.

Once they stake, they become Meta Governors. And in exchange, they are incentivised by being given a percentage of interest and platform fees from mStable. Another purpose for this is to compensate for the risk in staking MTAs.

A portion of what they stake can also be used in order to address system instability or liquidation events.

Among the parameters of the protocol that they can be involved with are the following:

Black swan events have always been at the back of the mind of every DeFi user. DAI’s massive liquidation when ETH dropped in value last March can support this idea. dForce hacking also contributed to the worries of crypto users.

If the DeFi community wants to bring back the belief of the crypto-space to DeFi innovations, the success of mStable could be the way to start. mStable’s promise to design a system that minimizes the risk of liquidations could just be the right step to renew people’s faith in DeFi.