Mina protocol is a cryptocurrency with a succinct blockchain storage and verification mechanism, which limits and maintains the total blockchain size consistently.

Most existing blockchains are extremely large in size. They record and store literally all transaction history or events on the network, which increase (sometimes exponentially) with time and activity. In the long run, it might not even be practical to store all this information. For instance, Bitcoin‘s blockchain size is ~315 GB and that of Ethereum ~577 GB currently.

This poses a problem as it takes a long time and too much hard drive capacity to store them to run a node (or network infrastructure). It presents a unique problem, entry barriers resulting in few clients or sources being able to verify activity and contribute to the network, thus, harming decentralization. This is where Mina Protocol is intended to make a difference.

Formerly known as “Coda Protocol”, Mina was created by San Francisco based O(1) Labs with the aim of making the crypto experience more accessible and user friendly. The O(1) Labs raised $3.5M seed funding in 2018 and $15M in 2019. The name was changed in response to a lawsuit made by the Corda R3 blockchain team, due to the fact that the name was too similar.

Mina protocol’s advisory team consists of Jill Carlson, who has previously worked with the International Monetary Fund and Goldman Sachs in various capacities. Other team members include computer science and cryptography academics Joseph Bonneau and Benedikt Bunz in advisory capacities.

Uniquely presented as a “succinct blockchain”, Mina protocol defines a novel blockchain storage and verification mechanism, which limits and maintains the total blockchain size consistently. According to the official source, Mina protocol will always stay the same size – a measly 22 KB, regardless of time and activity parameters, which ensures high throughput since it’s easier to corroborate the records.

The benefit of the world’s lightest blockchain is that the whole database can be accessed and verified by literally any device since the storage requirements are tiny and the entry barriers are low enough for most to fulfill. Furthermore, since everybody can run a node with minimal requirements, it aids with decentralization and security.

What Makes It Work?

Mina protocol is powered by Proof of Stake (POS) and zk-SNARKs or “Zero-Knowledge Succinct Non-Interactive Argument” technology. It’s a type of cryptographic proof, which guarantees authenticity and genuineness without many footprints. On a basic level, it allows a party to prove possession of certain information without actually revealing what it is.

Therefore, each time a block is produced, it also generates a zk-SNARK proof. This serves as a valid proof that all the blocks produced prior to the new block are, in fact, also valid. This ensures that nodes can move forward merely by storing and relying on this data, without having to store the whole bulky tx record or history, since the beginning.

A large number of significant investors are betting on Mina protocol to deliver and perform. This includes famous serial entrepreneur and investor Naval Ravikant, Coinbase board member Fred Ehrsam, Andrew Keys of ConsenSys Capital and Charlie Noyes of Paradigm. Further, the organized funds supporting the endeavor are MetaStable Capital, Polychain Capital, Multicoin Capital amongst others.

The protocol has obvious benefits in that it enables equal participation and easy accessibility by everyone even with low-end devices, because of the low bandwidth and low space design. This also enables high throughput, because the nodes can communicate efficiently and reach consensus faster.

Furthermore, since the barrier to entry is low, this ensures wide distribution of nodes ensuring greater decentralization without relying on central intermediaries. The protocol also has an obvious privacy-focused design, where the SNARKs can allow information to be verified whilst being hidden mathematically.

There are three basic roles in the Mina network, each responsible for the smooth and secure operation of the blockchain. They are as follows: 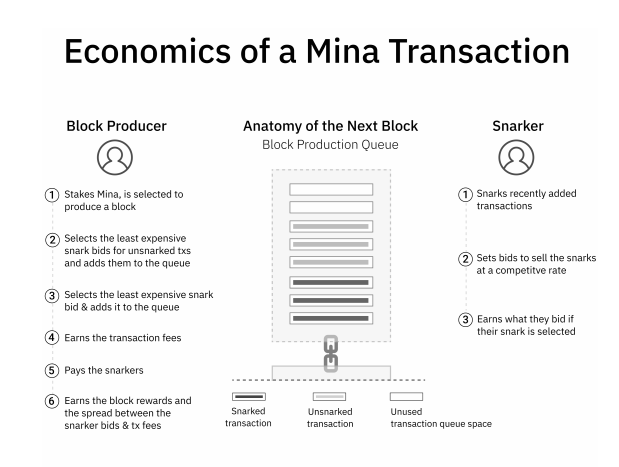 Verifiers are responsible for continuously checking the state validity and maintaining the integrity of the network. They do so by downloading a small zk-SNARK, which takes a few milliseconds to compute and results in certification of consensus information by routing Merkle roots to a recent ledger state. At this point, verifiers can check relevant parts of the blockchain, especially the account balances.

The block producers are responsible for producing blocks on the network by providing computational power and processing activity. They are incentivized by block rewards and fees paid by protocol users. It features an auction type mechanism, where block producers will include the transactions with the highest fees first and then proceed from there. As common with POS systems, stakes can be delegated to block producers.

Snarkers are network participants, providing zk-SNARKS for transaction verification to block producers, who are required to SNARK equivalent numbers of transactions as they are included in a block. They rely on posting bids or fees for their services. If accepted and utilized, they are paid by block producers from the total transaction fees. And since block producers naturally want to minimize the cost and Snarkers have to remain competitive, it enables a cost-effective marketplace. 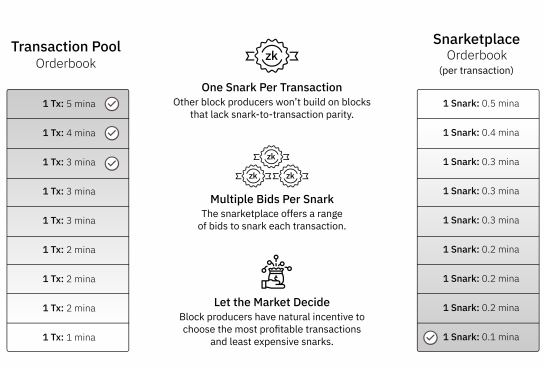 The native asset of the protocol is called Mina, and is required for all activities on the network including as a form of payment and as a reward for network participants. Mina’s supply isn’t capped and the initial limit is 1,000,000,000 or 1 billion Minas. Furthermore, one Mina is divisible to one billion units called nanominas. This can be manipulated by on-chain governance.

Since Mina Protocol is POS-based, simple holding is penalized by increasing inflation, which dilutes the value of existing tokens and forces users to participate. The block rewards will dynamically adjust in response to the network staking rate to target the specific inflation rate the protocol is seeking.

Mina protocol is working to avoid the blockchain dilemma, in which a blockchain can become a victim of it’s own success, as increasing usage causes the total blockchain data size to rise, making it difficult for most node operators to scale up over a period of time. This makes the network reliant on a small number of operators and become centralized.

Mina’s unique design will ensure that the network can maintain it’s integrity and security, without making any compromises on performance and decentralization. In the long run, the Mina protocol has a shot at becoming the “go-to platform”, if blockchain technology becomes widely used and adopted for general purposes.