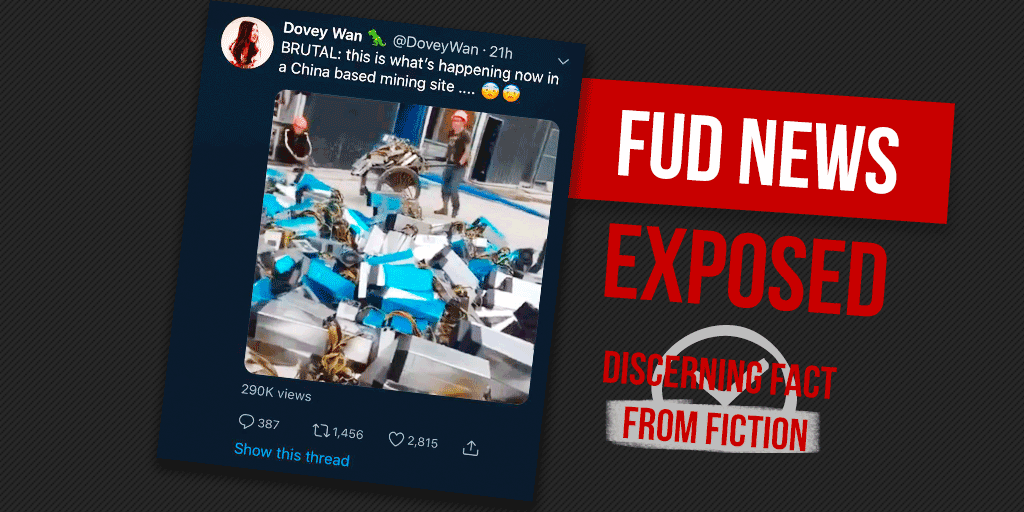 The recent crash of bitcoin prices, with prices dropping below $4,300 on Nov 20th, has led to a lot of panic and fear mongering. There have been tweets and videos reportedly showing the demise of the Chinese crypto mining industry. Mountains of ASICs have been wheelbarrowed out of warehouses and have been basically dumped to the wayside. Pictures showing mining rigs being weighed to be sold as scrap metal because they have lost all value. The profitability of mining has been reduced to nothing and “miners are mining at loss at the current price point, now it’s more economical to turn it off and take it off from the rack to reduce cost on electricity”. Or at least that is what Dovey Wan would like you to believe.

BRUTAL: this is what’s happening now in a China based mining site …. 😨😨 pic.twitter.com/gcN4lVTyBt

The Real Situation on the Ground

While it is true that the drop in bitcoin prices have made mining less profitable, it is not to the extent that some people would portray. We asked a local source, Hu Jie of Si Hua Mining, whether the pictures were real and what the situation was actually like. He commented that the videos and pictures were very likely to be real, but the description that went along with it was misleading and an exaggeration. The mining machines that you see in the picture are older models and this is standard practice in China when upgrading machines. The machines were obsolete and the plan was to upgrade them all along. It is definitely not because of the recent crashes in bitcoin price causing the mining industry in China to go belly up.

Right now, the current price of BTC in China is around 32,000 RMB. According to the picture, which shows up to date information on the profitability of different miners, a lot of the ASIC machines are still operating in the green. This does not even take into account the economies of scale that the really large mining pools can employ as well as their access to cheaper sources of electricity. We also asked Lao Ge of Evolution Capital, and he said that “mining rigs update every 6 months or so, old ones get eliminated”. For the older models that cannot turn a profit anymore due to advances in technology, it is very natural to get rid of them. Rigs have evolved from 100nm to 7nm which has led to huge increases in efficiency.

So what does one gain by FUDing the market? By turning an already shaky situation worse. This brings us back to Dovey Wan, who is the founding partner of Primitive Ventures. This is a long-term crypto asset investment fund. The focus here should be on the long-term. Manipulation and adding more FUD to the fire to drive down current prices even more so that the fund can swoop in and pick up BTC while it is on the cheap. Kicking someone while she’s down is definitely not the way to go about business. Instead, especially through these trying times, we should be focusing more on development and greater adoption and not just trying to earn the next buck at the expense of everything else.

This video was released on Chinese social media around 24 hours ago, this only depicts a hardware refresh not actually the end of the world as some people would lead you to believe.