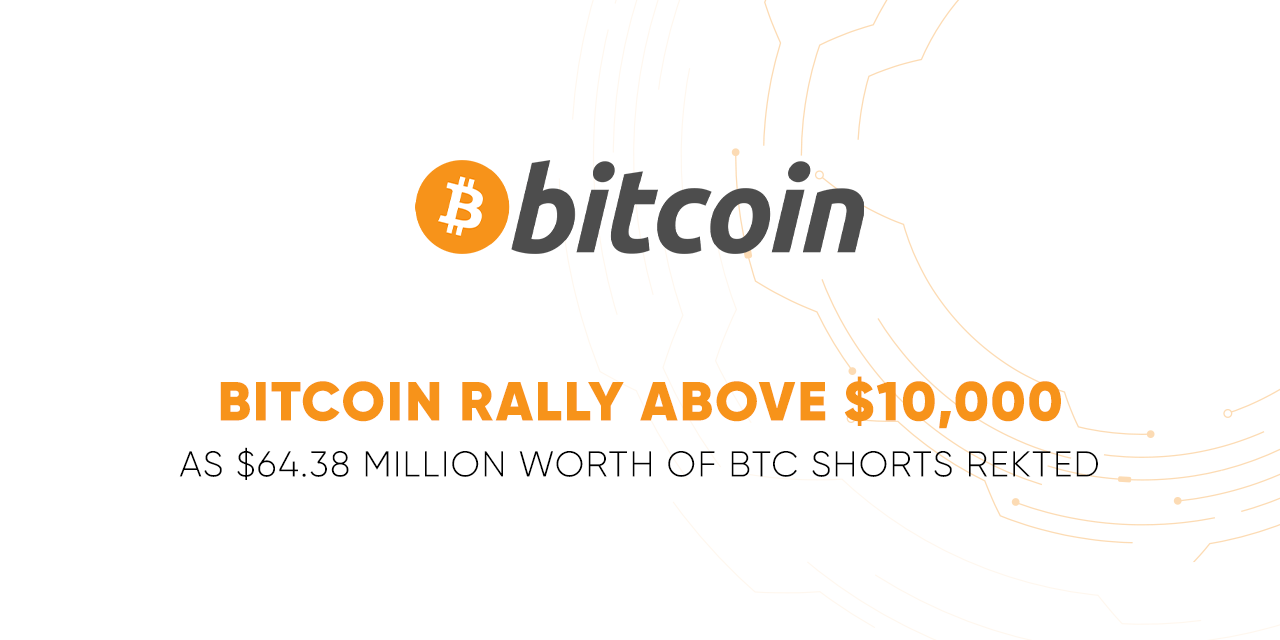 Trading at over $10,000 and printing new 2019 highs, Bitcoin (BTC) bulls are in control, and not relenting. Because of this sharp spike in the last 24 hours, it has been reported that $64.38 million worth of BTC shorts were liquidated in the Derivatives and Margin Trading platform, BitMex.

But it came as no surprise. BitMex describes itself as a next-generation platform from where traders from all over the world can trade Bitcoin and other supported crypto assets. With up-to 100X margin trading on offer, the exchange is popular meaning it is also one of the most liquid in cryptocurrency trading platform in the world.

Presently, the exchange boasts of over $8.1 billion of trading volumes in 24 hours and a whopping $121 billion in the last month. As such, it is emerging that the exchange is one of the most liquid in the world as its exchange audits over 100 accounts per second with zero intrusion since its launch.

All the same, with an extended bear market, many traders who were beating against Bitcoin had their positions closed after the world’s largest coin by market cap effortlessly surged past the psychological $10,000 position with little ease. Chiefly because of margin trading were researched from the exchange revealed that traders were on average amplifying their position on average by 20X, a sharp spike against their original position exacerbated losses, draining accounts.

Through what is called Liquidation of which BitMex went a level deeper explaining that they “employ a partial liquidation process involving automatic reduction of maintenance margin in an attempt to avoid a full liquidation of a trader’s position”, the $64.38 million of loss registered in the last 24 hours was an attempt by the BitMex system to automatically reduce the risk limit of affected traders. Consequently, that meant a reduction of margin requirements and therefore the liquidation at a price better than bankruptcies.

All the same, the surge of Bitcoin has been welcomed by the community. Analysts are attributing these tailwinds to the announcement of Libra by Facebook. The Stablecoin which will be a reflection of the world’s diversity and pegged against several world fiat currencies is set for launch at a tentative date in the first half of 2020.

Boasting of over 1.7 billion users spread across the world, Facebook intends to create a circular economy. Although Facebook’s Libra will open up doors and ease processes, disruptive the way funds is sent, Bitcoin will surely be the biggest beneficiary.

Then again, around the same time next year, there would be a halving process combined with a period of political uncertainty as the US goes to the poll.

A Moment of Bitcoin FOMO

Technically, there has been a paradigm shift. The surge past $10,000 is enough confirmation for critics that the dreaded, value wiping crypto winter is all but over. As bulls press the buy signal, Tom Lee’s projection that there will be a FOMO moment once prices rally past this cap is true. Hours after the spike, Bitcoin is trading more than $800 above the level and looks likely to rally towards $15,000.

Accompanying this increase is a remarkable increase of market cap. At $302 billion, Bitcoin dominance stands at 58.9 percent from normal coin trackers as Bitcoin’s trading volumes surge 11.8 percent in the last day.

The last time, ahead of 2017 Bull Run, it only took three weeks for the crypto’s market cap to double to $600 billion as BTC rocketed to trade above $18,000. Following this trend is ETH’s and LTC’s trade volumes which are up 11.1 and 7.7 percent in the 24 hours as USDT related volumes peak dominate.