Enecuum is a mobile protocol for Web 3.0 applications that aims to bring blockchain and cryptocurrencies into mainstream use.

The goal of democratizing blockchain technology is indeed a Herculean task. Even with blockchain’s massive benefits and rapid expansion, it remains out of reach for millions. Luckily, one project, Enecuum, dared to establish a platform that aims to open the floodgates of blockchain to let more people take advantage of this never-before-seen innovation.

Enecuum is a mobile blockchain protocol for Web 3.0 applications. It is a decentralized ecosystem that aims to bring blockchain and cryptocurrencies into mainstream use.

The platform wants to bring every mobile and desktop device into a blockchain network to let everyone experience the security, privacy, and transparency it can provide. The platform says that all the connected devices in its blockchain may share their untapped processing power.

The more devices join its ecosystem, the more it can be fast, stable, and secure, which would benefit every user of Enecuum.

To reduce the risk of errors as much as possible, the Enecuum based its smart contract on a strongly-Typified, Turing-incomplete functional programming language, which utilizes the business-oriented SHARNELL Logic.

In this platform, consensus happens through the seamless interaction between three mining algorithms, which are Proof-of-Work (PoW), Proof-of-Activity (PoA), and Proof-of-Stake (PoS). Their combined mining technologies enable Enecuum to be secure, fast, and efficient without sacrificing its performance and output.

Trinity’s cryptographic technology also enables its algorithm to have another layer of security on top of its already strong digital protections. An added security measure provides users with peace of mind that their digital assets are well-protected from cyber attacks. 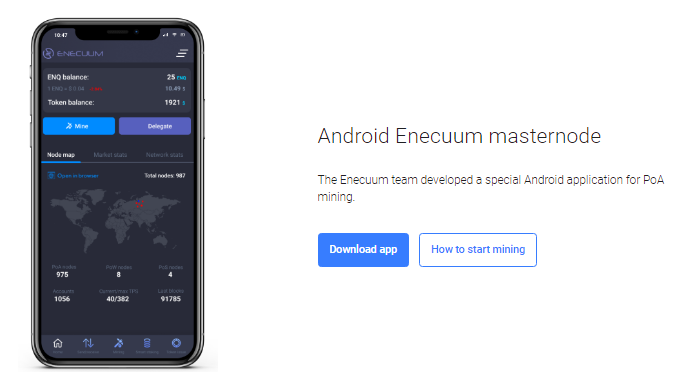 Enecuum, being a decentralized platform, can seamlessly provide benefits to its users, which includes fast, easy, and secure payments, data protection, and flexible stake rewards.

On top of everything it can also offer a safe marketplace for digital resources, tokenization of virtual assets, and decentralized finance (DeFi) instruments.

Enecuum promises that its ENQ app will not drain mobile devices’ batteries. The app only requires a regular specification for devices, which is Android 4.4 (KitKat), a 1HGz processor, and 1.5 GB of RAM.

Unfortunately, crypto enthusiasts who want to download the Enecuum app have difficulty seeing it on Google Play Store due to the Android store’s restrictions on mobile applications made for crypto mining. Google banned such apps on their mobile store due to the technical consequences of mobile crypto-jacking, fraudulent crypto mining apps, and the speculative nature of cryptocurrencies.

However, Enecuum said that it is currently streamlining its mobile app system to be in line with the store’s technical rules and requirements.

You may go to app.enecuum.com to download the app to your device without Google Play. After creating an account, the platform would require you to have at least 25 ENQs, which you can buy on crypto exchanges supported by Enecuum.

ENQ is the native asset of the Enecuum ecosystem, functioning as a utility token that provides holders with exclusive perks, making this token a highly valuable asset to have.

Enecuum has a long list of proposed perks for investors who would hold its ENQ token. The most common benefit, of course, is allowing holders to accumulate and transfer the tokens seamlessly.

The platform also wants to provide holders with the privilege to access complex computations through “heavy” smart contracts. Enecuum proposes that the rewards holders would receive for making these transactions must be decided by market conditions.

Users (holders) may raise the reward for requests that they  place in order to motivate more miners to deal with its computational demands. Holders would also have the privilege to participate in the PoA and PoS mining schemes.

Platform users can also receive ENQ as a reward for participating as a PoA miner for Enecuum’s blockchain operations and the microblock publishing process.

Here is the supply information of ENQ in three different areas:

And if you want to buy ENQ tokens you may go to Enecuum’s supported exchanges below:

Enecuum Referral Program aims to further increase the members of the Enecuum ecosystem and help everyone inside the platform earn more ENQ tokens.

This program has two categories, which are called ‘Agents’ and ‘Referrals.’

‘Agents’ refers to Enecuum app users who share their referral code with others and invite new members to the platform. They are required to have at least 1,000 ENQ tokens in their balance.

They can always buy tokens on Enecuum’s supported crypto exchanges if their balance isn’t enough.

‘Referrals,’ on the other hand, are those who were invited to use the ENQ token and used the code they received.

A referral can only have one agent, while an agent can have as many referrals as he wants. Enecuum allows users to be both an agent and a referral. Also, both agents and referrals get a 10% increase on their rewards for participating in the program.

It is an advanced tool (interface) that allows platform users to create fungible, non-fungible, and mineable tokens and customize them according to their desired utilization.

In 2018, Alphachain, one of the leading blockchain funds in the world, partnered with Enecuum to help establish its 5th generation blockchain.

“We are very pleased that Alphachain has become our partner. This is an indicator of the highest confidence and recognition on the part of their company, which cooperates only with the most promising projects that can change the world,” Mikhail Saifullin, co-founder and CEO of Enecuum, said.

Enecuum has also partnered with other top companies, including Bitcoinvend, GEM Crypto, Rubric, I’M # HAPI, and MY WISH.

Enecuum has integrated various technologies into its platform, which enabled it to create a powerful ecosystem that can provide highly secured, fast, and transparent services.

These outputs are, indeed, the major keys that would certainly catapult blockchain technology into mainstream use.