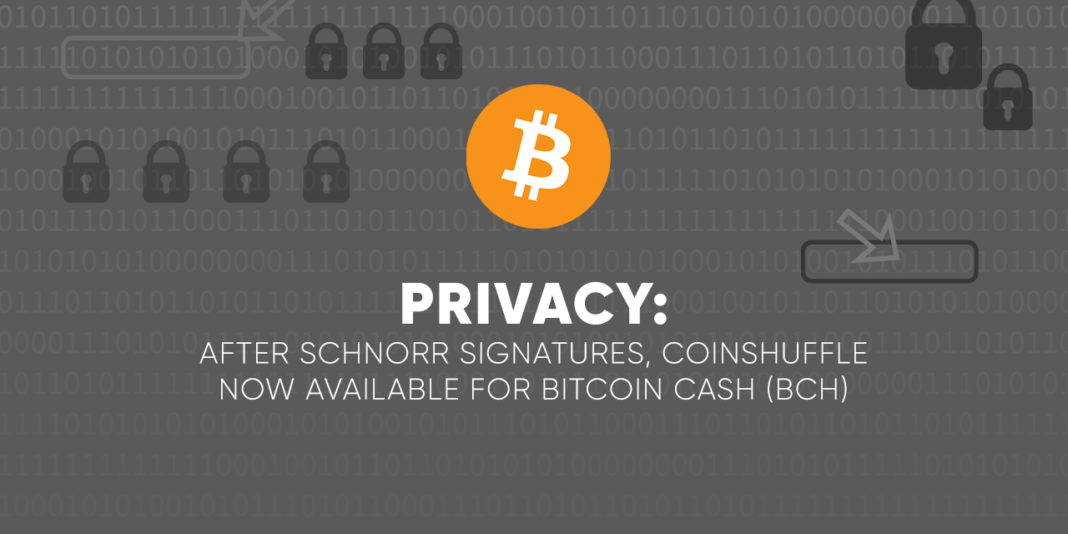 CashShuffle is essentially a decentralized coin mixing protocol through which you can “shuffle” BCH with other network participants. Accordingly, the shuffling process obscures the actual spending. This makes it difficult for blockchain analysis companies to conclusively track network transactions.

Because of this Bitcoin cash wallet will privately keep track of the shuffled and unshuffled coins. All this happens in the background and the wallet takes care of the unshuffled UTXOs. This allows customers to spend their coins quickly without concern about their privacy.

Cashfusion is an extension of CashShuffle and will add a layer of privacy to the transactions. The official Cashfusion specifications stipulate as follows:

‘’CashFusion provides high levels of privacy via a flexible scheme that allows an arbitrary number of inputs and outputs of non-standard amounts. It provides anonymous, trustless coordination with usually zero-knowledge of linkages revealed to other players or the server.’’

This application makes it unnecessary to have a trusted third-party for transaction confirmation and obfuscation. Accordingly, the CashFusion makes the transactions more anonymous as the relationship between the owner’s old and new BCH addresses is concealed further within the shuffling process.

As it is, CashFusion, therefore, is very important in adding to the spectrum of privacy for Cashshuffle. This is because, without the application, it is still possible to consolidate mixed coins into one address. With this further blockchain analysis is possible.

The Possibilities for Bitcoin Cash

After Bitcoin became more popular, its mining difficulty and transaction rates obviously went up. Bitcoin Cash is obviously a product of this tumultuous period.

The decision therefore of fusing Bitcoin Cash protocol with CashShuffle, therefore, a development not only for BCH but also for Bitcoin favorability in general. This is because a comeback for affordability and accessible privacy will certainly excite many Bitcoin enthusiasts as well.

Extended, this could mean that a number of old-timers who have grown cautious over the trajectory could return.

Bitcoin privacy and independence is still a massive draw. Even in the face of increased regulatory interest globally, no one doubts the impact of such a development. Bitcoin cash itself will experience a boost because it can become a scalability solution.

This is why Ethereum founder Vitalik Buterin thinks Bitcoin Cash can be a temporary scaling platform before Serenity or Ethereum 2.0. Buterin stated this in a post to the Ethereum Research on the 13th of July.

As many who follow Ethereum know, the platform itself has faced scalability issues as it became more popular. To assuage this, the developers will look to implement solutions like Serenity and shifting to POS mining in 2020.

Before that, Buterin has suggested using BCH which currently has a throughput of around 53 kilobytes (KB) per second, as opposed to Ethereum’s 8 KB. Such a development would be huge for BCH as a legitimizing development.

BCH has been thorough upgrades like Schnorr signatures in this effort to improve privacy. The vested interest from various entities is a reward for these efforts. Bitcoin Cash will obviously remain Bitcoin’s little brother for the foreseeable further. That said, the auxiliary developments to improve privacy and scalability might just be enough to give it the extra edge.